NFL Predictions Sure to Go Wrong 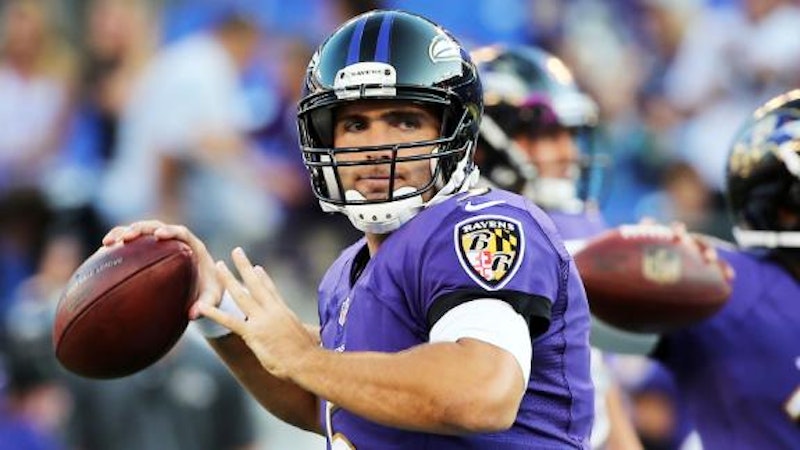 The 2013 NFL season is about to kickoff. The league handed over a barrelful of money last week to make that concussion lawsuit go away and now sits anxiously hoping that none of its players are arrested before Sunday. Much has been made of the Ravens offseason turnover, the suddenly popular Bengals, and the rise of Colin Kaepernick over the past few months. Here’s my attempt at predicting how the NFL season will play out.

•    The Chiefs will give the Broncos a run for their money. Kansas City was awful last season but they added a new coach, left tackle and quarterback in the offseason. Alex Smith was having a terrific 2012 season before injury and Colin Kaepernick forced him to the sidelines. The Broncos are expected to run away with the comically weak AFC West but the Chiefs get to play the Raiders and Chargers too. Denver lost Elvis Dumerville to the Ravens and Von Miller to suspension, and Champ Bailey is already dealing with an injury opening the door for a resurgent Chiefs squad to challenge in the AFC West. I think Denver will win the division but Andy Reid and company won’t make it a cakewalk. A cakewalk sounds like something that would really distract Andy Reid. Oh yeah, I also think Smith makes Dwayne Bowe into a Top 10 fantasy wideout.

•    Ed Dickson will be stealing millions from the Dolphins this time next year. The hip injury suffered by Ravens’ TE Dennis Pitta in training camp has created a golden opportunity for Dickson. The 26-year-old Dickson has let most of his past opportunities slip through his butterfingers. If Dickson can get past the dropsies and provide a reliable target for Joe Flacco he could cash in as a free agent after the season. The Miami Dolphins, who just spent $146 million on mediocre free agents, look like a prime landing spot for the patently mediocre Dickson to cash in after one productive season.

•    Shut up about the Bengals already. My Bengals angst has been ramped up over the past few weeks. Everyone’s picking the Bengals to displace the Ravens as AFC North champs. It’s like everyone has forgotten that Marvin Lewis is still the coach and Andy Dalton is the QB in the Queen City. Dalton looks like a fine player but he is clearly limited in his ability to throw downfield and shrunk in last season’s playoff loss to Houston. The Bengals reportedly had a nice draft adding RB Gio Bernard and TE Tyler Eifert to the squad. As Bernard and Eifert have shot up fantasy draft boards the Bengals stock has also risen. Unfortunately for Cincy this ain’t fantasy football. Dalton still has no reliable target opposite A.J. Green and Marvin Lewis is the definition of mediocrity. Lewis is Jeff Fisher without the porn ’stache. The Bengals will probably make the playoffs in the weakened AFC but I’d like to see them actually win a playoff game before penciling them in for greatness. A playoff win this season would be a first for Lewis.

•    RGIII and Kaepernick will miss three games or more due to injury. Robert Griffin III is reportedly healthy enough to begin the season for the Redskins. Of course, he was deemed healthy enough to play in the playoffs as well and we saw how that turned out. Kaepernick has quickly become the NFL’s tattooed, Dolphins-hat-wearing boy wonder. The read option wreaked havoc on defenses last season but NFL coordinators have had an entire offseason to devise schemes to combat the dual threats likes Griffin and Kaepernick. Mostly they’re going to get hit hard and often. Clay Matthews of the Packers has talked openly about his team’s plans to hit Kaepernick every chance they get. My guess is the pair of young QBs miss enough time due to injury to dash their team’s Super Bowl hopes and the league adopts another round of absurd rule changes next offseason to further protect ball carriers.

•    This is the year Joe Flacco becomes a viable fantasy starter. As a Ravens fan I honestly couldn’t care less about the national perception of Flacco or the ridiculous argument of whether or not he is “elite.” He has a Super Bowl ring and a Super Bowl MVP trophy and that’s good enough for me. Flacco has never put up huge passing stats but he went on his historic playoff run after Jim Caldwell took the reins of the Ravens offense in Week 15 of the 2012 season. Flacco tossed 15 touchdowns and just one interception with Caldwell calling the plays in the final three regular season games and four postseason contests. Yes, the Ravens have traded Anquan Boldin and lost Pitta to injury, but the Baltimore offense is now more about Flacco’s arm than the people he’s throwing to. Flacco got paid in the offseason and now he’s about to make Torrey Smith and Ed Dickson very rich men.

•    I’ll watch less pro football this season than I have since I was a teenager. I’m near certain about this prediction. The league’s quest for world domination under the heavy hand of Roger Goodell has soured me to the product. I love the Ravens and will watch most of Baltimore’s games, and still play fantasy football as a sort of shared male bonding experience, but this is the least interested I’ve been in the start of a football season since the late 1980s. The constant rule changes, the league’s inconsistencies in regards to diagnosing and dealing with head injuries, the over emphasis on offense, the subjectivity of penalty calls, the seeming indifference to PEDs, the fact that the kickoff is likely on its last legs, the spreading of the football calendar from Thursday to Monday, the absurd number of players arrested, the lack of criticism from the National media because they’re all in bed with the league, the smug and disingenuous nature of Goodell, have all soured me to the NFL. You won’t catch me watching meaningless Eagles-Titans or Jaguars-Raiders contests anymore.