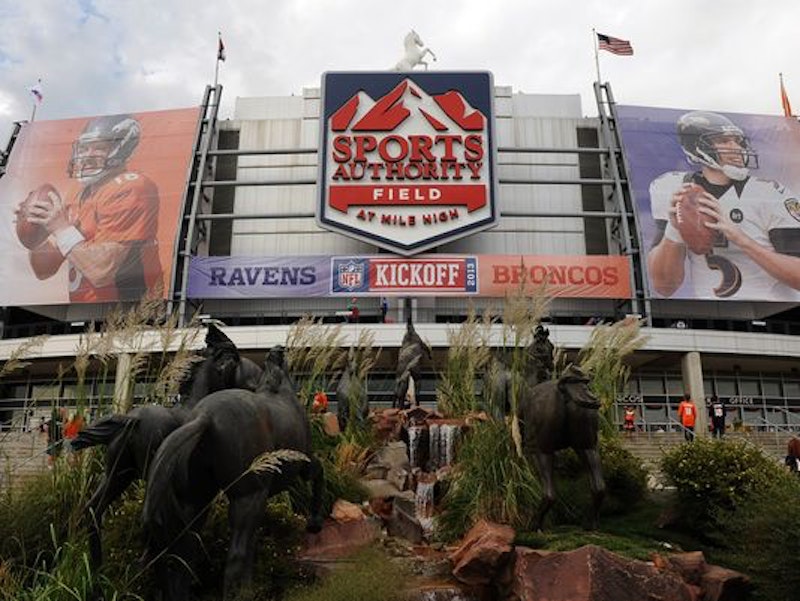 The Raging Harbaughs: I just realized that at least part of why I'm a fan of the Ravens and the 49ers is that it's great, meaty fun to watch the Harbaughs react to pretty much anything going down on the field of play at any given time; an infernal, disgusted vehemence that will play well whenever these dudes score their own Celebreality series.

If you don't have the ability to view every Sunday game via your cable package, other men are silently chucking at your diminished manhood: That's the implication, anyway.

The local park was pretty much empty at mid-day: No need to wonder why.

The First Deeply Freudian New Coors Light Spot of the Season: In which some guy surfs an airwave into a humongous, frosted Coors can flanked by identical, silver-clad woman on a city street, in the summertime. More people might drink more beer if the experience was as psychosexually outré as the some of these advertisements are.

Won't somebody grab Joe Buck a 12-inch from Subway?: He was looking a bit emaciated, but maybe it's just the picnic tablecloth pattern of his shirt.

Fiends on my stoop, like I had the iPhone: If you're reading this article and watching this commercial on an iPhone, than the circle is closed.

The X-Factor, The Voice, So You Think You Can Dance, and Million Second Quiz promos: Watching the reality-television dinosaurs (and, yes, some of the spawn of those dinosaurs) limp forward is getting almost as painful as the realization that this shit, like, really matters to a considerable number of people I don't know. When the judging tables of performance programs are reliably C-list celebrity games of musical chairs, why bother?

Eli Manning: The guy seems so eminently likeable outside of actual football, then you catch a close-up of him in a game situation, and it's impossible to think of him as anything more than a total dick.

Cris Collingsworth: I would argue that Cris Collingsworth is wasted on Sunday Night Football, that his laconic gentlemanly mien would be better utilized in some sort of Mystery Science Theatre/Jerky Boys scenario wherein, armed with a constant supply of tall, cool mixed drinks, Collingsworth crashes big events in podunk towns and provides play-by-play with withering counterpoints provided by Dateline correspondent Keith Morrison.

The lingering sense that our desire to watch men bash one another senseless several times per week is a manifestation of some deep-seated self-loathing and also denial of the meaninglessness of existence: Yeah. So?