The Politics of Hip-Hop Cardio 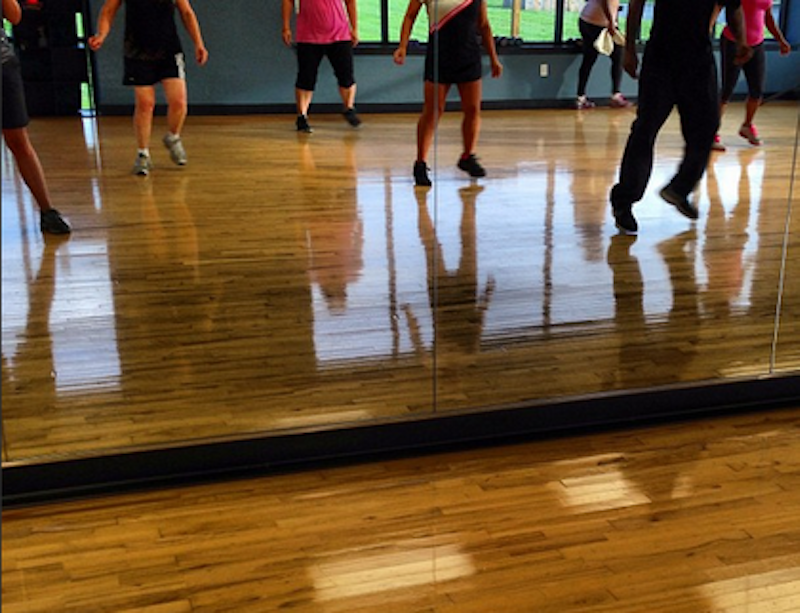 There are two kinds of exercisers in this world: those who seriously work out for health and fitness goals, and those of us who only do it so that we can eat bacon and chocolate. I am firmly in the second category, and in fact chocolate-covered bacon is pretty much my favorite thing in the universe. After losing 50 pounds on a self-invented Bacon Diet, and in order to keep it off, I attend Hip-Hop Cardio class three-four times a week. I do not work out on icky machines sweated on by other people. I just enter the gym, go to class, and leave since many gym-goers frighten me. They kind of glare at you because they know you’re not a true believer.

Both kinds of exercisers, the fitness lifestyle types and the cupcake erasers, are in my class. Some of these women work out before class, after class and could tell you how many calories they burned during class because they have technology on their watches or shoes. I glance at the clock because class ends at 10:15 and as we all know McDonald’s unfortunately only serves Sausage McGriddles and hash browns until 10:30, so I need to wrap up that cool down and get out of there before they switch to Big Macs (who the hell eats Big Macs at 10:30? Seriously, breakfast shouldn't end until 11:00). I don’t want to be “ripped” and definitely don’t want the body of a 12-year-old boy, but I do want to try to stay in my current dress size without ever being hungry, which turns me psycho.

The main way you can tell the difference between the two opposing factions in hip-hop cardio class is our preference for dance routines. The crowd I’m in is there to dance and have fun: in our minds, we’re out dancing in some swanky club wearing fabulous outfits and heels instead of panting and sweating in Old Navy workout clothes looking uncoordinated. So we like the dancier numbers where we can rock out and shake our asses like 1980s MTV hair-band girls. The calorie-burning crowd is there to burn calories. They want to do the high-impact routines where jumping jacks, squats, and other painful, ugly exercises are involved. More than three of this type of songs in a row causes our crowd to sideways glance at each other, roll our eyes in the direction of the “we’re jogging in-between songs, too!” crowd, and cast pleading glances in the direction of our instructor.

There is one woman who is sort of the unofficial umpire/mayor of our class. She is definitely on the athletic side and is in perfect shape, but she also likes the dancier songs, and doesn’t want to do five songs involving painful abdominal repetitions-with-bouncing in a row. Her place in the workout room is always the same, even in a crowded class, room is made for her to go to her spot should she enter late. When our instructor walks to his iPod to change the song, he will sometimes look up to the mirror and she’ll give him a scrunchy-face nod-off, like a catcher would give a sign to a pitcher, for a song he was thinking of doing. It’s in this way that the politics of the hip-hop cardio class are in balance. It wouldn’t be fair to the calorie-burners if we just did fun dance numbers the whole time, because they would be unhappy about not burning enough fat, not that they have any. And it wouldn’t be fair to the “I just want to eat pizza after this” girls like me if we had to do all high-impact songs that cause strain to our inevitable weak spots (knees, back, Achilles tendon in my case).

The politics in hip-hop cardio are silent; mirror glances are really the only method of communication; it’s like we are some kind of Lord of the Flies society. When our Umpire/Mayor/Pig Head carrier isn’t there, the calorie/dance scale is off balance; it’s anarchy at the gym, and if there aren’t enough chocolate girls in the room, I end up glancing at the slow-moving clock more often, since I don’t want to miss the hash browns at McDonald’s.