“Play hard, party hard” has worked for the quarterback, so why mess with it? 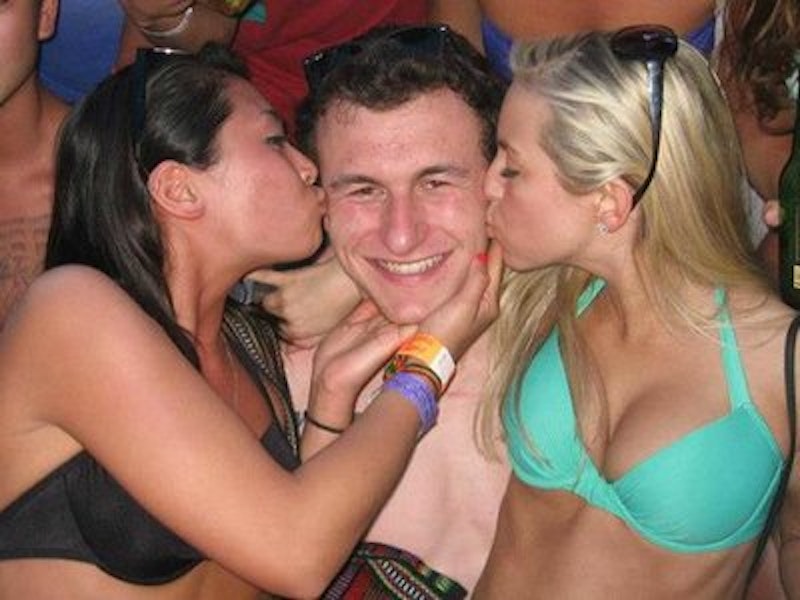 Cleveland Browns quarterback Johnny Manziel posted a photo posing with his dog on his Instagram account on January 3. The photo had a location tag for Avon, Ohio, the Cleveland suburb where “Johnny Football” resides, and was accompanied by the hashtag “#SaturdayNights.” While his fans were assured “Johnny Football” was safe at home on the eve of the final Browns game, he’d actually pulled a fast one, as he was spending that Saturday in a Las Vegas casino, decked out in in disguise with a blond wig, fake mustache, and hoodie. Manziel wasn’t playing in the football game due to a concussion he’d suffered, but was scheduled to meet with a team doctor the next morning. He skipped that, and didn’t show up on the sidelines for the game either, so it looks like he’s doing his best to get cut from the team. The fans were not happy.

The Browns management is running out of patience to get the 23-year-old to put his frat boy days behind him. Manziel likes to party, which is no secret, and despite going to rehab over the off-season for an undisclosed condition, and claiming to emerge as a new man, photos of him with a bottle in his hand keep showing up on the Internet. He’s doing things his way, for now, but it will probably be in a different NFL city soon.

Manziel won the Heisman Trophy as a college freshman, and he showed flashes of his old talent with the Browns. Another team will take him on, with all the baggage, because quarterbacks are the NFL's most sought-after commodity. It could happen like in Dallas, when a series of off-field incidents by star receiver Dez Bryant prompted team owner Jerry Jones to place a set of unprecedented restrictions on the player, including a midnight curfew, no drinking or strip clubs, and a security person assigned around the clock. Bryant was born to a 14-year-old mother who did time for selling crack, and I’m pretty sure he would have signed off on house arrest if that’s what it took to save his escape from such misery. Unlike Bryant, Manziel came from privilege, and he lacks the hunger and humility that a hard upbringing can instill in an individual. Jones would love to take on the Manziel project, but I don't think the player’s ready to submit.

Maybe a team will risk a novel approach with him. Though it’s anathema in today’s staid NFL, I say let Manziel run wild and see what happens. Does anyone think the Jets monitored Joe Namath’s alcohol intake when he led them to their upset win over the Baltimore Colts in the 1969 Super Bowl? Lawrence Taylor, perhaps the greatest defensive player in history, would show up wrecked for the Giants morning practice after a night of booze and drugs, and coach Bill Parcells wouldn’t do a thing. There were a special set of rules for players like Namath and Taylor, and the other players didn’t complain. They knew who was winning the games for them.

I wonder if letting Manziel party is any riskier than picking him up and trying to change him like the Browns did. He’s not going to straighten out unless he wants to, as his failed, extended rehab stint demonstrates. Teams won’t have to pay as much for him now that he's damaged goods, lowering the risk level even more. All players have to make major adjustments to succeed in the NFL, but it doesn’t always happen overnight when you’re just out of college. A team that couldn’t draft a quality quarterback or pick one up in free agency could take Manziel, sit him in an office with management, and say, “Hey kid, we’re going to give you a year to let you do it your way. This is your team now, and your personal life is your own business. Just show up on time.” You then structure his contract so not too much money is guaranteed, which is not uncommon in the NFL.

Who cares if Manziel parties during the bye week, which got him suspended at Cleveland? He's a kid who was a BMOC at Texas A & M not long ago. You can’t expect him to become an adult overnight. The stodgy, corporate NFL could use a little more color too, and photos in the media of a swaggering quarterback out on the town could be the ticket. Peyton Manning is arguably the face of the NFL, but he’s about as exciting as Velveeta on Wonder Bread. Manziel’s got a winning formula—just like Namath and Taylor, Kenny Stabler and others did back when football was more fun—and it involves playing football and partying, so why mess with it? Like long time Oakland Raiders owner Al Davis put it, “Just win, baby.”