Fearing blowback, he avoids commenting on a very big issue. 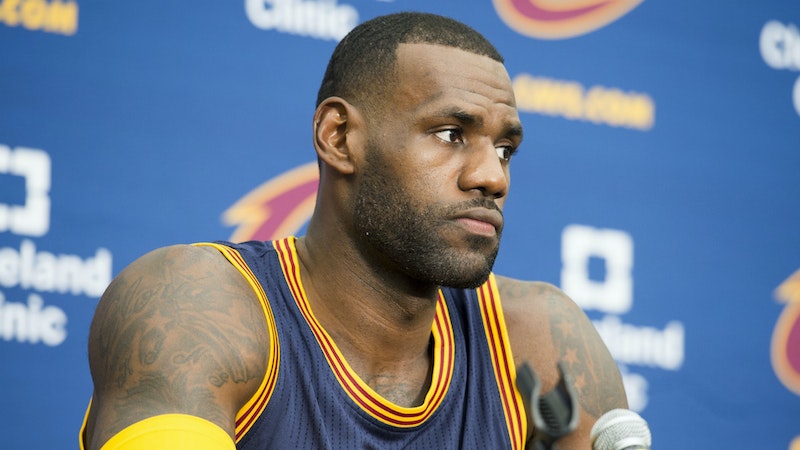 NBA superstar LeBron James has a lot on his mind these days. As the prodigal son who’s returned from exile in Miami, he's now supposed to atone for his sins by delivering multiple championships to the Cleveland Cavaliers, who’ve yet to win one in their franchise history. Miami, with its flashy boardwalk and beautiful people, can shrug off the loss of James, but not the Midwestern city sometimes called the Mistake on the Lake. Clevelanders are counting on James to be a Messiah now that he's back in the fold. It's a lot of pressure, especially when you're a local boy.

Piling more baggage on James’ shoulders has been the emergence of Steph Curry as a contender for the title of world’s greatest basketball player. Curry’s Golden State Warriors beat James’ Cavaliers last season in the NBA finals, and then started out this season with 24 straight wins with their head coach out on sick leave. Now James has to face the prospect of going mano a mano every year against the younger, still improving Curry to win all those trophies Clevelanders expect from him.

The Herculean task James is shooting for in Cleveland takes tremendous focus. Winning an NBA title requires talent, but talent alone is never enough. There's a reason why you always hear about sports teams looking to avoid “distractions.” A team’s success is based on the will of its players being honed in on one goal—winning. Distractions are cancers in a locker room, and James now finds himself facing one.

The Cleveland grand jury’s recent decision not to indict the officer who fatally shot 12-year-old Tamir Rice last year is putting James in an awkward position. When a black child in Cleveland gets gunned down by a cop with a bad work history, the most prominent black man in Cleveland is expected to weigh in. The problem for James is he doesn't want to weigh in on Tamir Rice. It's too hot for him. If he thought he could let it blow over, he forgot about people like Shaun King, the black activist and New York’s Daily News columnist. “I honestly assumed that 400 days after Tamir Rice was murdered, LeBron could at least form a coherent, mildly courageous statement on Tamir,” King tweeted out after a press conference in which James, asked about Rice, replied, “I haven’t really been on top of this issue. So it’s hard for me to comment…I don’t have enough knowledge about it.”

James might be the only black person in Cleveland who could say that. It’s been national news for over a year. It’s hard to escape the conclusion that James is lying in an attempt to sandbag the press. I realize that James is no Kareem Abdul-Jabbar when it comes to social issues, but does he really think he can be this anodyne on a matter so huge to the black community? I thought he’d fired his handlers after the time he told Cleveland he was taking his talents to South Beach.

It's one thing to be called out by Shaun King for having no opinion on Tamir Rice’s death, but now James is also facing calls that he sit out games to protest the injustice. People have set up the twitter hashtag #NoJusticeNoLeBron for James’ convenience, though they neglected to consult him on the matter. These crusaders wouldn’t be content with the athlete speaking out on the issue in his own way. They want to tell him how to speak out on it. Most of them are not Cavs fans, I'm guessing, and I doubt any could explain how James could accomplish something tangible by letting his teammates and fans down and violating his contract. What worked with the football team at University of Missouri will not work with athletes getting paid at the LeBron James level.

We're now decades away from the activist era when Muhammad Ali boycotted the Vietnam draft and John Carlos and Tommy Smith raised their fists in black power salutes on the podium during their medal ceremony at the Mexico City Olympics. The modern athlete is much more calculating. Michael Jordan is alleged to have replied, “Republicans buy shoes too,” when asked why he didn't endorse a black candidate for office, and whether or not he actually said it, this quote is an accurate reflection of James’ mentality to a certain extent.

James has to understand the Tamir Rice case better than he admits. It's not that complicated. Rice never even pointed his toy at the cop (who was fired from his previous police job for “deficiencies”), who shot him in less than two seconds in a state with an open carry law. He's been weighing the pros and cons of speaking out, and so far the cons are winning. He's thinking of his business empire, or the cops who will be mad at him, or other ways this could blow back at him. He's thinking like a corporation. He's got young kids of his own who could be targeted by the police some day, adding to his responsibility. He shouldn't sit out any games in protest, but he needs to find a little more courage soon.