Baseball Season in the Snow

My stint as a nervous travel mom begins. 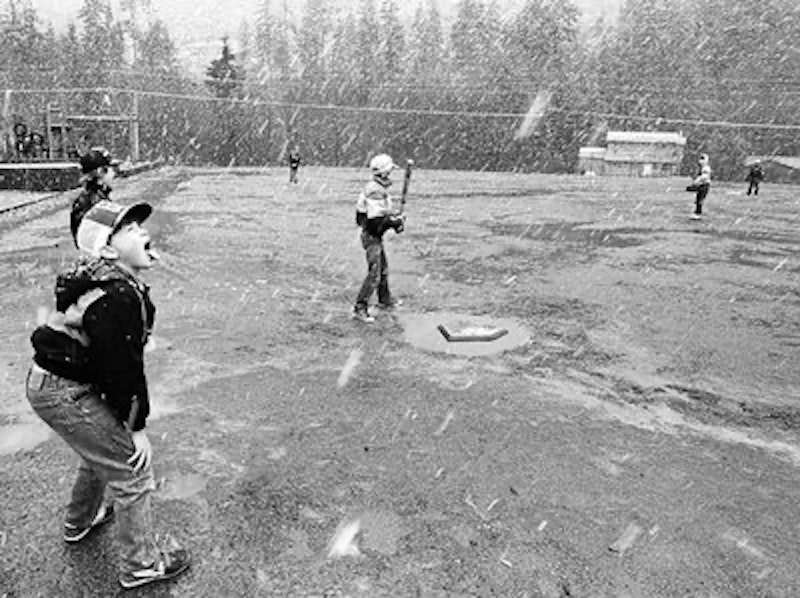 My son is 10. He’s played baseball since he was four. My husband has coached or assistant-coached a bunch of his teams, and I’ve kept score for almost every game he’s ever played. I’ve written before about my opinion of travel baseball, and it wasn’t a glowing recommendation. I’ve never believed that spending money sending first graders out of town to play a sport that chances are they won’t ever play professionally makes any sense.

Bobby loves the game. He comes home from school and throws to his pitchback net to the point that the nets wear out. He begs his sisters to have a catch with him if his dad isn’t home, and has even been surprised to learn that his mom can catch and throw a ball just as well if she’s the only one around. He’s a good pitcher and infielder. His statistics last season in rec league ball were pretty outstanding, and I say that as the statistician who kept them, not as his mom. So when he went to a baseball camp over Christmas break to get warmed up for spring, he was recruited to try out for a local travel baseball team owned by a former Baltimore Oriole.

After some debate, we decided to let him, mainly because he begged us. As it turned out, my husband was out of town and I had to bring my son to the tryout. There were four coaches and one other kid there, and the former Oriole was coaching an older kid at the same time. One of the coaches asked where Bobby came from, as though it had been some sort of elite Canadian eight-year-old minor league team. “Rec,” I said, proudly. Another coach asked where else he had played. “Just rec,” I said. “He just loves baseball. We were trying to hold off on travel until he was a little older, so this is his first travel ball tryout.” I thought the scene was intimidating, but I watched as Bobby pitched, batted and fielded the ball for 90 minutes next to the other player. Bobby was told they’d let him know, I didn’t embarrass Bobby by throwing up or passing out, and we left.

Bobby seemed kind of down, worried he wouldn’t make the team. I said it didn’t matter, he’d still pitch on his rec team the same way he did last year no matter what happened. We talked about the summer we spent watching baseball movies together. You remember The Sandlot, right? Yes, mom. Those guys didn’t have fancy uniforms or go anywhere for tournaments. Point is, doesn’t matter who you play for, or where, or how much your bat and glove cost, does it? No, mom.

His father and I have long held the opinion about travel ball that, having watched how other parents and travel leagues operated, Bobby would have to ask us and want it pretty badly for us to consider allowing him to try out. He’s the youngest of four kids, with two college-tuition age sisters. It wasn’t that we minded spending the money, but we wanted to be sure he was committed to the practice and playing time. We talked about increased responsibility. The trash needs to get taken out without complaint, laundry put away, room cleaned, showers taken every day without reminders, homework done. If you’re ready for a new level of baseball maturity, then you’re ready for a new level of life maturity.

He made the team the next day (excuse me, “signed with the team,” if you ask him). Now, for the first time, he practices indoors, with snow on the ground. And, of course, I worry. I nearly had a stroke the first day he went up to that pitching mound last season, and spent every inning he was up there on the edge of the dugout bench, a wreck. So now I have a season of being in the bleachers with travel moms I’ve never met—as the new kid, I imagine Bobby won’t even play much, and when he does, I’ll barely be able to watch. Thank God his dad is coaching his rec team again this season (travel is on weekends, rec is weekdays) and I’ll still get to keep score—my baseball comfort zone.

I know he’ll learn so much, and he’ll do what the coaches teach him, and even what I’ve taught him to do when he’s up on the pitching mound—take a deep breath in, let it out, then throw the pitch. But things will be different this year in front of two travel teams, all those coaches and parents, most of whom I assume care a lot more about winning than I do. I only care about protecting my son's love for the game.

Will Bobby ever be a Baltimore Oriole? Probably not. But he likes to dream that he will, and who am I to tell him his dream won’t come true?