The Street Fighter of Tennis Ends a 20-Year Career 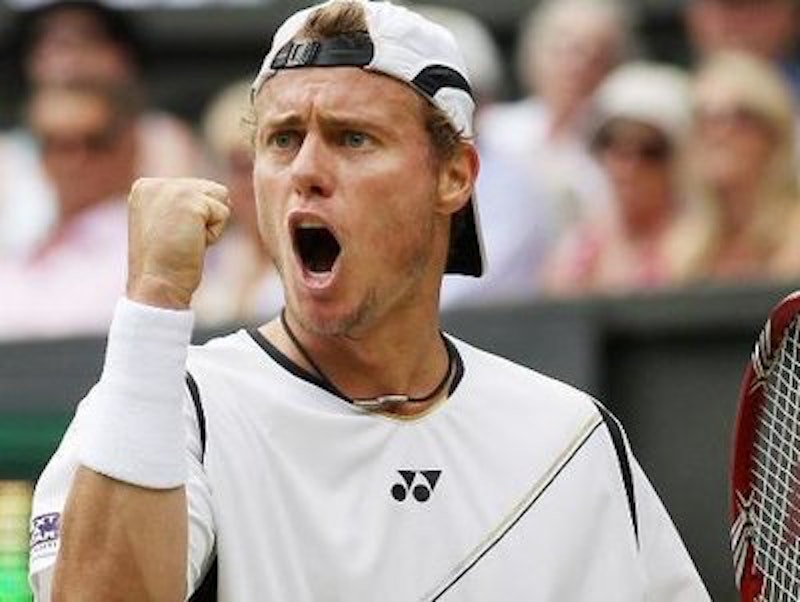 Tennis great Lleyton Hewitt wound up a remarkable 20-year tennis career this week, in a low-key manner, with a third-round doubles loss—after being eliminated in the second round of the singles draw—at the 2016 Australian Open. When you play in 20 straight Aussie Opens, the Australian fans are going to cheer for you. Hewitt left the court to a standing ovation.

Fans knew Hewitt was the hardest working man in tennis, whether he was playing in the Wimbledon final or a first rounder at the Miami Open. This guy was always going to make you beat him. Unlike current male tennis players, Hewitt peaked at 20, when he shocked Pete Sampras at the 2001 U.S. Open in straight sets. He went on to win Wimbledon the following year, and it looked like a new phenom had arrived, but he never won another major title. After briefly ascending to the world number one ranking, he never regained it. If he’d any inkling that this was his fate, however, his body language never betrayed it. He played every point like it might be his last.

Realizing he wasn't going to win a lot of quick points with his relatively diminutive stature and lack of a power serve, Hewitt relied on grinding down opponents with his will, tactical mind, and crisp ground shots. Many great players have had at least one weakness that opponents could attack, but “Rusty,” as he was called, didn't, a big contributor to the longevity of his career. Over time, however, his physical style of play wore his body down. His legs began showing their mileage, requiring multiple surgeries along the way.

While not built to last at the top, Hewitt still left his mark on the game. In fact, he changed how tennis was played at the top by showing you could stand at the baseline and challenge big serve and volleyers like Pete Sampras to come to the net. He’d torment them with passing shots or lobs over their heads. The tennis world sure took note. The pure serve and volley player is a rarity in tennis now. Baseline players—such as world number one Novak Djokovic—rule the courts now. It's not much of a stretch to say that Roger Federer (also 34) needed Hewitt to achieve the success he did in his legendary career. Federer has acknowledged this, admitting that after losing so many early matches to Hewitt, he transitioned to a baseline game as well. That’s when he began dominating the Australian, not to mention the entire tennis world.

Hewitt’s always been more respected than liked on the ATP tour. Street fighters are like that, no matter what the sport. Hewitt’s constant shouts of “C’mon” hardly endeared him to his opponents, and then there was his habit of fist pumping after they committed an unforced error, a serious violation of the unwritten tennis code. Hewitt’s notoriety peaked at the 2001 U.S. Open, when he appeared to imply that a black linesman was favoring his opponent, James Blake, who’s also black. “Look at him,” he said to the umpire, “and tell me what the similarity is.” Given the pressure of competition and Hewitt’s emotion-fueled approach to the game, this—while inappropriate—is hardly an unforgivable thing to say, but the cloud of racism trailed Hewitt for years thereafter, just as musician Elvis Costello experienced after he drunkenly appeared to racially slur Ray Charles, even though that was not his true intent.

Hewitt is tennis’ ultimate “lunch-bucket player,” in marked contrast to his old friend Federer, who appears to glide almost effortlessly on the court, while remaining untouched from even a whiff of controversy over his career. You have to wonder what he thinks when he sees the antics of a younger Aussie like the talented Nick Kyrgios, who’s been known to tank games when he gets a bad call, or take phone calls courtside. Hewitt’s next gig is Australian Davis Cup captain, so Kyrgios may get to find out exactly what he does think.

I also wonder if Hewitt always thought he could win another major, even 10 years after his last one. In a sense, Hewitt’s opponent was always himself as much as the guy across the net. One battle was to defeat that guy, but the other was to give his all, and he always seemed to win that one. I finally saw Hewitt play last summer at the CITI open in D.C., and I saw he still had this in him. Whether he walked off the court an official winner or a loser, he took away his own victory from every match he played throughout his career.