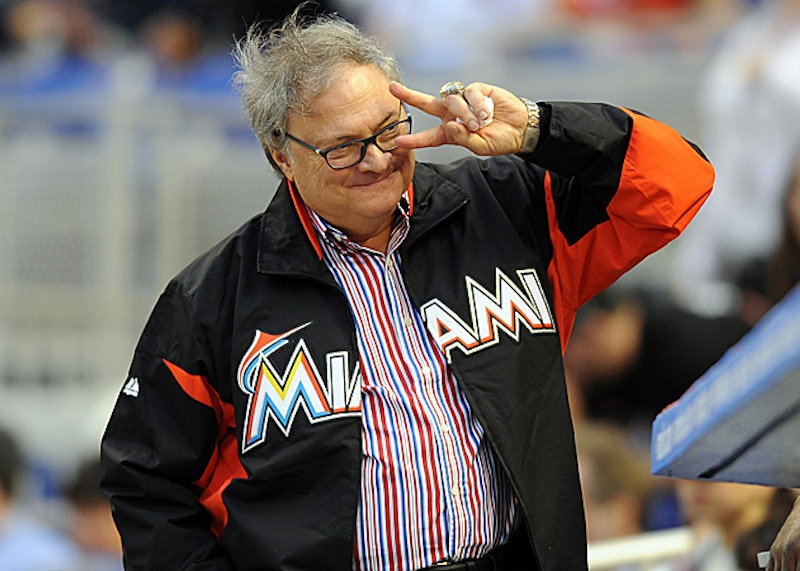 Miami Marlins owner Jeffery Loria is a smart man, which is why I bet the Marlins trade Giancarlo Stanton.

Loria’s also sleazy and a stranger to honesty, as Mark Buehrle can attest to. He is not, however, dumb: Loria makes millions of dollars from the Marlins, and it sure isn’t coming from ticket sales. The Marlins have been exploiting MLB’s revenue sharing system since its inception. He undoubtedly missed that money last year when Miami had an uncharacteristically high payroll. And now, in the wake of “the deal to end all deals,” which every sports writer in America has shared an opinion on, one question remains for Mr. Loria: how far will you go?

There actually isn’t much farther he can go. Aside from Ricky Nolasco, who earns $11.5 million in 2013, Miami doesn’t have any major salary commitments heading into the offseason. Nolasco will be easy to flip, too. The thin pitching market will inflate his value, and while they won’t net top prospects for the “forever unlucky” hurler, they will certainly receive a few useful pieces. Yunel Escobar is owed $5 million: the Marlins will reach a new level of cheap if they trade him for payroll reasons.

And after that, Adeiny Hechavarria’s $2.75 million salary is the highest on the team.

Make no mistake, the Marlins will be a very bad team next year. They do, however, have one of the most talented young players in MLB: Giancarlo Stanton. The slugger is only 23, yet has already accumulated 13.1 fWAR in the 373 games he’s played in. With four more cost-controlled years of team control left, the general opinion is that Loria would be an idiot to trade his future MVP.

The general opinion is wrong. When I say “cost-controlled,” I mean, “somewhat cost-controlled.” If his career continues on its current path, he’ll break arbitration records—likely earning a salary north of $23 million by 2016. Does Loria want to pay that? No, definitely not. Realistically, Stanton will be traded before his second trip through arbitration unless Loria has a sudden change of heart regarding his frugality (which, admittedly, isn’t impossible—he’s a weird dude). Why wait until 2015? Miami won’t be competitive by then, anyways, so why wait until Stanton’s value goes down—it’s at an all time high right now. You can make the argument that he’s now the only attraction for drawing fans to Marlins Park; you can also make the argument that those 5000 fans will only be coming to the stadium because they forgot to cancel their season ticket program.

Trading Stanton would devastate the major league club, but it’s pretty dismal already and can’t get much worse. Nearly every single MLB club would line up to trade for the right fielder, and Miami could rocket their farm system up to an elite level with just this one trade. The Rangers (Jurickson Profar and Mike Olt), the Cardinals (Oscar Taveras, Shelby Miller, and Carlos Martinez), and the Red Sox (Xander Bogaerts, Matt Barnes, Jackie Bradley Jr., Allen Webster) are just a few of the teams who could make incredibly competitive offers.

But the Marlins are a mystery, and in a year’s time, they could be celebrating a World Series victory by signing every free agent in sight. Or Loria could be counting his dough after a historically terrible season. I bet it’s the latter.