Jay Bruce Breaks Out For the Reds

Pulling out of the disappointing 2011 rut. 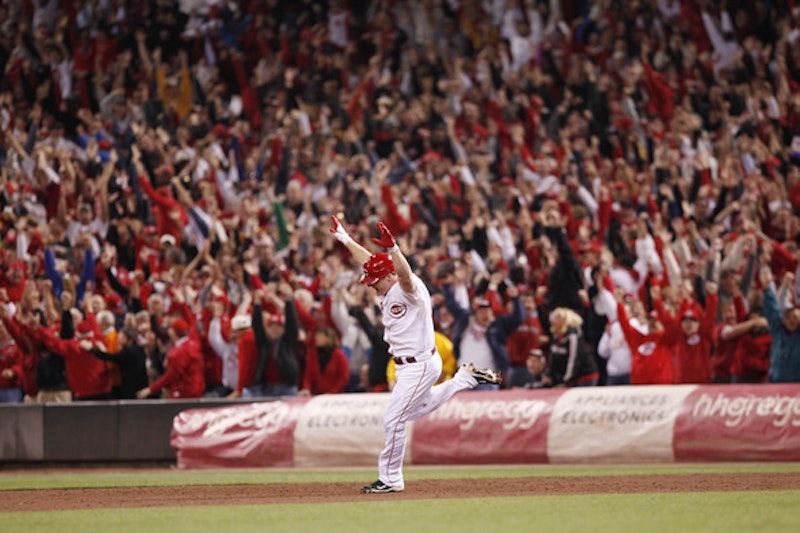 The Cincinnati Reds were a major disappointment last year. After finishing 91-71 and winning the N.L. Central Division crown in 2010 the team failed to build on that momentum. The Reds not only missed the playoffs in 2011, they failed to crack .500, finishing the season with a record of 79-83. The front office responded to that disappointment with an aggressive, free spending offseason.

The Reds traded a package of four players to San Diego for right-handed starter Mat Latos. Then they traded young lefty Travis Wood and two minor leaguers to the Cubs for set-up man Sean Marshall. Cincinnati looked like a big winner in free agency when they agreed to terms with former Phillies closer Ryan Madson on a one-year contract. They wrapped up the winter by signing MVP caliber first baseman Joey Votto to a staggering 10-year $225 million contract extension, and then gave second baseman Brandon Phillips a six-year extension for $72.5 million.

Despite the active offseason and open checkbook Cincinnati sits at just 18-17 on the season. Madson was lost for the season due to Tommy John surgery, Marshall has struggled as closer, and Latos and Phillips are off to slow starts. Even Votto wasn't his usual productive self until busting out with a three-homer game against the Nationals on Sunday, including a game winning grad slam. Votto has just five long balls on the season.

The Reds' biggest contributors in 2012 are a pair of once highly regarded prospects who’ve broken out in a big way. Right fielder Jay Bruce and pitcher Johnny Cueto have been spectacular as we approach the quarter point of this season. Cueto is currently 4-1 with a 1.89 ERA in eight starts. While newcomer Latos has struggled in his first season with the Reds, Cueto has asserted himself as the team's unquestioned number one starter. Cueto has six quality starts so far this season compared to Latos' paltry total of two.

Jay Bruce was originally drafted by the Reds out of a Texas high school with the 12th pick of the 2005 amateur draft. He reached the big leagues as a 21-year-old in the 2008 season. He's shown steady progress each season and now at 25 appears to be on the verge of becoming one of the game's great sluggers.

Bruce set career highs in games, runs, doubles, home runs, RBIs, and walks in 2011. He's picked right up where he left off last fall. In 34 games this year Bruce has emerged from Votto's impressive shadow to slam 10 round trippers and drive in 27 runs. He currently leads the Reds in home runs, RBIs, hits, and total bases. Just as they've done with Votto and Phillips, the Reds have locked up Bruce to a long-term extension. He's signed through the 2016 season for a total of $47 million. Bruce may be the Reds' best investment to date.