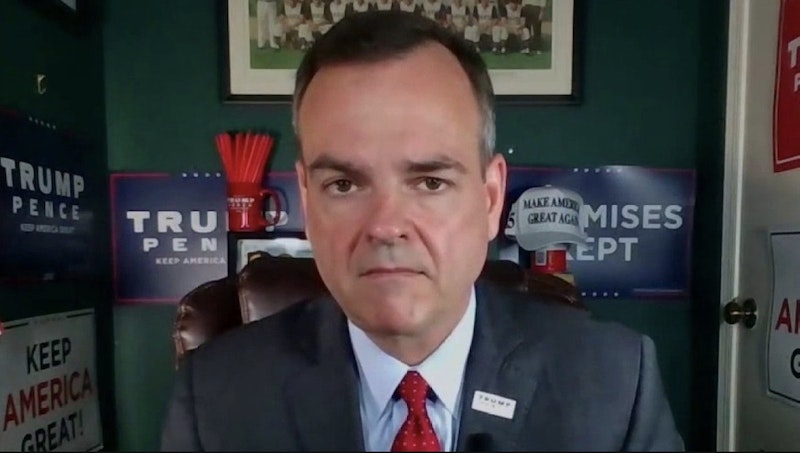 In celebration of the woeful 2020 Pirates earning the first round draft pick next season, I innocently posted a new 1950s card shot of former Bucco manager Danny Murtaugh as my profile picture on Facebook. Something I’ve done before, and this instance brought the usual positive reactions from people familiar with my obsessions. Then I see a post from Joe Fodor, one of the most learned and meticulous editors I’ve known from my lucrative days at Brooklyn Bridge magazine in the early 1990s. Fodor’s message is a sobering one: “Tim, his grandson, is Trump's Director of Communications.” Wha?

It’s true, Tim Murtaugh is the campaign spokesperson for Trump 2020. Fodor was right, he always is. Eagle-eye accuracy from the guy whose parents met on the streets of Pittsburgh on a Thursday afternoon during the Bill Mazeroski home run riot after Game 7 of the 1960 Pirates unlikely World Series win over the Yankees.

I check video footage and it’s sad to see that Tim Murtaugh has a facial resemblance to his grandfather Danny who guided the Buccos to World Series championships in 1960 and 1971. A working-class guy from Chester, PA, who “had the map of Ireland written on his face” according to one old school sports writer. He sat in a rocking chair in the clubhouse after games, and was loved by his players, the press and the fans. So much that he came out of retirement twice to guide the Buccos despite his ailing health.

After finishing journalism school at Ohio University in 1986 I'd dabbled in fanzines during my days in Athens and in between jobs, after a visit to a Columbus, Ohio, baseball card shop, I had an epiphany gazing into a Murtaugh card and decided the old Bucco manager was worth honoring. I created a fanzine called Murtaugh that combined his down to earth grit with the emerging punk rock DIY culture in the Midwest. It was cut and paste and Scotch tape and pilfered Xerox machines. The centerspread was usually a band interview. Cell, Idaho, Trick Babys, Mark Mothersbaugh of Devo.

There were far-flung correspondents, a masked poet from the Bronx, woodcuts from a Williamsburg artist, lots of MLB sass, gothy photos of industrial landscapes and non-sequiturs galore. I had plenty of time to dedicate to this enterprise as I found myself earning dough as a courier driving cash bags to and from Huntington Bank branches all over central Ohio. The zine got some publicity traction and I continued it after moving to Brooklyn under the mentorship of my older sister and her artist boyfriend who then lived in the West Village. The sports-punk combo was a selling point, and it helped me attract cartoonist Tony Millionaire to do a baseball strip in my zine that led to an editor at New York Press enabling me to write whacked-out sports columns for that ground-breaking weekly paper.

The Murtaugh fanzine made some noise especially in 1994 when I took a Greyhound bus to Pittsburgh for the 65th MLB All-Star Game. I made a special color Xerox copy at my trade magazine day job at Billboard publications using their machines after-hours. With 200 issues of a 20-page zine in hand, I boarded the bus and hawked them outside Three Rivers Stadium for $2 per copy. They sold out quickly. Recipients included Joe Garagiola and Steve Garvey. The bus fare was indeed covered, and the baseball autocrats promised no lockout or strike that season but they fibbed and by early August players had downed tools and I was on my way to Spain in protest of these liars.

Other nostalgia-titled zines began to emerge along the same lines such as Zisk (after ex-Bucco Richie Zisk), Yeager (honoring the ex-Dodger backstop) and even the failed ESPN website Grantland borrowed from the Murtaugh zine oeuvre. Working the door at East Village hotspot Sugar Reef in the late-80s/early-90s I gave copies to Martina Navratilova, Jim Jarmusch, Paul Simon, ex-Met Art Shamsky and actor Matt Dillon. A lawyer for the New York Yankees liked it so much he gave me free tickets for awhile (this was during the Stump Merrill era).

As of this writing, Tim Murtaugh was not among the positive-testing COVID victims in the POTUS circle. The Pirates organization has retired his grandfather’s number 40 and he’s also known as the first MLB manager to field an all-non-white nine when on Sept. 1, 1971 against the Phillies he had “all brothers” on the diamond.

Danny’s grandson has of late been tasked with reporting medical test results for Trump cabinet members and White House staff. He graduated from Temple University in Philadelphia in 1992 with a broadcast journalism degree, which might make sense since his granddad was from nearby Chester, PA. I’m not quite sure how Danny Murtaugh would react to his grandson being a regular talking head on Fox News spouting pro-Trump canards about this and that. In reviewing many of these YouTube videos I see he favors tattersall blazers and often wears informal fleece get-ups. But still, when I look at his brow I see Danny and I see this great baseball manager with an askance gaze at Bob Moose coming in from the bullpen or at Dave Cash approaching the mound from second base for a conference.

Murtaugh looked like the manager of a baseball team the same way Earl Weaver, Sparky Anderson or Chuck Tanner oozed the physical traits of the man in charge of a roster of professionals. They didn’t wear their pajamas to the mound (Terry Francona) or have nervous OCD ticks (Buck Showalter) or look like an agent of anarchic utility-man overthrow (Craig Counsell). The fans, players and media adored Murtaugh’s blue collar charm. When I look at the headshot of Tim Murtaugh on Politifact.comI see Danny’s face except Tim’s left eyebrow is slightly arched, the opposite of Danny’s right eyebrow arch. The frown is identical to his grandfather who amazingly managed Pirates baseball during the Eisenhower, Kennedy, Johnson, Nixon and Ford presidencies.

Danny Murtaugh’s integrity has never been in question, such as in interviews with should-be Hall of Famer Dave Parker (“Danny was great because he didn’t treat the clubhouse boy like he was the clubhouse boy,” The Cobra told The Sporting News in 2018). In many of the Roberto Clemente biographies, Murtaugh is lauded for handling Clemente’s delicate relationship with the media. Willie Stargell vouched for him, as did the volatile Dock Ellis who certainly gave the Irishman a handful of challenges on a weekly basis back in the 1970s.Murtaugh did just shy of 30 years in the Pittsburgh organization, with two World Series rings on his fighting fist and 1115 wins under his leather belt.

Murtaugh’s granddaughter Coleen wrote a biography of him a few years ago called The Whistling Irishman. I encountered her at a Spring Training game in Bradenton, FL, where she had a table selling the book. I was wearing my Murtaugh t-shirt, which has the logo of my fanzine in kind of a German expressionist font that includes a cryptic depiction of the manager’s famed rocking chair. It was an icy exchange as she eyed my shirt and I eyed her book. I retreated to the beer stand and my fourth-row seat not far from Chuck Tanner. It was an unnecessary wordless encounter that could’ve gone better and I regret not buying a copy and engaging in some type of dialogue. I checked Amazon and Trump’s employee Tim wrote a review of the book and confessed he co-wrote two chapters assisting his first-cousin Coleen.

Murtaugh’s son Tim, who is Tim Murtaugh’s father, played D-1 college baseball as a catcher at Holy Cross and eventually managed at the AAA level for the Bucs. But as Trump shill Tim Jr. told John Steigerwald of the Pittsburgh Tribune-Review last March, a baseball career passed him by because “I wasn’t that good.” This, apparently from a man paid to label anything not agreeable with President Trump as “fake news” is not fake news. Tim Murtaugh also told Steigerwald that his Republican father’s dabbling into politics in Eastern Pennsylvania steered his career into the shill realm. Baseball has a way of sorting things out, just as reports of  Trump’s baseball prowess at the New York Military Academy in Cornwall, NY are proving to be exaggerations.

But still, online searches that bring up Trump lies followed by “said Murtaugh” are stabbing at my heart in more ways than one. I’d like to think that Danny is spinning in his grave given his grandson’s current line of work.

In an unfortunate reference during a CBS News interview in March, Murtaugh said the Trump administration was “way ahead of the curve” in terms of dealing with COVID-19. Swing and a miss, son, sit down and don’t degrade my fanzine and your grandfather any more than you already have.