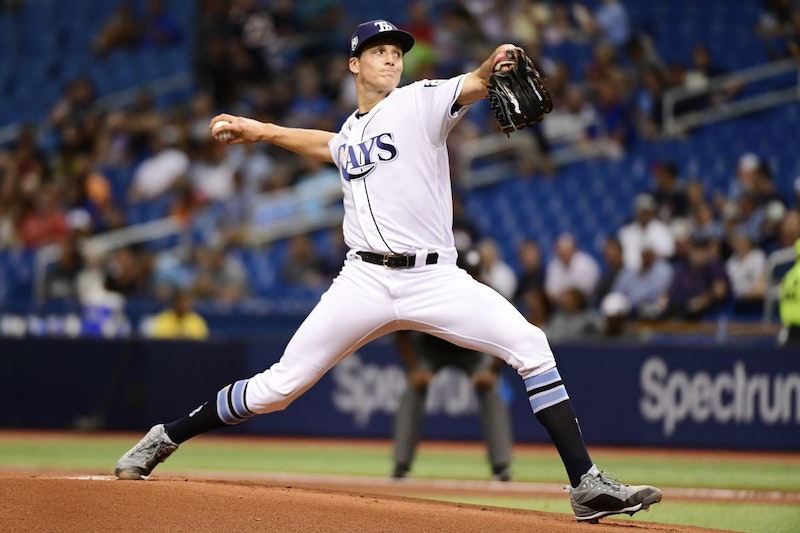 A 60-game MLB season has somehow reached its conclusion. The Miami COVID-Marlins, 18 of whom tested positive during the last week of July, finished 31-29, good enough for the sixth seed in the NL. The new postseason format includes the three division winners and second-place finishers in each division plus two wild-card teams from each league. Sixteen teams will participate in the Best-of-Three Wild-Card round this week. It’s March Madness for baseball. According to the rules of probability, winning Game 1 would generally lead to a 76 percent chance of winning 2 of 3 overall, so let’s focus on the Game 1s.

The AL-best Rays (40-20) face the upstart Blue Jays and their crowd of burgeoning stars. Blake Snell will likely face Hyun Jin Ryu. Both teams will stack right-handed hitters against the lefty hurlers. Toronto’s hopes of advancing ride on winning Game 1, as the Rays will send dominant righty Tyler Glasnow to the mound in Game 2, against the less-polished Taijuan Walker. Cavan Biggio, Bo Bichette and Teoscar Hernandez (if he’s healthy enough to play) are all powerful, but only Biggio boasts an on-base percentage over .370. Tampa’s pitching depth is unmatched. Despite the proliferation of homers we’ve seen across the MLB, and the firepower from both lineups, Tropicana field often boosts pitching.

Shane Bieber and Gerrit Cole will provide the best pitching match-up this week. Cleveland’s Bieber just pulled off pitching’s “Triple Crown,” by finishing tops in ERA (1.63), Strikeouts (122) and Wins (8). Bieber didn’t allow an earned run in six of his 12 starts. That’s Pedro-esque. In a very limited sample, Bieber has handled Aaron Judge and Giancarlo Stanton, though Luke Voit and DJ LeMahieu have had success. Meanwhile, Cleveland’s limited lineup—other than Jose Ramirez, Francisco LIndor and Franmil Reyes—will face last year’s postseason hero Gerrit Cole (then with Houston). The Yankees ace was nearly unhittable last October, making five starts, four of which lasted seven innings, holding opponents to one run or less, while whiffing 47 in 36.3 IP. On the other hand, Cleveland is hot, having won nine of their last 11. But even if Bieber tosses a Game 1 gem, Cleveland is up against it with that Yankees lineup.

The Twins are as loaded this year as the Astros were in previous years, so it’s fitting that the once-mighty ‘Stros have to face Minnesota this time. The trade that sent Kenta Maeda to Minneapolis has done wonders for the Twins. Maeda will toe the rubber having allowed only 50 baserunners in 66 innings pitched, for a minuscule 0.75 WHIP, along with a 2.70 ERA. One caveat, the AL Central lineups he regularly faced (Detroit, Cleveland and KC) were three of MLB’s bottom-dwellers in terms of OPS. Luckily for Maeda, Houston’s once vaunted lineup has looked rather mortal in 2020. Without the benefit of trash-can-bangs (signaling an off-speed pitch was coming), Astros hitters crashed back to Earth. Jose Altuve, Yuli Guriell and Carlos Correa each saw their ISO (isolated power percentage) cut in half this year. Houston will send Zack Greinke out for Game 1. I hope he’ll choose to sit with the cardboard cutouts in the stands between innings. After all of their October struggles—three wins in their last 23 postseason games, this is the year of the Twins. I’m picking them to win the AL.

Both of these teams probably wish MLB had scheduled a 50-game season instead of 60, as both hit some speedbumps in the final weeks of this shortened season. The A’s again have one of the best bullpens in MLB. The White Sox lineup is more fearsome. The Game 1 match-up pits Lucas Giolito of the Pale Hose against the unheralded, suddenly stingy Chris Bassitt of Oakland. Giolito’s impressive follow-up on his 2019 coming-out party included a 13-K no-hitter against the putrid Pirates. Giolito’s presence on the mound makes for fun viewing. Standing at 6’6” and throwing bullets, Oakland’s lineup will face a serious test, and their best overall hitter, Matt Chapman, is out for the year.

While Giolito was a first round draft pick out of high school in 2012 and has come into his own at age 26, Oakland’s Bassitt gets an opportunity for vengeance, facing off against the team that drafted him in the 16th round, back in 2011. Bassitt’s slow-climb to prominence is a story of grit, having missed most of 2016 and all of 2017 after Tommy John surgery. Like other non-flame-throwers in Oakland’s recent past, Bassitt relies on a heavy sinker and a cutter to keep the ball in the park. Against hitters like Jose Abreu, Yoan Moncada and Eloy Jimenez, that’s helpful. The White Sox had MLB’s eighth-best team OPS, compared with the 17th-ranked A’s, though some of the difference can be attributed to their home parks.