Is Brian Cashman Asleep at the Wheel? 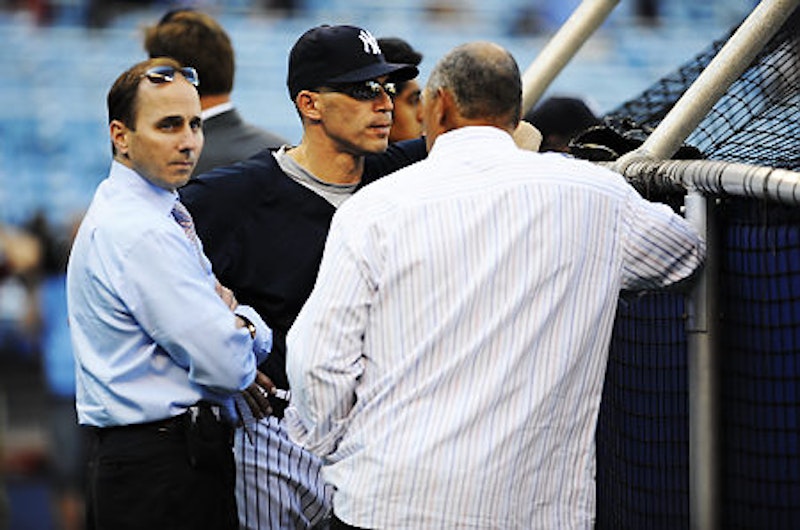 Nothing has made me happier this baseball off-season than Cliff Lee spurning the drowning-in-dough Yankees for the Phillies, who incidentally paid him with an oil drum filled with cash. Lee really didn't do any great charity in going back to Philly. In fact his deal with the Phils has a higher average annual value than the Yankees or Rangers offers. Frankly I don't care how much he's getting, I'm just glad he won't be getting it from New York. The baseball world is so accustomed to the Yankees gobbling up top free agents that Lee was practically penciled into the Yanks 2011 rotation while he was still pitching against them in the ALCS.

Lee rejecting the Yankees is certainly noteworthy but I think the failures of New York's General Manager Brian Cashman deserve some attention. In the past 16 month, Lee has changed teams four times. Cashman had four distinct opportunities to acquire Lee and failed to do so each time. I'm not losing any sleep over those failings but Cashman should be. The Yankees are the league's most expensive team but for some reason don't have more than one reliable starter to trot to the mound in October. Behind CC Sabathia; ancient mariner Andy Pettitte is supposedly leaning towards retirement (I'll believe it when I see it), AJ Burnett looks like an $84 million mistake, Phil Hughes wore out down the stretch, and the dynamic duo of Ivan Nova and Sergio Mitre won't even scare the Orioles.

Cashman's failure to acquire Lee was probably fueled by the thought that there was no need to trade for him. Just like everyone else Cashman may have thought that buying Lee dinner and letting him go for a dive in the Steinbrenner's Scrooge McDuck-like vault of gold coins would seal the deal. Now the MFYs have gone 0-4 in the Cliff Lee lottery and are left holding an empty bag with a big embroidered dollar sign.

The only thing more stunning than the Phillies acquiring three of them is the Yankees acquiring none. If I were a Yankee fan I'd be wondering just what the hell is going on. For a team with unlimited financial resources to whiff on four aces in one year is unfathomable. Just what is Cashman waiting for? It certainly isn't any sense of fiscal responsibility as the team was offering Lee over $140 million. Perhaps Cashman is reluctant to deal prospects due to its core group of aging veterans. I’d think the aging roster would make Cashman more likely to deal prospects for vets as the window of opportunity on the current group in the Bronx is closing. Maybe the real problem is that the Yankee prospects just aren't that good. It's no secret that Yankee Minor Leaguers are routinely over-hyped (I'm looking at you Joba). The name Jesus Montero has been tossed around for two years as the next great Yankee. Montero, a catcher, apparently wasn't good enough to be the centerpiece of a trade for Lee last July or Greinke last week. Montero may be more Dioner Navarro than Jorge Posada. Shame on Cashman if he refused to include Montero in a deal for a proven ace. Cashman has the easiest job in MLB this side of Phillies pitching coach Rich Dubee; he's never had to be particularly creative or resourceful until now. Simply handing over a check won't solve your problems this time, Brian.