Real Men Freeze Their Nuts Off

The Minnesota Metrodome and all these whiny, namby pamby football players. 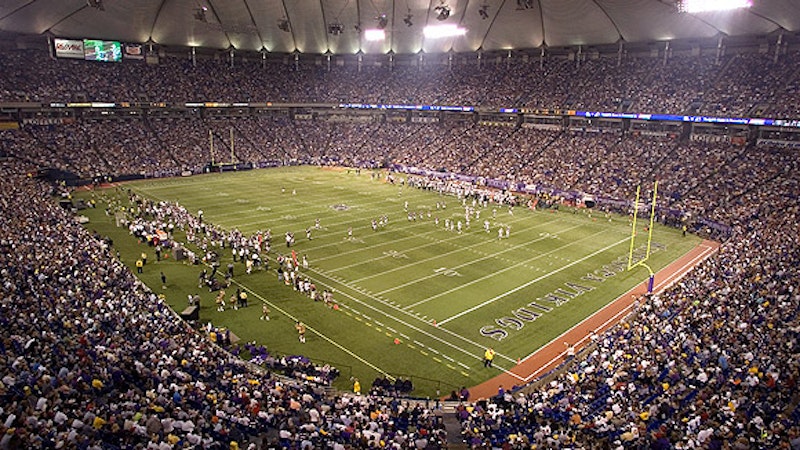 Call me a purist. I think football should be played outside in the elements, preferably freezing cold and snow. Monday Night Football’s broadcast of the Vikings vs. Bears from the outdoor stadium on the University of Minnesota campus was a revelation for this lifelong football fan. The Metrodome, home to the Vikings for the past 30 years, is currently under the weather, literally. The roof caved in on the playing field last week under the weight of over 20 inches of snow. Some would call it a blessing.

If you've never been to the Metrodome you have no idea how horrendous it really is. It's a terrible building and the lack of interior aesthetics are only trumped by the fact that the exterior looks like a shuttered Wal-Mart. The Twins moved into a new outdoor stadium for the 2010 MLB season, ending decades of ground ball triples and homers off the ceiling. The Vikings are making overtures that they'd like to do the same, or perhaps head to sunny SoCal and occupy a new stadium in downtown Los Angeles.

The events of the past week in Minnesota will spark an interesting debate. Players from both teams bitched and moaned last week about the field conditions and the fact that someone could get hurt playing on a frozen field. Excuse me, but aren't you football players? Did you all grow up playing on turf fields in Arizona and Florida? I'm a giant pansy and some on my favorite childhood memories involved playing neighborhood football games on frozen and often snow-covered fields. In fact, whenever snow was in the forecast we’d try to round up the troops to get a game going. There's simply nothing better than tackling your best friend and rubbing his face in six inches of white powder. The players sacked up and played the game Monday night. It was a terrible game because Brett Favre played injured and the Vikings are generally awful, but the field and elements didn't disappoint.

If they can play football outdoors in Green Bay, New England and Chicago they can damn well play outdoors in Minnesota. The Vikings will surely lobby for a publicly funded domed stadium buoyed behind veiled threats of a move to LA. The team's ownership will rightfully point to the construction of the new ballpark for the Twins and expect the same accommodations. There is a perfectly acceptable alternative to the Metrodome, and the Vikings happened to have played there on Monday. The construction of the University of Minnesota's stadium was 48 percent publicly funded. It seems unlikely that the state of Minnesota can justify another publicly-funded football-only stadium just minutes away from its last publicly-funded stadium. It would have made more sense to include the Vikings in the University of Minnesota project and constructed a stadium that suited everyone's needs, with the Vikings kicking in some of their own money to foot the bill. As for the candy ass NFL players who were so worried about taking the field Monday night it won't matter much in a few years when the Vikings are in LA leaving the frozen fields of Minnesota to real men, and kids.