Why baseball analysts and writers slobber over the Tampa Bays' third baseman is a mystery. 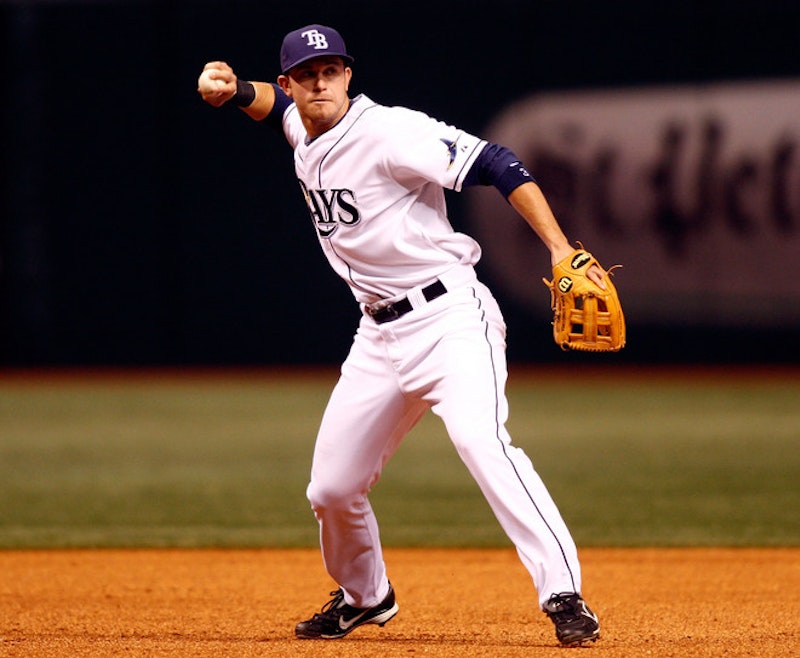 When did Evan Longoria become the best player in baseball? I realize he’s the most valuable because of the ridiculous contract he signed, and he’s probably the most promising too because of his age. But when did he become the best?

Baseball analysts everywhere are praising Longo for his amazing 6.9 WAR, which ties for the sixth best in MLB. What I don’t understand is why he was worth that many wins. I’m hip to the new lingo and can comprehend the values that Wins Above Replacement brings, but when it turns an above average year into an elite one, I get curious. Longoria’s counting stats aren’t that spectacular, actually. He didn’t hit .300, didn’t have an OBP above .380, and he didn’t even club 25 homers. He’s a wizard defensively, though, right? Well, while he’s still top notch, his UZR (which is a ridiculously stupid stat. More on that below) dropped from 17.7 in 2009 to 11.1 in 2010.

Among the players who ranked below Longoria in WAR include Adrian Gonzalez, Troy Tulowitzki, Carlos Gonzalez, Robinson Cano, and even Miguel Cabrera, who all had better AVGs, OBPs, and more HRs. In addition, Longo also finished sixth in the AL MVP voting, ahead of his more deserving teammate Carl Crawford.

Fantasy owners should be wary as well. Longoria plays a pseudo-premium position, so your third base hole may be hard to fill, but he is in no way the best option available. Ryan Zimmerman, Jose Bautista, David Wright and Adrian Beltre will all remain on the draft board long after the Rays’ Franchise is foolishly taken. Of those four, Beltre and Bautista are somewhat questionable because of their career years in 2010, but they both carry as much upside as Longoria. Kevin Youkilis will also be manning the hot corner for Boston this season, and batting behind Carl Crawford and Adrian Gonzalez could potentially boost his offensive stats astronomically. Keep tabs on Pablo Sandoval, too, because if he gets his conditioning issues sorted out (translated: get to a fat farm, Panda Bear!), he could be a monster at the plate next year.

Fielding stats are not 100 percent accurate and shouldn’t be credible because of the way they fluctuate between years. If I was considering UZR as a legitimate sabermetric, like many statisticians are, Longoria would only rank fifth in MLB among qualified third basemen.