A ballgame’s a ballgame, despite some very weird rule changes. I’m watching as always, and trying to will the Red Sox to another World Series championship. 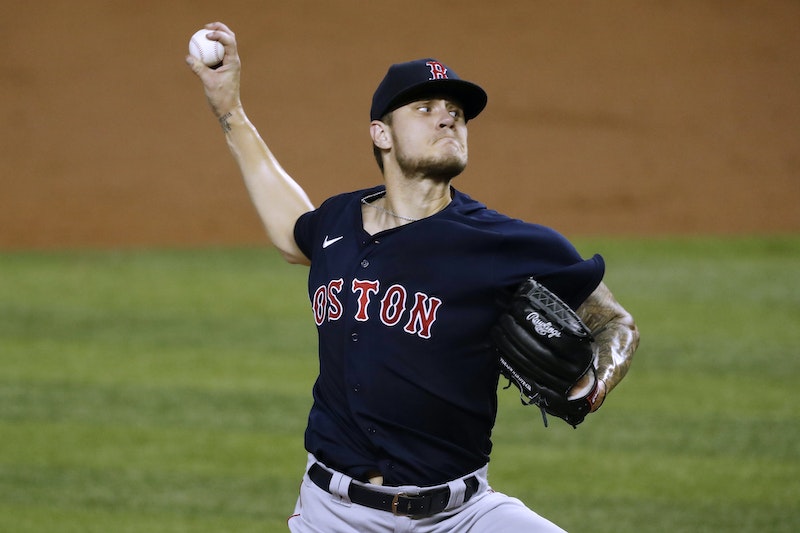 Two years ago, in September, I lamented that the hastily-concocted 60-game Major League Baseball season ruined the rhythm of summer for fans of the sport, which is still the “National Pastime,” no matter what detractors say (and have said since around 1968). Covid, lockdowns and mask debates (not to mention the strangest presidential election in my lifetime, in which Joe Biden caught a break by running a “remote” campaign, drastically limiting his ability to plagiarize and perform Admiral Stockdale routines at every other rally) rightfully dominated the news, and you’d have thought the scumbags that decide on such MLB matters—joke-of-a-commissioner Rob Manfred and his players’ union counterpart Tony Clark—would’ve wanted the good will from us shut-ins happy to see more games.

The length of a proper baseball season, 162 games plus playoffs, that runs from roughly April 1 to the end of October, moves with the seasons—part of spring, all of summer, and a month of fall—gratifies longtime fans, and more on-the-go teens and young adults than you’d think, and is an annual ritual, at least for much of the nation. If your team’s out of contention by August—as the Baltimore Orioles always are—there’s still the diminished but tangible pleasure in seeing top prospects get their first licks in the big leagues. As I recall, the despised—in these quarters at least—the Los Angeles Dodgers won the asterisk-blighted World Series in 2020, against what A.L. team I’m not sure, and don’t have the inclination to look up.

I’m as amazed as anyone that the owners and players—after a suspicious “lockout” by the former—suddenly coalesced on a hodge-podge Collective Bargaining Agreement (CBA) in March and, just like that, after I optimistically speculated to my son Booker and baseball buddies that May 1 might be Opening Day, agreed to a full season that would start just a week late, after a short Spring Training (that will surely fuck up pitchers who haven’t had the customary time to prepare). Could be all wet, but I don’t discount the country’s sour mood—inflation, Ukraine, interest rates, more inflation—egged the two sides on, as a battle between wealthy men just didn’t seem kosher.

On Tuesday, my longtime friend—and extraordinary sportswriter—Spike Vrusho echoed the thoughts of millions of older fans that the new rules and parameters of the CBA have emasculated (can I use that word today without fear of a verbal spanking?) the game to such a degree that ballparks ought to play carnival organ music of the kind that was a warm-up for the huckster preachers who’d travel from town to town and carry home buckets of cash in the mid-20th century. (I’d prefer that accompaniment to the “classic rock” songs that are played today at every MLB stadium; I have no desire to hear snippets of “Won’t Get Fooled Again” or “Satisfaction” in the context of a baseball game. Although I do like hearing The Stranglers’ “Golden Brown,” which for some reason is high in the rotation at Baltimore’s Camden Yards.)

But I disagree with Spike that the game’s unrecognizable; it has, like Barack Obama every six months, “evolved,” not always in palatable ways, but there are still pennant races, spectacular outfield catches (I predict that not long from now a Designated Fielder will be introduced), deft pick-offs by pitchers, towering and cheapie home runs, the occasional on-field brawl—though the fights are more Will Smith than Joe Louis; the replays of the 1970s Red Sox-Yankees melees are classic—and a pitcher plunking a batter either for crowding the plate or retribution, which, dismayingly, elicits “You never want to see that,” scolding from on-air commentators. As the great “color” announcer Dennis Eckersley reminds Boston viewers on NESN, pitchers like Bob Gibson and Don Drysdale would hit a guy in the on-deck circle, “just to stay in shape.”

That said, Spike and I are in accord about many of the changes. He didn’t mention it, but the introduction of a more “balanced” schedule in 2023 is awful; division rivals will play each 14 times instead of 19, and even worse, every club will have 46 inter-league contests on their docket (per The Athletic’s Jayson Stark). I’ve always hated inter-league games (although I’m glad the National League has finally accepted the Designated Hitter; I really don’t care either way on pitchers hitting, but the rules should be the same), since I couldn’t care less about N.L. teams unless the Red Sox reach the World Series. Would I rather see a Sox-Reds game than the Rays at Fenway? Never. It’s a revenue producer dressed up as “fun” and it’s plain silly. I don’t like expanded playoffs; I find banning the “shift” an inexcusable power-grab from managers; and the bigger bases give an advantage to the offense. I think it’s great that umpires will wear mics to explain replay decisions, and though I’m probably in the minority, don’t care at all that advertising will be affixed to players’ uniforms. Thankfully, the seven-inning doubleheaders have, at least temporarily, disappeared, but not the absurd “man-on-second” feature for extra-inning games.

I’ve followed baseball closely (subscriptions to The Sporting News, Sport and Sports Illustrated; I’d pore over the box scores every morning, and when away at Boy Scout camp my mom would send them to me) since I was a kid in the 1960s, when there were two 10-team divisions and the winners would face off in the Series. In 1969, MLB was split into four divisions, and I acquiesced to the change. I forget when the Wild Card was introduced, but that didn’t ruffle me. It’s not like there’s a choice: I was bitter after the 1994-’95 strike, but calmed down. During the lockout, you could see angry fans on social media claiming they’d never watch baseball again, or see a game live, and that was such bullshit.

Anyway, my “predictions” for the upcoming season are as meaningful as anyone else’s, which is to say, without much merit, but as a Bosox fan I always pick my team to win the A.L. East division before the season starts. My buddy Rick, with whom I text back and forth for nearly every Sox game, chides me for this—we’re roughly the same age, endured the Curse of the Bambino, and when Boston improbably made the World Series in 1967 (I still think had Tony Conigliaro not been beaned in August of that year, the Sox would’ve won) as young fellows assumed we wouldn’t suffer the championship drought of our fathers. He’s a pessimist about the Sox, and is heartened when, during a game, I’ll text “Season’s over,” responding, “You’ve come to your senses!” Then the Sox will rally, a closer will white-knuckle the fans but wrap up the game, and Rick texts, “Never in doubt! Duck boats!” On Tuesday morning, Rick said if Boston suffers no serious injuries (aside from Chris Sale) they might win 80 games. Red Sox pessimism. I’m going with 92, with Rafael Devers hitting 50 homers, Tanner Houck coming up big, newly-acquired Trevor Story earning his big bucks and Xander Bogaerts, bucking for an enormous free-agent contract this fall, compiling his best numbers yet. Seems like everybody else is picking the Blue Jays. Next to the Yankees, the Jays are my least favorite team; it’s not rational, but I’m pissed at Canada in general for its bureaucratic government and nutty Covid rules. I hope the Jays finish at 82-80, a game better than the Yanks (the Orioles, whose management is trying for a $10 million payroll, have fifth place locked up).