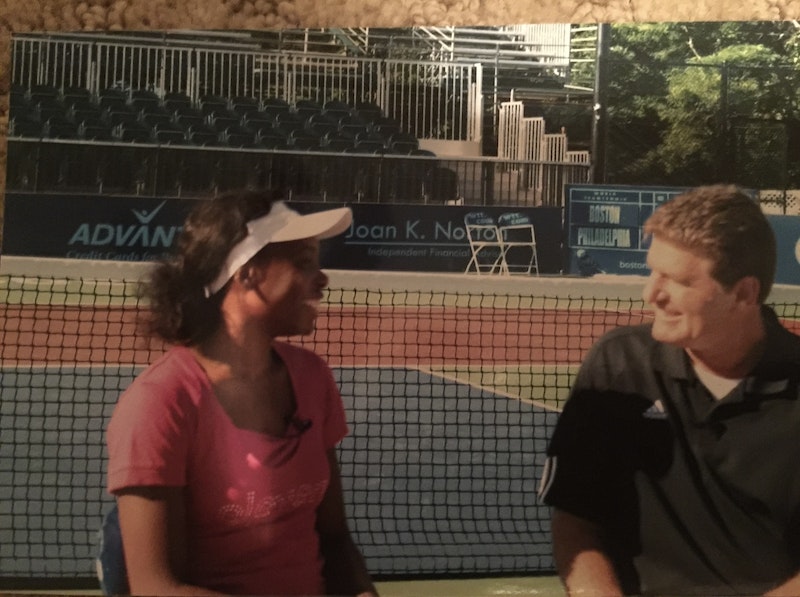 A confidential source has informed me that Doug Adler, the tennis announcer that ESPN blackballed in 2017 after he was falsely accused of making a racist comment about Venus Williams at the Australian Open, recently received a phone call from the CITI Open tennis championship in Washington, D.C., where he'd had an announcing gig for three years until ESPN disgraced itself with a level of cowardice that's craven even by modern corporate standards. It was an official from the tournament saying that they had an opening for an announcer this summer and asking if he'd be interested in the job.

As this was the first legitimate job offer Adler had received in over five years, after calling tennis for ESPN for 12 years, it was hard for him to contain his joy. This would mean he was back in the game. The caller told him that a V.P. for Citigroup (the banking firm that runs the tourney) in D.C. had already greenlighted the rehire, but they just had to run it by corporate in New York City for final approval. The NYC honchos knew that Adler had already successfully sued ESPN for wrongful termination, after which the sports network signed him to a one-year contract, which officially cleared his name. But Citigroup turned him down, saying that the corporation was dedicated to "diversity and inclusion."

The defamatory implication's that Adler’s opposed to diversity and inclusion, which is odd because, at Citigroup's request, he taught tennis, as a volunteer, to inner-city black youngsters for the three years he worked at their tournament. And this is how they pay him back after he helped them burnish their brand to attract minority customers? Friends that were once useful become just another expendable commodity to the current spineless version of corporate America that a handful of online bullies have learned they can cow into submission with a few angry—and usually uninformed—tweets.

Adler's a former all-American college tennis player at USC who joined the ATP pro tennis tour after graduation. He grew up playing tennis on the public courts of Los Angeles, just as the Williams sisters did. There was a time when a solid background like his meant something, but that's a relic of a time when fear wasn't the main driver of societal trends. Online would-be heroes looking for the next takedown are calling the shots, and they couldn't care less about anyone's track record when they have brownie points to gain.

While calling the Venus Williams match, Adler pointed out the aggressive game plan the tennis great would employ when her opponent, Stefanie Voegele, missed her first serve and then had to rely on her vulnerable second serve. "If she misses the first serve," he said, "Venus will be all over her… and you’ll see Venus move in and put the guerrilla effect on, charging." This was an obvious reference  to "guerrilla warfare," which often involves ambushes. Venus ambushed Voegele's weak second serve. But a handful of Twitter halfwits thought they heard him say "gorilla," and they created a tiny stink that scared corporate giant ESPN. Try to imagine a well-seasoned sports announcer with a clean record feeling so compelled to level a racial insult, on live television, at a superstar that he'd risk instant job termination that would label him as a racist, making him an untouchable. The few online freaks who can imagine that absurd scenario are now the ones who dictate who Citigroup is allowed to hire.

New York Post columnist Phil Mushnick wrote an article, saying: "ESPN still hasn’t fixed disgraceful Doug Adler firing over false racism claim." It was about the travesty of justice that Adler's had to endure for over five years now. He included a reminder that Ben Rothenberg, who at the time wrote about tennis for The New York Times, helped stoke the Twitter mob of about 30 ditzes who got Adler fired. Rothenberg threw journalistic ethics out the window in his eagerness to become part of the story. "This is some appalling stuff," he tweeted." "Horrifying that the Williams sisters remain subjected to it still in 2017." The "Williams sisters"? Serena wasn't a part of this story. The reason Rothenberg included her was that he'd recently written a piece for the Times Sunday magazine that had brought charges of racism and sexism against him for his depiction of Serena Williams' muscular body type. The writer suggested that a black woman sacrificed her femininity to further her tennis career. Rothenberg saw an opportunity to redeem himself by sacrificing Adler and appearing to be a champion of the Williams sisters, and he didn’t contact Adler to get his side of the story. He obviously felt people had rushed to judgment in calling him a racist after his Times article, but had no compunctions about doing exactly that to another person in the tennis world if it worked to his advantage.

Mushnick mentions that Rothenberg emailed him, insisting that Adler had said "gorilla," although he obviously had no way of knowing this, and all indicators point to Adler not having said that word. The Times took no disciplinary measures against Rothenberg, and didn’t run a single story over ESPN firing its employee for allegedly making a racist on-air comment. The newspaper didn't want to call attention to its complicity in the behavior of one of its writers.

Rothenberg also told Mushnick, "Only Doug will ever know what he meant to say there." In other words, Adler definitely called Venus a gorilla, but only Adler knows if he called Venus a gorilla in order to intentionally sabotage his life. That makes about as much sense as the former Times writer also telling Mushnick, in reference to the term "guerrilla tennis," "It is not, as you’ve erroneously written, a regularly spoken term in tennis whatsoever. It’s just not." Except that the most famous tennis commercial of the 1990s, starring Pete Sampras and Andre Agassi, was a Nike ad called "Guerrilla Tennis," and except for the fact that Rothenberg's podcast co-host, Courtney Nguyen, had already written about guerrilla tennis for Sports Illustrated. Perhaps Rothenberg's conflicting, inaccurate emails to Mushnick are an example of why the last tennis article he wrote for the Times was in January. His only job now, as far as I can see, is as the editor of Racquet, a publication that bills itself as "a quarterly magazine that celebrates the art, ideas, style and culture that surround tennis." The real reason why Rothenberg's no longer writing for the Times, one of the plum jobs in tennis journalism, isn’t known.

After ESPN settled with Adler to avoid going to trial, the network gave him a sham one-year contract. They had him call a couple of women's college matches and then never called him again. There's one person who could’ve spared Adler from being blackballed, labeled a racist, and needing a quadruple bypass due to a stress-induced heart attack—Venus Williams. When asked about the incident shortly after ESPN fired Adler, the winner of seven major tournaments said, "I pay attention and address situations that are noteworthy." Just like the rest of the tennis world, Venus knew Adler hadn't called her a gorilla, but she wouldn't lift a finger to help him.