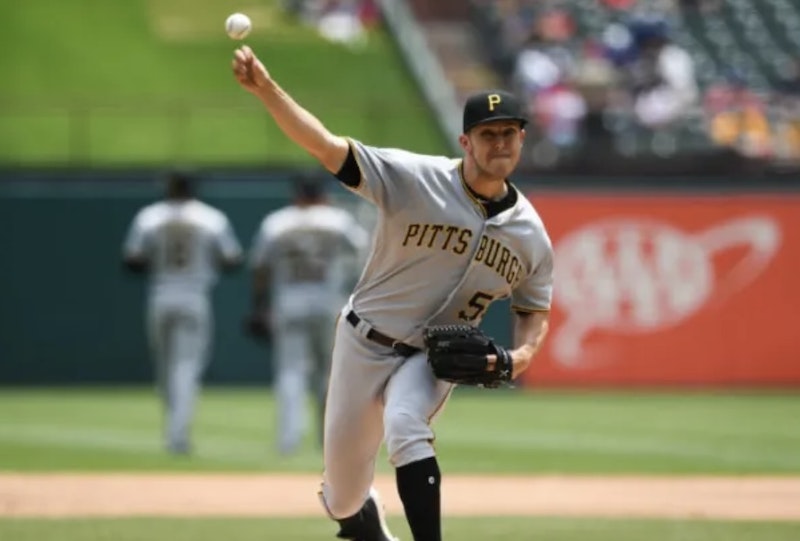 Three times in the past 60 days my Pittsburgh Pirates have made major trades of top-line talent in exchange for bushel baskets of prospects from the likes of the Padres, Nationals and Yankees. We root for the laundry, of course, and the fact that two of these “deals” involved pitchers didn’t get my goat. I was, of course, gutted by the loss of Josh Bell to the Washington on Christmas Eve. I watched his development closely from the minors to the big squad and enjoyed his cricket-like swings in the batter’s box as a lad who craved contact at any cost. But the Joe Musgrove trade to San Diego on Jan. 19, which would’ve been Edgar Allan Poe’s 212th birthday, didn’t bother me much. Nor did Jameson Taillon going to the Yankees on Jan. 24., the same date Mark E. Smith of The Fall perished in 2018.

I suppose Taillon, coming off consecutive Tommy John surgeries, will be Gerrit Cole’s carrybag man next season in the Bronx, as the two came through the Pirates low minors together way back when. Cole always came off as the wine-loving angry California boy, while Taillon is a coffee fanatic, Florida-born to Canadian parents spending his high school years in Texas. He's also a testicular cancer survivor.

Acquaintances send me texts as the Pirates massive rebuild ensues. Again, I say, to hell with the pitchers. My reactions to all of this disorder are few. For the Pirates, it’s all about the MLB Pipeline ratings of the “prospects” that are funneled our way. They’re usually double-digit numbers. Since former Boston general manager (another baseball franchise I hate) Ben Cherington took over, he seems to have a fetish for odd names in his acquisitions. When he left Boston, his name legacy included a Xander, a Mookie and a Brock. In the recent Waco-style inflammation of the Pirates, he has brought in a Roansy, a Maikol, a Canaan, a Hudson, an Endy and a Drake. International signings have brought in a young dude named Shalin Polanco.

So a boatload of Dominican teenagers is supposed to placate a fan-base of already cynical Pittsburghers who know the cheap owner of the Pirates will never match the steady success of the Steelers or the Penguins, who share the same sports-crazed city and the same colors as the Pirates. Unlike Tampa Bay, the Pirates’ comically low payroll is not working wonders despite the Moneyball fetish that’s ravaged the media. Helping and worshipping millionaire owners who cut corners to save money on their baseball investments isn’t exactly fun, I should remind the fantasy baseball geeks and spin-ratio nerds presently suffering from Stockholm syndrome.

Actually acquiring an active Major Leaguer would be quite a thrill for Bucco fans. Mitch Moreland’s name has been floated and thank God we found the switch-hitting utility infielder Wilmer Difo who had been abandoned by the Nationals. I remember adding Lyle Overbay, Marlon Byrd, Justin Morneauand even Wil Cordero back in 2000. A free-agent horn of plenty!

As I’m a fan who enjoyed the Adam Hyzdu and Yamid Haad eras of Pittsburgh baseball, it’s refreshing to welcome these oddly-named prospects. It should be noted that San Diego centerfielder Hudson Head, an alleged star in waiting from the Musgrove deal, actually goes by John Hudson Head and hails from San Antonio, Texas, where he attended Winston Churchill High School, just to mix the Davy Crockett Alamo/Chartwell metaphor.

As for pitcher David Bednar, not to be confused with the famous Mormon official, he’s a local Pittsburgh kid who also came over in the Musgrove deal. The fact he was born during the 1994 MLB lockout makes me nervous. The Canaan Smith outfielderkid who came from the Yankees in the Taillon trade has a middle name of Elijah, which reminds me of the Biblical pool of Bethesda, which was a place of healing waters. Then again, the mass destruction of the Canaanites in Biblical times may have parallels in this catastrophic rebuild of one of the National League’s oldest franchises. Too much Old Testament for someone who might have to navigate the perils of the Northside Notch at PNC Park.

Given the history of Francisco Cordova and Oliver Perez, Mexican hurlers have thrived in Pittsburgh, which has a Mexican War Streets historic district neighborhood not far from PNC Park, with streets named after prominent Mexican-American war figures. So we welcome Omar Cruz, a lefthander from Hermosillo picked up from the Padres in the Musgrove exchange. Most of Cherington’s winter prospect haul hail from the Dominican Republic, with a Venezuelan thrown in for good measure and a guy named Wil Crowe from Kingston, TN. We also got yet another Vanderbilt product in hurler Drake Fellows who’s a Hoosier with a Blues Brothers pedigree from Joiliet Catholic Academy so let us hope he is on a mission from God and didn’t forget the Cheez Whiz.

As for getting Mets catching prospect Endy Rodriguez via the Musgrove transaction, let us hope the ghost of Don Slaught arrives to smooth the presence of a bagel-shaming New York catcher descending on Pittsburgh. Come to think of it, Francisco Cervelli also worked out well for the Bucs arriving from the Bronx awhile back, not to mention Junior Ortiz who made some noise in the mid-1980s, overcoming a stutter much like our 46thPresident.

Cherington supposedly turned Boston around seven years ago and many have questioned his mental health for taking the Pittsburgh job given the presence of Robert Nutting, the cheapskate owner of the Bucs who used to sign my meager paycheck as a reporter at the Wheeling (W.Va) News-Registerback in 1987.

As for Taillon going to the Yankees, it’s interesting to note that when he was the second selection of the first round of the 2010 draft, he was taken ahead of Manny Machado, Matt Harvey, Chris Sale and Christian Yelich. Again with the pitchers. I can count on one hand the number of pitchers I have admired: Steve Blass. John Candelaria. Kent Tekulve. Jim Bibby and Mike Fetters. It’s all about controlled breathing, and for Pirates fans that is especially important right now.