Why Chris Godwin holds the key to Super Bowl LV

Take away Evans, take away AB, who's left? Godwin. 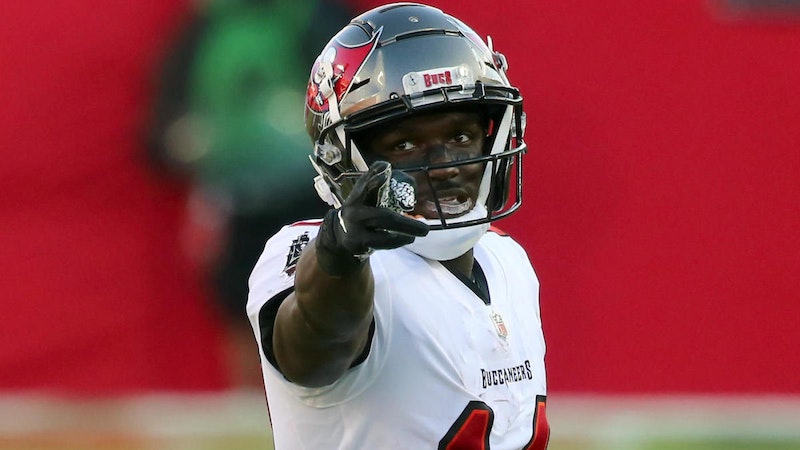 Capacity at Raymond James Stadium in Tampa is 65,618. The NFL is capping attendance at Super Bowl LV at 22,000, so a third of the seats will be occupied. The stadium seating capacity has been expanded above that number, as “the New Sombrero” or “Ray Jay” has hosted the Roman Numeral Game twice before. The League has tried to make a big deal of giving away several thousand game tickets to front-line health care workers. To me, that sounds like reaching the peak of your COVID sickness this coming weekend is a really bad idea.

We know the Kansas City Chiefs will play the Tampa Bay Buccaneers, and that this will be the first time a team will play the Super Bowl on their home field. We know Kansas City will wear red, for the second year in a row, in the big game. What we don’t know is who will win.

I’m offering a prognostication theory you may not see elsewhere. Rod Christopher Godwin, Jr. will be the difference maker in the game. Chris Godwin, Tampa wide receiver, has an opportunity to not only bring the Lombardi trophy to Tampa, but to win the game’s MVP award. Tampa has several other valuable targets for Tom Brady, including his buddy Rob Gronkowski, stellar wide-outs Mike Evans and Antonio Brown, and even loudmouth Scottie Miller. But Godwin seems the one player coming into the game among Brady’s targets who’s healthy, hot, and matches up best against Kansas City’s pass defense.

The Chiefs gave up an average of 236 yards per game through the air this season, landing 14th in the league, truly a mediocre performance. As the N.F.L. turns more and more pass-happy, running backs devalue, and wide-outs get paid. We can’t say that Penn State, where Godwin schooled, is known for a passing offense, but this isn’t college anymore. Brady is your QB, and he’s airing it out. At any time that Brady isn’t calling his own plays, he’s taking cues from head coach Bruce Arians and offensive coordinator Byron Leftwich.

Mike Evans is going to draw some single coverage. So will Antonio Brown. Gronkowski, as a tight end, will get his catches, but likely won’t be integral to Tampa’s scoring success. Gronkowski, in the 2020 playoffs, has two receptions. Godwin has 14 catches for 223 yards.

Against Buffalo, the Chiefs played a suffocating man defense, through three quarters, the Bills star receiver, Stefon Diggs, had four catches for 28 yards. But hear me out: take away Evans, take away AB, what’s left? Godwin.

Kansas City wants to force quarterbacks to throw into coverage, but this just asks for trouble against Brady. Long one of the league’s most accurate passers, Brady’s game is not what it was six, or even three years ago, granted. But the quarterback’s efforts have been more than enough to get Tampa Bay back home. Prior to the NFC Championship, the experts said Brady would succumb to Lambeau wind and cold. Brady was 20-36 for 280 yards, and three TDs. It might as well have been early October.

The Chiefs employed a high safety look against Buffalo. Taking away Diggs’ effectiveness was a fine defense in the AFC Championship, but having to contend with Evans, Brown, Miller and Godwin will be too much. Those second, third and forth options are far superior to Cole Beasley, John Brown, and Dawson Knox. Importantly, Buffalo couldn’t run against the Chiefs, and abandoned the run, early. Tampa’s ability to pound the ground game with Leonard Fournette is another reason the pass game will open up for Brady and Godwin.

The game could come down to Patrick Mahomes being touched by pixie dust, again, and Kansas City won’t go down without a fight. But Godwin gave up his #12 jersey to Brady, with no compensation, tweeting “He’s the GOAT.” I’ve got a couple bucks riding on Brady and Godwin hooking up for some yards, and some points, on Sunday.