A run through each series. 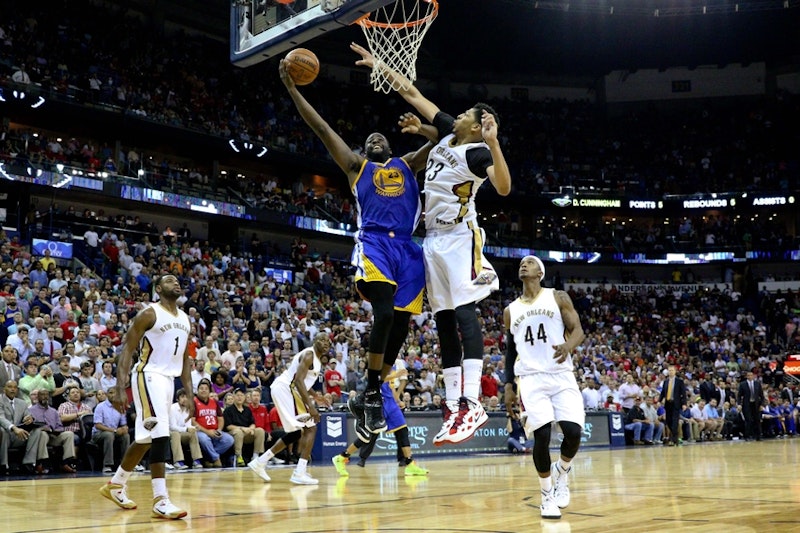 Each Western Conference first round series has officially begun. One game in, one game closer to elimination and advancement.

Steph Curry missed free-throws, three of them. Does this mean he's human, or still the human torch? Curry scored 34 points on 25 shots (only 4 of 13 from deep) and was clearly amped up for Game 1. He was also mauled on a regular basis by the long-limbed Quincy Pondexter, Tyreke Evans (questionable for Game 2 with knee injury), and Jrue Holiday. Playoff basketball means much more physical play. Curry continued to take the ball to the hoop. At one point, he was dripping blood from a cut on his arms. Perhaps the Pelicans' game plan was to grow their fingernails long.

In other news, Anthony Davis is awesome. His fourth quarter was jaw-dropping, and forced Warriors fans to recognize the potential of their opponent. All the talk about "respect" and "appropriate fear" (Kerr's catch-phrase) is probably somewhat genuine, but until The Brow took off, they probably didn't feel threatened. It's good to feel some real threat in the playoffs. That wouldn't have been the case if they were facing the OKC Westbrooks.

It's a shame that Blazers shooting-guard Wesley Mathews tore his Achilles tendon two months ago. Not only is Mathews a clutch three-point shooter, he plays with the kind of limitless energy and physicality that define good playoff perimeter defense. Portland suffered through all kinds of disasters this year, and somehow, still won 51 games. With Mathews out, the Blazers turned to newly-acquired (so much for the bench depth he was going to provide) Arron Afflalo. With a few games remaining in the regular season, Afflalo suffered a strained shoulder. He was forced to miss Game 1, but might return for Game 2. Without Afflalo, Terry Stotts was forced to go further down the bench, bringing in 2nd year guard C.J. McCollum for the start. McCollum went 1 of 8 from the field, but more importantly, that meant less help for the Blazers bench.

Memphis guard Beno Udrih absolutely torched the Blazers. In an eight-minute stretch ending the 1st quarter and opening the 2nd, Udrih was dropping threes and dishing dimes in a flurry. In that stretch, he tallied 11 pts/3 ast/2 reb. The Blazers need Afflalo desperately, if they hope to make this series interesting. A five-point Memphis lead jumped to 18 during that stretch.

Memphis fans concerned about the way the Grizzlies played over the last month or so have reasons for optimism. The luck of the draw. While San Antonio face the Clippers on the road, the Grizzlies get the damaged Blazers at home. Memphis, like Chicago in the East, will need their healthy star point guards (Mike Conley and Derrick Rose, respectively) to go deep into the playoffs. It's always nice to get a huge lift from the bench, though. Udrih finished with as dominant a 24-minute playoff line as I can remember (20 pts, 7 ast, 7 reb on 14 shots).

In a first round match-up that probably should have taken place in the 2nd round (in the future, the NBA seems likely to address the playoff seeding system), the fireworks started early. Aron Baynes and Matt Barnes play rough. Every Spurs player slashing into the paint screeches to a halt when they meet DeAndre "I'm not Bill Russell, but I change the damn game!" Jordan. The first half was filled with Spurs plays that ended in awkward floaters, up-fakes, or blocked shots. Spurs veteran lightning bug Tony Parker often hits these seemingly impossible shots, but asking Kawhi Leonard, and the ancient Manu Ginobili to do the same... well, it's a riskier proposition.

Defensively, Spurs maestro Gregg Popovich game-planned to make Chris Paul a scorer, rather than a distributor, leaving stopper Kawhi on J.J. Redick. With Paul operating at an MVP-level (32 on 20 shots/6 ast/7 reb), the Spurs needed everything to go right offensively. This means Danny Green, Patty Mills and Marco Belinelli hitting from deep. In Game 1, Green struggled, going 2 of 11 overall and 1 of 7 from beyond the arc. In addition, Boris Diaw, one of the main reasons San Antonio overcame the Heat in the Finals last June, went 2 of 12, missing all five of his threes.

The series is a lock to go at least six games. It's a safe bet to say the Spurs won't lose by 15 again in the series. Even if they are ancient, they are still the Spurs. Beware of Hack-a-DeAndre. In one of these games, Popovich will put DeAndre Jordan to the line over 30 times.

Mark Cuban and Daryl Morey dislike each other. In the battle for second-best team in Texas, Dallas and Houston are incestuous. Cuban offered Chandler Parsons a max deal last summer in part to spite Morey. Morey didn't match the restricted free-agent's offer. Victory for Cuban. In an unprecedented move, Pistons GM-Coach Stan Van Gundy cut power forward Josh Smith (former All-Star) because nothing worked offensively with Smith-Drummond-Monroe. Morey swoops in and grabs Smith. Smith has a very good season and Morey barely pays a dime. Victory Morey. James Harden executes the no-long-range-two-pointers offense to perfection, taking the ball to the rim, getting to the line, and finding shooters dotting the three-point line at impossible angles. Dwight Howard goes down for an extended time and Houston keeps winning. The addition of Trevor Ariza fits perfectly for Harden. His defense (a vast improvement over Parsons) helps the Rockets mitigate the loss of Howard. Victory Morey. Cuban, looking to make a splash, trades for Celtics point guard Rajon Rondo. Rondo's lack of a jumper makes things messy for the Mavericks offense. Rondo gets injured. Rondo clashes with coach Rick Carlisle. Loss for Cuban? Too early to tell, as "Playoff Rondo" (Rajon's alter-ego) might still show up. Putting all the blame on Rondo for a Dallas team that had all kinds of flaws despite their early season success (defense and rebounding) is reductive, but things haven't gone the way Cuban imagined so far.

Another Morey victory: In mid-December, the GM traded for 3-and-D wing Corey Brewer, who was languishing in Minnesota. Brewer is a notoriously streaky shooter, who seems to have been reborn in Houston. In Game 1, Brewer finished with 15 points on 3 of 4 from long-range.

Cuban can't wait until they return to Dallas. Maybe Parsons and Rondo will finally find their grooves.