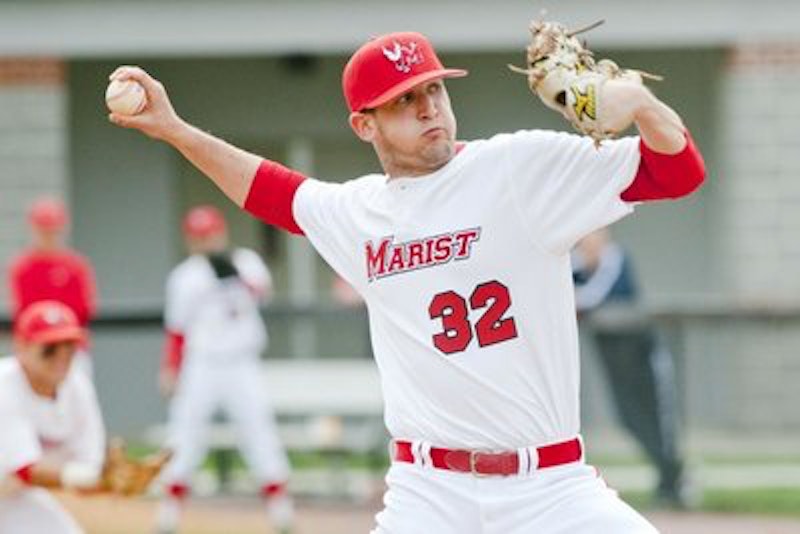 “Are you guys trainers?” a young man behind me asked the two gents reclined on a golf cart. There was urgency, but no panic, in his voice.

I was standing next to the cart at McCann Field in Poughkeepsie, watching Marist College take on Rider in some NCAA Division I baseball action. The kid’s thumb was bent at a horrible angle. He held it up to the overly-groomed trainer guy. “I popped out my thumb,” he said—too calmly—as the Marist trainer in the driver’s seat dismounted his golf cart. The trainer took the kid’s hand in his and within seconds was pulling on the appendage. The ginger lad was participating in a Marist alumni flag football game prior to the Marist spring football exhibition held across the street from the baseball diamond. The football kid made only the slightest inhale as the trainer deftly reset his thumb. A few cringing bystanders looked away. “You might want to get that X-rayed” the trainer told the kid as he headed back to the gridiron. “It’s going to swell up pretty bad.”

The kid mumbled thanks and trotted off with his skeletal readjustment complete. The trainer returned to his golf cart and chuckled with his comrade. There goes his hitch-hiking career, I thought. “He’ll never text again,” someone said from a shady spot near the dugout. And then we returned to watching Marist blow a one-run lead in the top of the seventh inning.

Metro Atlantic conference baseball is a quizzical affair this year. Quinnipiac and Canisius are the usual suspects atop the conference, but when fans look at the overall records, not one team in the MAAC is over .500. Two seasons ago, Marist and Rider battled it out for the top spot and Rider emerged with a one-game margin over the Red Foxes who lost several key seniors after that campaign. It was another fun season of watching the overly-tanned lads from Marist with their Roman noses and Jersey hometowns prance about their minimalist McCann Field with just a hair too much confidence kind of like a Chuck Schumer press conference or Hannibal crossing the Alps with his elephants.

The Marist campus was undergoing a multitasking Saturday with nary a book in sight. The football stadium and baseball field were surrounded with alumni parties, intramural lacrosse types, an indoor cheerleading competition and of course a baseball game. Co-eds struck with Spring Fever and short-shorts were cavorting and contorting with fully-clad football players in Game of Thrones style whorish embraces right there in the jammed parking lot.

The afterthought baseball team had 40 or so stragglers watching as submariner relief pitcher Ryan Thomas out of Ringoes, NJ, faced some flukey antics from the Rider Broncos, including a flubbed infield hit he dropped right in front of the mound as the tying run trotted home from third with two outs. The ball had spin on it and he missed it barehanded and lost his balance backward and fell on his ass. The Rider baserunner scoring from third had reached on a bloop fly that fell behind third to the side of the rushing shortstop and in front of the hesitant left-fielder to open the inning. Thomas, a sophomore, is capturing attention with his painful-to-watch delivery. He crouches down and forward, cocks his shoulder slightly like a gun and then lifts his body and drags his arm under buggywhip style to deliver the off-angle strike zone intruder. He earned co-reliever of the year honors in the MAAC last season.

Thomas would earn the win as Marist would walk-off in their half the seventh with a leadoff double and sharp single to right to earn the split of the doubleheader. Rider’s six-foot-five righthander Josh Stark could hear the team bus idling behind the Marist dugout when he entered the game to face Marist junior Steve Pagano with the wind blowing straight out. The Cranston, R.I., native tripled to deepest center field, and was brought home by Joey Aiola’s sharp single to right field which earned the Suffern, NY kid a mobbing from his victorious teammates in between first and second.

Marist would edge Rider 7-6 in the Sunday lunchtime special and take the series two games to one. Shortly after their celebration, the Red Foxes filled their duties as their own grounds crew. Aiola could be seen dragging the infield by hand while Pagano manned a broom around third base. No frills baseball, even at the Division I level. Among his teammates was Marist centerfielder Graham McIntire, a junior who hails from Concord, NH, and who had a terribly, no good bad game. With Marist down early, McIntire had runners in scoring position and two outs when he waved helplessly at curveballs from Rider starter Kurt Sowa, a six-foot-four senior from Bensalem, PA. Sowa struck him out, and the kid shed his helmet and batting gloves walking solitary up the first base line as a victim now forced to play defense. The third base coach collected his ineffective offensive detritus and a teammate presented his hat and glove for formal centerfield duties. The song “Animal I have Become” by Three Days Grace played over the PA with the line “I can’t escape this hell.” No you cannot, son, with your tousled Mumford & Sons hairdo and headshake. So you left men on base with your team down on the scoreboard. Get ready for more frustration as at least two singles would drop in front of him in the next half-inning.

With Rider ahead 4-2, Tyler Kaiser of Moorestown, NJ, showed off some killer dance moves in front of the Rider dugout. The bench players overflow the undersized containers, and like the rest of McCann Field at Marist, the accommodations are Spartan at best. There is no press box, which is supposedly required for even D-III NCAA programs. Instead, Marist erects a bargain store backyard square-top tent with the college name emblazoned on it for complete overkill on a $29.99 lawn product from TSC. There are shoddy bleachers to the right of the visitors’ dugout, a cheap net backstop and some more half-assed bleachers atop too steep grass berm behind the home dugouts. For a Division I program on the Monopoly board, Marist’s baseball digs are more Oriental Place than Boardwalk or even Kentucky Avenue. Somehow, they get away with it.

After the top of the fifth McIntire ran in from center field and tried to rouse his teammates. “Let’s try one of those comeback things,” he said to his red-capped pals. After a seeing eye grounder to right put Zachary Racusin aboard, McIntire was at the plate again with his obsessively level swing. He hit a towering blast foul to left that he thought was going to be caught by the Rider leftfielder. McIntire unleashed a string of obscenities as he frog-marched himself up the first base line. The ball fell safely into foul territory. With a second life at the plate, McIntire struck out looking against Sowa. His face frozen in disgrace, he marched to the dugout and pounded his batting helmet against the rear wall.

After McIntire’s outburst and another teammate cussing his way back to the dugout, the first base umpire warned the Marist squad about too many f-bombs. “There’s families here guys,” he said, motioning toward the right field line which was still mostly coeds in skimpy get-ups. “That stuff’s gotta stop.” The next few minutes featured classic ballpark confusion as the plate umpire, batter and catcher lost track of a ball-four count loudly corrected by the scoreboard operator in the folding chair behind them. The next at-bat was interrupted by an awkward timeout called by a bullpen catcher pursuing a cardboard home plate that had blown from the sidelines into right field as a pitch was delivered.

Eventually Marist DH Tyler Kirkpatrick of Eagleville, PA, delivered a soaring shot up into the wind in left that landed in a tree. A three-run bomb giving Marist a sudden 5-4 lead. They would of course blow that lead, then win with the walk-off.

With NCAA baseball wrapping up, so does the academic school year. There are rushed conference tournaments that will give way to corny commencements where the student-athletes will be told to wear sunscreen when in fact they should be advised to keep their thumbs in their sockets.