At The Cusp of Spring Training 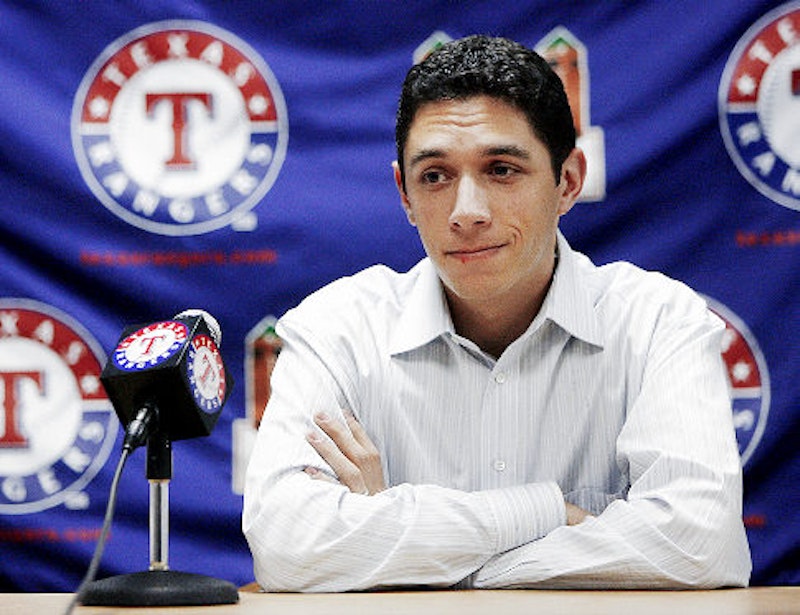 Texas general manager Jon Daniels must think that he’s Toronto’s resident magician Alex Anthopoulos or something, because there is no way the Rangers are getting anything substantial except salary relief for the aging and expensive Michael Young. Young is still a great player—though past his heyday—that’s not what’s in question. The deciding factor in every negotiation so far has been about money. The very versatile and malleable infielder is set to make $16 million for the next three seasons. Young, who’s been moved from one spot on the diamond to another since 2004, isn’t guaranteed one at all in 2011. Obviously, after being considered the face of the franchise for so many years, he’s plenty peeved and recently requested a trade. Making this ugly situation even more complicated, Daniels is demanding a hefty return.

Realistically, the infielder is a bad choice waiting to happen for any ballclub. That is unless, of course, he’s swapped for another regrettable contract. Names like Carlos Lee, Jason Bay, Alfonso Soriano, and Carlos Zambrano have been thrown around. Texas and Colorado were apparently close on a deal in January that would have sent decent prospects to Arlington in exchange for Young and $20 million, but it was nixed for an unknown reason. Most likely, Daniels was unhappy about the money and figured another club would eventually get desperate enough to place a higher bid. Young is still a good hitter and serviceable fielder, but because of the price tag and outrageous return that’s expected, it’d be smart to stay away from him.

At the same time, rumor has it that Francisco Liriano is on the trading block as well. The Twins’ lefty had a bounce back year and performed to the level that many scouts thought he could reach as a prospect. His peripheral stats were astounding, which leads one to believe that his 3.61 ERA was inflated due to bad luck. The Yankees are, naturally, the lead suitors for the southpaw after the brush off by Cliff Lee and the subsequent breakdown of their rotation. Jesus Montero would have to be included in any potential agreement, which is obvious to everyone but the Yankees’ brass. Other teams that could be interested are the Jays, Nationals (who aren’t they interested in?), Rangers, and Orioles.

Speaking of the O’s, ESPN’s Keith Law has a point, why’d they sign Vladimir Guerrero? From a purely baseball standpoint, it doesn’t make much sense. Vlad clogging up the DH spot pushes Luke Scott out to left field, which pushes Noland Reimold and Felix Pie back to the bench. Reimold contended for the ROY in 2009 and Pie still has a lot of untapped talent, and they need playing time if they’re ever going to become productive major leaguers. Solution: trade Nick Markakis. His batting average and home run total both dropped in 2010; in fact, nearly every one of his offensive statistics dipped, but he’s still viewed as one of MLB’s best right fielders. Markakis will start to get expensive soon, and if his numbers continue to fall, so will his trade value. On the open market, who knows what Andy MacPhail could get for the outfielder? Certainly a few pieces to help rebuild his barren pitching staff.