Cool It on the Dodgers Talk

They're off to a strong start but can they keep it up for the rest of the season? 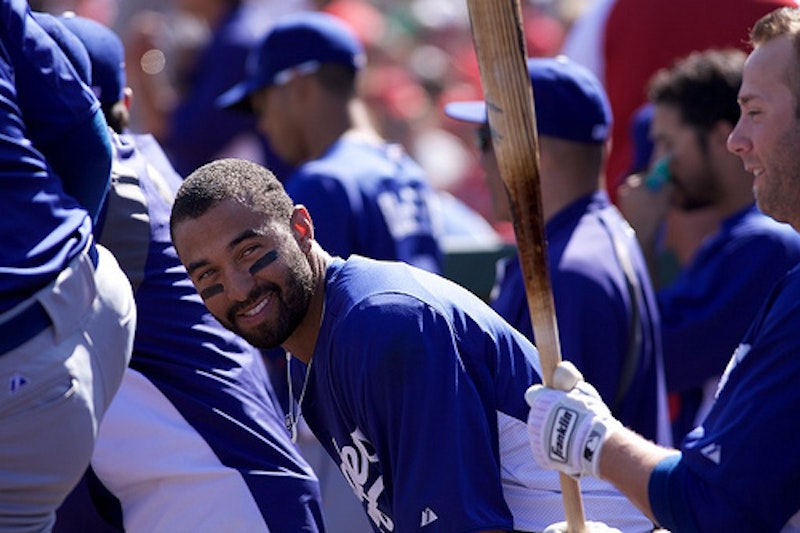 The Los Angeles Dodgers are off to a 9-2 start and currently leading the National League West. Center fielder Matt Kemp, the 2010 NL MVP runner-up, has been a one-man gang through the first week and half of the 2012 season. Clayton Kershaw has picked up right where he left off last fall when he was named the National League’s Cy Young Award winner. The Dodgers clearly have some premium talent but even Kemp and Kershaw may not be enough to keep them afloat in the tightly contested NL West.

I wasn’t a big fan of Dodgers GM Ned Colletti’s offseason acquisitions. In fairness to Colletti he was working at a disadvantage with the team’s sale up in the air and the divorce proceedings of then-owner Frank McCourt mucking up the works. Of course it didn’t help when McCourt went out and invested millions of guaranteed dollars in the likes of Jerry Hairston, Mark Ellis and Adam Kennedy. The signing of those three middling infielders came just one year after Colletti gave Juan Uribe $21 million for three years. After posting a horrendous .557 OPS for the 2010 Dodgers Uribe has improved to .590 through his first nine games this season.

Colletti also responded to the loss of Hiroki Kuroda by signing Chris Capuano and Aaron Harang. At this point in their careers Capuano and Harang are back of the rotation innings eaters. The Dodgers will need former top prospect Chad Billingsley to step forward to fill the void left by Kuroda’s departure. Through two starts Billingsley looks up to the task.

Billingsley broke into the Major Leagues as a 21-year-old in 2006. He looked like a future ace when he went 16-10 with a 3.14 ERA and 201 strikeouts in 2008, but took a step back in 2009 as his strikeout rate dipped and his walks per nine innings climbed. In 2011 Billingsley’s strikeout rate dipped to 7.3 per nine innings, the lowest since his rookie season of 2006. Billingsley’s other peripherals declined across the board last season. At just 26, he seemed to be at a crossroads. He’s responded nicely in 2012 with 17 strikeouts, one walk, and just 13 hits allowed in his first 20.1 innings of work, pitching to a 1.33 ERA. While it’s unrealistic to think Billingsley can maintain his current performance levels the Dodgers will need him to become a reliable compliment to Kershaw if they have any chance of holding off the Diamondbacks and the Giants for the division crown.

With Albert Pujols in the American League and Milwaukee’s Ryan Braun on his best behavior, Matt Kemp looks like the best player in the National League. Through the Dodgers first 11 games Kemp smashed six home runs and drove in 16. He’s been backed up in the lineup by right fielder Andre Ethier, but the rest of the offense is very pedestrian. The team has depth but lacks production at catcher and every infield position. Rookie shortstop Dee Gordon has received a lot of fanfare for his speed and base running but he’s hitting just .200 with a .523 OPS in 2012. Last season Gordon stole 24 bases in 56 games but posted just a .325 on base percentage. The jury is still out on Gordon as a long-term solution at shortstop. If the Dodgers really hope to contend they’ll need first baseman James Loney to provide some protection for Ethier in the lineup. Loney was at one time a top prospect but his production has fallen consistently over the past several seasons: he posted a career high OPS of .919 in 2007 as a 23-year-old. Now 27, Loney has stalled and failed to post an OPS over .772 in the last four seasons.

The Dodgers have been a great story thus far, but Kershaw and Kemp can’t do it all by themselves. Los Angeles won 82 games last season and Colletti did little to improve the roster over the off-season. If the Dodgers hope to ride a hot start to contention they’ll need consistent production from former hot shots Billingsley and Loney.