The Relentless Search For Fantasy Pitching

What to know and who to draft. 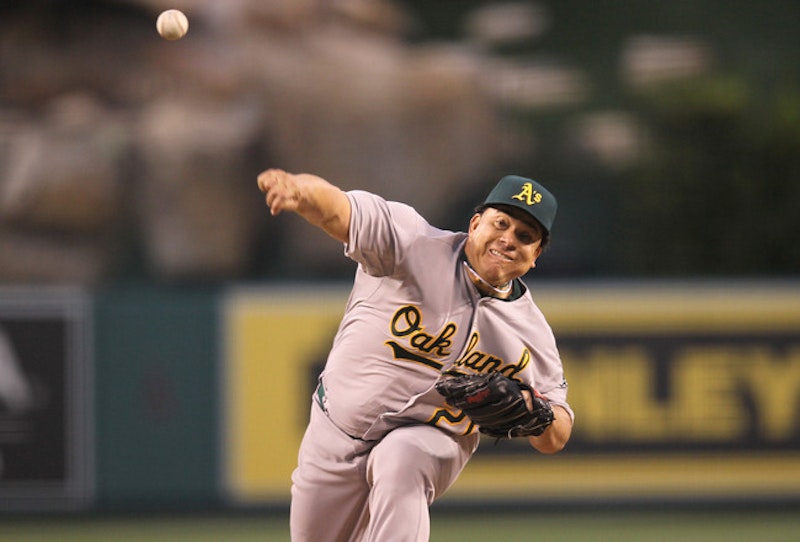 I won’t bore you with the minutiae of my fantasy baseball team but my philosophy has always been to draft offense early and then attempt to cobble together a suitable pitching staff. Offensive players are just more predictable from year to year. After the Top 10 pitchers or so go off the board in the draft or auction I typically focus on filling out my lineup. My strategy has worked more often than not, though last season was a dismal failure. Once the season starts I keep a keen eye on the performance of pitchers on the waiver wire as I look for the right mix. Here are some pitchers who are probably available in your league that may help out your staff.

Bartolo Colon signed with the Oakland Athletics over the winter. Now 38, and comically rotund, the hurler had a nice comeback season with the 2011 Yankees. Colon got off to a fast start last season and has continued the trend early in 2012. Colon improved his record to 3-1 with eight shutout innings against Albert Pujols and the Angels on Thursday night. Colon brings a couple of things to the table as a fantasy starter; he faces the Mariners a lot, he plays in a pitchers park, and he has excellent control so he won’t hurt your WHIP. If Colon is available in your league he’s worth riding until he fades, as he did down the stretch for the Yankees last season.

I typically like to focus on National League pitchers in my fantasy leagues because they don’t have to worry about the DH or regularly face offensive juggernauts like Texas, Detroit, Boston and the Yankees. A couple of National League starters have caught my attention. Lance Lynn of the St. Louis Cardinals pitched in relief last season. He was thrust into a starting role when Cardinals ace Chris Carpenter went down with an injury in Spring Training. Lynn has been fantastic in his new role. The 25-year-old has struck out 13 and walked just three in 12 innings over his first two starts. The sample size is very small but Lynn did strike out 40 batters to just 11 walks in 35.2 innings for the Cards last season. He’s a young strikeout pitcher with good control on a very good team. Lynn may be shifted back to the bullpen if Carpenter returns but if he’s available in your league you should snatch him up.

I wrote about the Dodgers hot start earlier this week. A major factor in the Dodgers’ early season success has been the improvement of Chad Billingsley. He went undrafted in many leagues to start the season but has been one of the most popular waiver wire pickups according to CBSsports.com. If no one in your league has jumped on Billingsley’s bandwagon you should get him while you can.

I typically avoid young American League pitchers in fantasy leagues. I may break my own self-imposed ban to pick up Kyle Drabek or Danny Duffy. Toronto’s Drabek, the son of former Cy Young winner Doug Drabek, was the center =piece of the deal that sent Roy Halladay to the Phillies. The younger Drabek was knocked around pretty good with the Blue Jays last season. He finished his rookie year with more walks than strikeouts and 6.06 ERA and 1.80 WHIP in 78.2 innings. Through two starts this year the 24-year-old hurler has struck out 10 compared to just four walks in 12.2 innings. Again, the sample size is incredibly small but the early indicators are that Drabek may be figuring it out.

Kansas City’s Danny Duffy is another youngster to watch. Duffy, 23, was a highly regarded prospect who got his feet wet with the Royals in 2011. In 20 starts as a rookie Duffy posted a 5.64 ERA and a 1.61 WHIP. The lefty struck out 15 and walked five in this first two 2012 starts. Duffy and Drabek are worthy of some spot starts for your fantasy squad and should be stashed on your bench in keeper leagues.