Where will the three-time MVP end up? 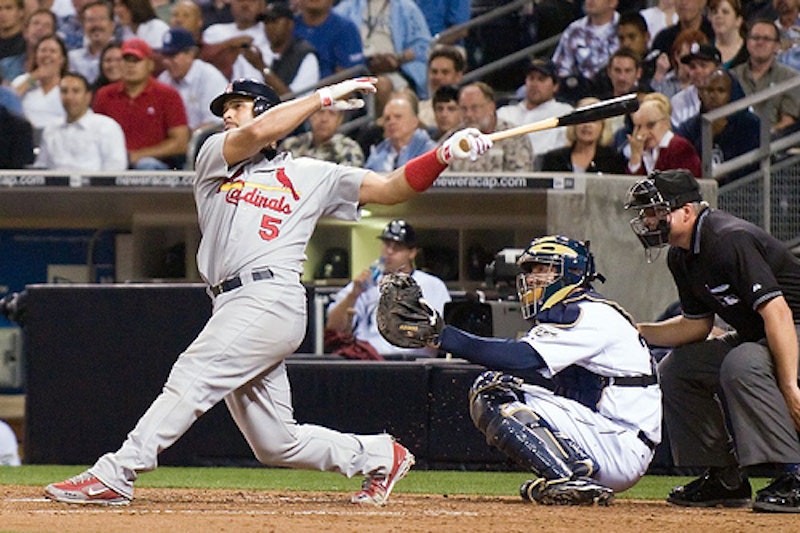 Everyone knows that MLB superstar Albert Pujols has a contract that will expire at the end of this season. Despite very public private negotiations between Pujols’ representative and the Cardinals front office, the sides have not reached an agreement on a new deal. Accordingly, Pujols has said that he will not open negotiations with the Cardinals until after the 2011 season. Of course, Pujols will be a free agent 15 days after the 2011 World Series. At that point he’ll be able to negotiate a contract with any team of his choosing.  So why would Pujols not test the market at that point? Answer: he will.

That doesn’t mean he won’t return to St. Louis, but lets assume that Pujols has a typical year and reaches free agency. Where will he end up? I looked at every team in baseball to try to narrow down an answer.

First let’s eliminate some possibilities. Rumors have Pujols asking for a 10-year, $300 million contract. Many clubs won’t be able to afford him, even if he gets less. We can eliminate a third of the franchises right off the bat. The Houston Astros, Florida Marlins, Pittsburgh Pirates, San Diego Padres, Milwaukee Brewers, Arizona Diamondbacks, Tampa Bay Rays, Cleveland Indians, Kansas City Royals, and Oakland A’s do not have the cash to play at this table.

We can also eliminate the Detroit Tigers, Minnesota Twins, Philadelphia Phillies, and Cincinnati Reds as they all have All-Star caliber first baseman signed long term (Miguel Cabrera, Justin Morneau, Ryan Howard, and Joey Votto, respectively). We can drop the Atlanta Braves as well as they rarely spend on big free agents and have highly touted rookie first baseman Freddie Freeman set to start the season with the big club.

Let’s drop the New York Mets and Los Angeles Dodgers from the list of perspective suitors due to each team’s severe marriage and/or financial troubles.

That leaves 13 teams, including the Cardinals.

The Orioles have money. Nobody remembers, but they had the largest payroll in baseball just 13 years ago. They’re not going to out-spend the Yankees, but with local TV revenue from MASN they could likely double their $84 million payroll going forward. So they could afford Pujols, but why would he want to play in Baltimore? They’d have to pay him much more than any other team, and with so many others in the bidding that seems very unlikely. Chance to sign Pujols: 1%

The Mariners offense was the worst in baseball last season, finishing 74 runs behind the Pirates, whose pitcher is required to bat in their lineup. The M’s badly need to help their offensive offense. The Mariners can probably add the money to their payroll that Pujols would cost, but again, why would Pujols want to sign his last big contract with a last place team? Chance to sign Pujols: 1%

When a player of Pujols’ caliber becomes available you can’t discount the big money teams. The Red Sox are on this list because they have the money to sign Pujols and the winning reputation to lure him to Boston. However, the Red Sox just raided their farm system to acquire All-Star first baseman Adrian Gonzalez, and are said to have the parameters of a seven- or eight-year contract extension in place. The chances of Pujols playing for Boston are about the same as Gonzalez’s deal falling apart. Chance to sign Pujols: 2%

The White Sox are always a wild card. Nobody knows what GM Kenny Williams will do, probably not even Williams. The White Sox may not have the payroll to spend $30 million annually on Pujols though, and they just signed Paul Konerko and Adam Dunn to three- and four-year contracts, respectively, to play first base and DH. Chance to sign Pujols: 2%

The Nationals tried to sign Mark Teixeria to a $200 million deal. They tried to sign Cliff Lee to a huge $150+ million deal. They were rumored to be involved with Carl Crawford and they did, to everyone’s surprise, land Jayson Werth with a giant $126 million, seven-year contract. In short, the Nationals have been trying to throw their money around for a while, and signing Pujols would be the ultimate big splash. You’ll hear their name involved, but unlike Werth, Pujols will get his money whether it’s from a bottom dweller or not. Chance to sign Pujols: 2%

The Rangers have some young talent at first base, but nothing along the lines of Pujols. They also have money to spend, and are coming off a World Series appearance.  They have a medium sized payroll, but they could potentially splurge on Pujols. It’s not a bad fit. Chance to sign Pujols: 4%

The Angels are a perfect suitor for Pujols. They are a big market team who lost out to all the big free agents last off-season who could try to turn their fortunes around with one big swing of the free agent bat. I’d like their chances much more if GM Tony Reagins hadn’t messed up the free agent signings of Carl Crawford, Jayson Werth, Adrian Beltre, and Cliff Lee this past off season, as well as overcompensating by trading for Vernon Wells and his massive contract. Chance to sign Pujols: 4%

Coming off a World Series win, the Giants have amazing young pitching, and a general manager who has a fetish for older players. This sounds like a good match. It would be a much better match if GM Brian Sabean hadn’t committed $71 million to Barry Zito, Aaron Rowland and Aubrey Huff after this season. Chance to sign Pujols: 5%

As a middle-of-the-road team with young and improving stars like Carlos Gonzalez and Troy Tulowitzki, the Rockies are exactly the kind of club Pujols could make the most impact on. Both those players are on long term expensive contracts (Gonzalez is signed through 2017, Tulowitzki through 2021) so it’s doubtful the Rockies would want to spend the money. Still, it’s an intriguing idea. Can you imagine the kind of numbers Pujols could put up in Colorado?  It makes me pee a little just thinking about it. Chance to sign Pujols: 5%

Does anyone realize how huge the Toronto media market is? It’s a Top 10 market in North America, and the company that owns the Blue Jays, Rogers Communications, has pledged to raise the team’s currently minuscule payroll. What’s more, with the big money contracts to Vernon Wells and Alex Rios off the books, the Blue Jays have almost no money committed to long-term deals. The Jays are a sleeping giant. Chance to sign Pujols: 8%

Yes, the Yankees already have a first baseman. Yes, he’s in the third of an eight-year, $180 million deal. Yes, they have the highest payroll in the game by a huge margin again, and they have untold millions committed in the coming years in long term deals to aging players. Yes, they may not have the DH available either as 35-year-old Alex Rodriguez’s 75-year-old hip may force him off third base sooner rather than later. And none of that really matters. The Yankees revenue is so massive they could sign Pujols to a 10-year, $300 million deal, kick Teixeira to the curb (paying a good chunk of his salary in the process), and not think twice. Also, name the last time the best player in baseball became available and the Yankees weren’t interested.  Chance to sign Pujols: 10%

After this season Kosuke Fukudome, Aramis Ramirez and the roughly $30 million they make per year combined come off the books. The following season is the last for Ryan Dempster and Carlos Zambrano’s $33 million yearly expense. The Cubs have no young first baseman in their minor league system of any note at any level. They have money, they love big names, after this season they will have first base open, and Pujols could personally stick it to the Cardinals 18 times a year. Outside of St. Louis, this is Pujols’ most logical landing spot. Chance to sign Pujols: 20%

Judging from the above, there will be a market for Pujols. When the best hitter in baseball becomes available, teams are going to try sign him. But Pujols has always been a Cardinal and by all accounts he’s a loyal guy. He won’t give the Cardinals a hometown discount once he hits free agency, but my guess is he will give them the opportunity to meet his best offer. Chance to sign Pujols: 36%.