Can The Phillies Win Without Chase Utley? 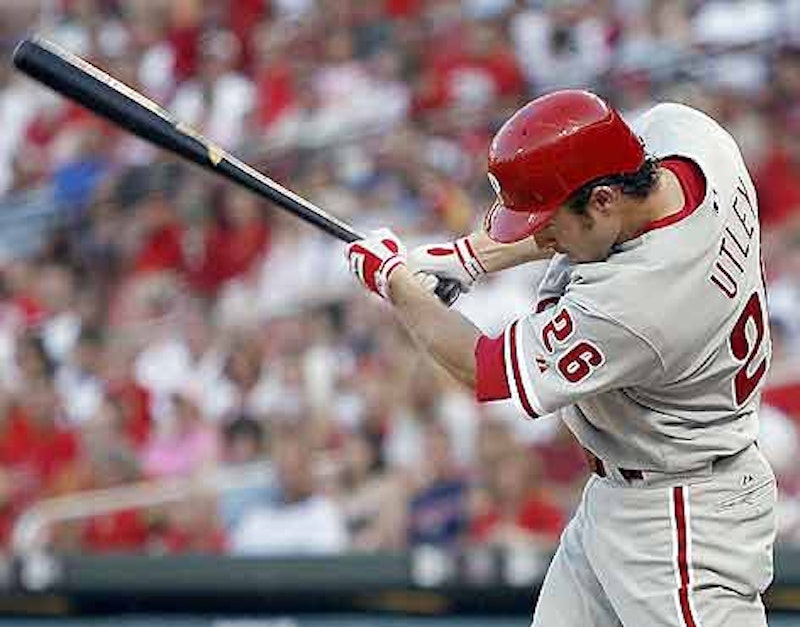 On a team with four ace starting pitchers, including two Cy Young-winners, and two former MVPs, it may sound strange to say the second baseman is the most important player. But it’s true and losing Chase Utley could deep-six the Philadelphia Phillies’ 2011 season. Utley has a serious knee problem and could be sidelined for the majority of the season.

Utley, who has no major awards to his name, has been the team’s most important player since his first full season in 2005. During that time, Utley has played stellar defense at an important up-the-middle position, while hitting .293/.380/.514. Those numbers mean he hits, gets on base, and hits for power better than any second baseman peer, indeed better than most players at any position. If Utley’s knee injury requires surgery and/or he is forced to miss most or all of the season, the Phillies are going to have to play someone at second base that will, in all likelihood, contribute about a 10th of the production a healthy Utley.

Even for a star-studded team like the Phillies, losing Utley is the worst possible scenario. Let’s compare Utley to the two former MVPs on the Phillies, first baseman Ryan Howard and shortstop Jimmy Rollins, using the Fan Graphs stat WAR (Wins Above Replacement). It’s a cumulative stat (like RBIs or homers, not like batting average) that takes a player’s offense and defense into account and helps us understand their on-field contribution in a single number (a full description can be found here). One thing you should know about WAR is that it’s position-adjusted. This accounts for the fact that it is much easier to find a first baseman who can hit like Howard than it is a second baseman that can hit like Utley.

Despite starting his career at age 21, three full seasons before Utley, Rollins has accumulated 36.7 WAR to Utley’s 44.3. In other words, Utley has amassed 121 percent of the Rollins career value in 67 percent of the games.

Howard started his professional career at the same age as Utley (24), but due to playing a less demanding position has been only half as valuable as the second baseman although his offensive stats are better than Utley’s. Also, his defense can’t hold a candle to Utley’s. Overall, Utley has five seasons that have been more valuable than any single season the former MVPs Rollins and Howard have ever had. That’s difficult to replace.

Would Utley, if healthy, have another great season? Yes. Looking at the projections for the three Phillies, losing Utley’s production is roughly equivalent to losing the production of both Howard and Rollins. So Utley is very good, but this isn’t the NBA and Utley isn’t a starting quarterback in the NFL. Can one guy really be the lynchpin of the Phils? Again, I say yes. The only way the tables could turn is if the Phillies had an all-star second baseman waiting in the wings. They do not. They don’t have future all-stars available to plug in at first either, but in the event of a long term Howard injury, the Phillies would be able to pick up a first baseman who could replace about 50 percent of his value.

As for Utley being more valuable than Roy Halladay or Cliff Lee, imagine if Halladay were to miss a start in the playoffs. The Phillies could plug in Cliff Lee, the pitcher who over the past two seasons has led his teams to two consecutive World Series appearances.  If something happened to Lee, the Phillies would still have Halladay. In the unlikely event they both went down, the Phillies could put Cole Hamels or Roy Oswalt at the top of their rotation, two pitchers who would be number one starters on many teams. The Yankees won the 2009 World Series with a rotation that consisted of only two good starting pitchers. It can be done.

Losing Utley is a daunting scenario for the Phillies. It will test the team’s depth on the bench and in their minor league system as well as the front office’s ability to make fixes on the fly. But, baring a blockbuster trade, if Utley is out for significant time, there might not be much the Phillies can do. The hole he leaves behind is too great.