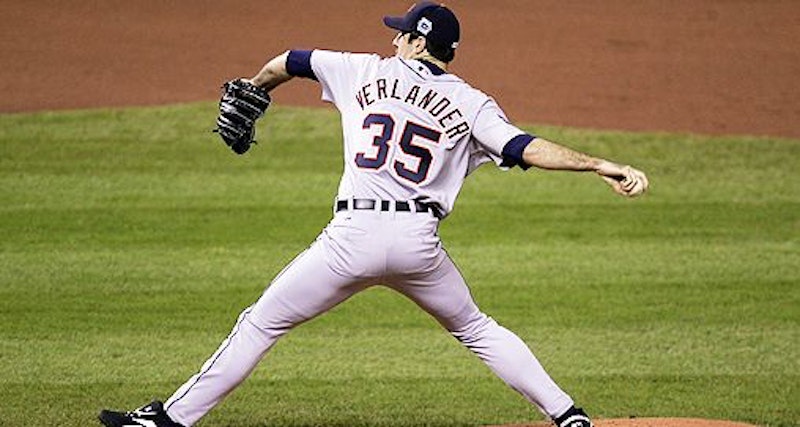 Offense gets most of the attention in fantasy baseball for a handful of reasons. For one, they’re in the lineup every day and therefore seem to accumulate more statistics. The truth is that most leagues operate with 12 categories, split down the middle between the pitchers and hitters. I’d still argue hitters should be given priority on draft day, because there are fewer breakout stars on offense (every year more than a few pitchers come out of nowhere), less of an injury risk and more consistency from year to year. Still, you can’t win in real life or in fantasy without a balanced team, and I’d argue that great pitchers are more consistent on a weekly basis—and when the fantasy playoffs rolls around nothings more valuable than a set of aces.

Stars: Case in point: Justin Verlander was the most valuable player in fantasy baseball, and he’ll probably be first starting pitcher voted MVP since Roger Clemens in 1986. Jered Weaver actually only trails him by one quality start (28-27), and was the clear-cut number two in the AL. Following those two were a pair of pitchers who struggled last season, James Shields and Josh Beckett, but whose pedigrees doesn’t make their success too surprising. Other legitimate aces include Felix Hernandez, Dan Haren, CC Sabathia and David Price, all of whom should continue to perform at a high level going forwards.

Disappointments: Ubaldo Jimenez looked like his second-half self this year, rather than the dominant hurler we saw for the first half of last season. The talent is still there, and he’s an intriguing buy low candidate, but not one that inspires a whole lot of confidence. Francisco Liriano also offers tantalizing potential, but his 2011 failed to deliver on any of it. Similarly Max Scherzer and Brett Anderson were popular pre-season picks, but didn’t post the numbers analysts expected. I like them more next year, as well as Brandon Morrow (the K’s were there this year, but nothing else), but all lack elite control to compliment their electric stuff.

Surprises: For someone that’s owned Josh Beckett the last couple years, but who refused to go anywhere near him this year, 2011 was a surprise—though I doubt too many Red Sox fans were shocked to see him return to form when fully healthy. CJ Wilson and Ricky Romero looked good in 2010, but their 2011 seasons proved neither was a fluke. Doug Fister put together a remarkable season without a lot of hype, and rookie Michael Pineda delivered on his promise, recalling rotation-mate Felix Hernandez’s debut. Jeremy Hellickson was another over-achieving youngster, as was Alexi Ogando (though he faded down the stretch).

Looking Forward: A few young pitchers emerge every year, as do former stars coming off of injuries, but for every rookie that lives up to they hype or pitcher who turns back the clock there are two more whose nagging issues linger or who struggle to tap into their potential. It’s important to have at least one outright ace—a proven workhorse of the Verlander, Weaver, Sabathia caliber, another upper tier starter and a couple lottery tickets who you won’t feel bad dropping for next summer’s hot call up.

Stars: Clayton Kershaw nearly matches Verlander’s numbers, though he hasn’t gotten quite as much recognition or MVP consideration. He’s young, but will be an All-Star for years and is the one young pitcher I’d recommend building a fantasy staff around. Roy Halladay, Cliff Lee and Cole Hamels lived up to preseason claims that the Phillies might be fielding the greatest rotation ever, outpacing the similarly rich Giants trio of Tim Lincecum, Matt Cain and Madison Bumgarner, though not by a wide margin. Milwaukee even had a trio of aces, with Shaun Marcum excelling in the National League, Zack Greinke pitching well coming off an injury and Yovani Gallardo looking like he could become the best of the bunch. Elsewhere, Tim Hudson and Johnny Cueto posted stellar lines, and boy I bet the Yankees sure wish they could have Ian Kennedy back.

Disappointments: Two of last years phenoms struggled in 2011, Tommy Hanson because he couldn’t stay on the mound, and Mat Latos (likely) because he threw too many innings in 2010. Both would be smart value picks next spring. The fourth of the Phillies star starters didn’t exactly pitch like one, but Roy Oswalt doesn’t appear totally done yet. Chris Carpenter wasn’t terrible either, but not the ace he’d been the last few years, and Chad Billingsley regressed quite a bit. The normally steady Ryan Dempster and Ted Lilly had off years, and Edison Volquez and Brett Myers were outright disasters.

Surprises: Daniel Hudson looks like a star for years to come, and no one saw Ryan Vogelsong coming, and even as a Phillies fan, I was just waiting for the wheels to fall off Vance Worley. There weren’t a ton of unexpected breakouts, but Cory Luebke was a waiver-wire steal, as was Brandon Beachy, who came into the season less hyped than fellow Braves prospect Mike Minor, but vastly outperformed him.

Looking Forward: Hiroki Kuroda is the prototype guy you look towards for consistency, and remains a good value. I like the Phillies pitchers to remain elite, though the aforementioned Kershaw ought to be the first NL pitcher selected in fantasy drafts. I think Jordan Zimmerman will continue to improve and both Josh Johnson and Adam Wainwright could immediately reclaim Top Ten pitcher status if fully recovered. Javier Vazquez was stellar down the stretch, but… ugh. I’d rather have Anibal Sanchez.

Stars: Never invest heavily in relief pitchers! It’s important to grab a few closers, but predicting which ones will fare well from year to year is a fool’s bet. Mariano Rivera should be trusted until he retires, but who thought Craig Kimbrel and Drew Storen would outrank him by season’s end? JJ Putz, John Axford and Jonathan Papelbon have the kind of power pitching repertoire that should allow them to continue to rack up saves—I think K/9 is a good indicator of whether a closer has been truly dominant, or just lucky.

Disappointments: Carlos Marmol, Brian Wilson and Neftali Feliz weren’t exactly bad this year, but none justified their draft status. Joakim Soria may have been the most disappointing, further proving how difficult it is to project saves. Jonathan Broxton was another premier closer whose injury struggles made him nearly worthless, and anyone expecting a return to form from Joe Nathan was stung.

Looking Forward: Taking strikeout rate into consideration, Jordan Walden looks like a good, cheap closer option next year. Fernando Salas also looked good, as did Sergio Santos. Really though, the best strategy is to wait on closers, stock up in the later rounds and retain the flexibility to drop players you haven’t invested much in for the inevitable middle reliever who gets a promotion. It happens every year, without fail.

And that does it! Good luck to those of you who are still in contention and for the rest of us, there’s always next year.