How could things have gone so wrong? 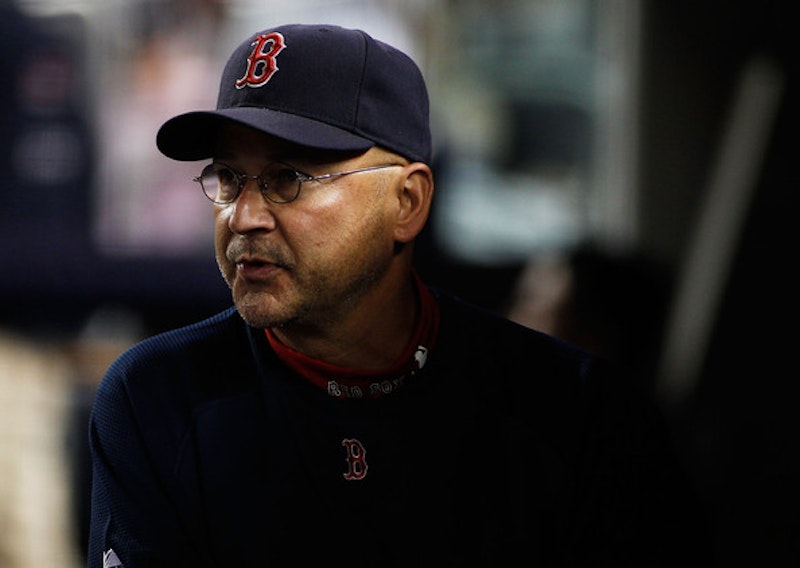 Terry Francona is the manager of the Boston Red Sox, the team that lost another game last night, completing a job they began at the beginning of the month. As in, blowing the biggest lead of any potential playoff team in modern baseball history. The job isn’t yet complete of course. Two games remain in Boston’s season both of which the Red Sox face the last-place Orioles while their Wild Card competition, the Rays, face the New York Yankees. Except the Yankees are already the AL East champs and have nothing to gain by putting their aging roster at risk in meaningless games. So they’ve been running their spring training B squad out for the last few games. And those “sad-sack” Orioles? Yeah, they’ve beaten the Red Sox four out of the last five meetings. Things look bleak for Boston.

And they should. The Red Sox have combined bad hitting, bad pitching and a bit of bad luck all into a potent mix, like adding two inert powders in high school science lab. Add water and it blows up. The Red Sox have added tequila. Actual baseball information follows: Sox starters have the worst ERA in baseball over the last month. Their two aces, Jon Lester and Josh Beckett, sport a cumulative ERA over eight during that period. The team’s offense looks fine overall, but their line has been propped up by five games. In those five games the Red Sox have scored 72 runs. In the other 20 games they’ve scored 64.

A team that performs half that badly, especially at the expense of a playoff spot, is likely to fire their manager. But the Red Sox don’t generally operate like that. They are not a reactionary organization. They respond to situations methodically and analytically, avoiding making decisions in the heat of the moment. And still, this is an unprecedented collapse we’re in the process of witnessing. This was a team vying for the best record in baseball, leading their division (which is the toughest in baseball), and out of nowhere they turned into the Cleveland Spiders (look them up).

When fans talk about firing the manager they are really talking about where to place blame for failure on the field. But locating the culprit can be an impossible task. Take Monday night. Starter Josh Beckett was seemingly tiring. The fifth inning went single, walk, single (scoring a run), sac bunt out, walk. The bases were loaded and the score was tied 2-2. There was one out. The team’s bullpen was depleted by the 14-inning marathon game the night before and by the previous month’s worth of lousy starters who couldn’t make it out of the fourth inning. What do you do? Francona left Beckett in. The next batter popped up and the one after that struck out. Inning over.

Two innings later a similar situation arose. The inning went single, line drive out, strike out, walk. There were two outs and the score was still 2-2. Again, Francona chose to leave him in. This time it didn’t work. The next hitter doubled, and the following batter hit an inside-the-park homer off the center fielder’s glove. Who is at fault? Is it the player? Is it the manager? Is it both? Is it the pitching coach? Is it the General Manager?

But Terry Francona won’t lose his job over a failed pitching change. Difficult as they might be, in-game tactics don’t comprise the bulk of his job description. Like all managers, Francona must keep the clubhouse together, not too tight, but not too loose either. He has to communicate effectively with players and the media. Over his eight years in Boston Francona has excelled at all of these things.

Ultimately, a manager is judged on one thing: he must win games on the field. Francona has two World Series rings and is 8-0 in World Series games. His teams have made the playoffs every season he’s been at the helm save two (this would be the third). Which brings us back to this year.

How much of this Red Sox disintegration is really Francona’s fault? Maybe he should he have pulled Josh Beckett, but there are defensible reasons for not doing so. What could he reasonably have done to improve the Red Sox pitching over the last month? What could he reasonably have done to get David Ortiz to hit in the clutch? Was there a way he could have squeezed more production from his catchers? Could he have prevented Kevin Youkilis’ injury? How about Clay Buchholz’s? There is some middle ground where the manager can make some difference, but despite his position at the top of the hierarchy of a ballclub, his ability to affect the team on the field is probably marginal.

Most fans aren’t interested in subtleties though. They want the guilty party tarred and feathered. But the Red Sox don’t look at it that way. If this season is lost, they will look at what went wrong, dissect and try to learn from it. Then they’ll decide who the best guy is to manage the 2012 Boston Red Sox. I’m betting they decide on Terry Francona.