The ACC finally does it in. 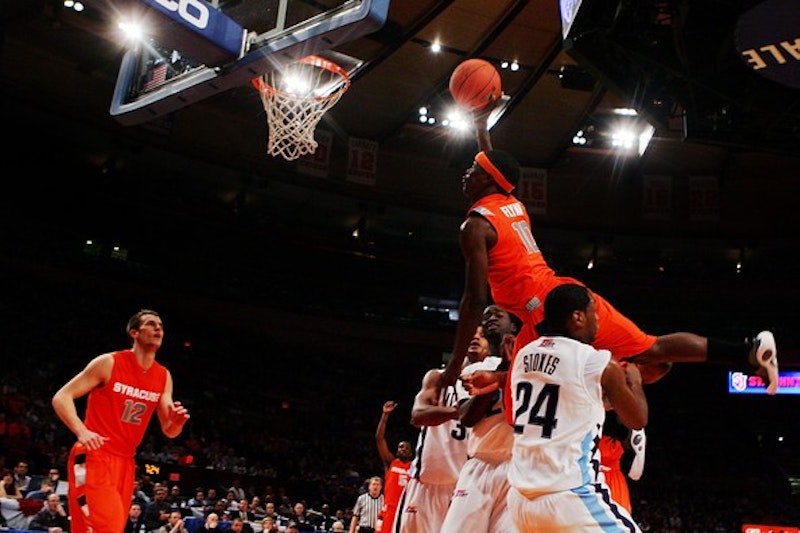 I was at home on Saturday when the news that Pitt and Syracuse had applied for admission to the Atlantic Coast Conference scrolled along the bottom of my television screen. I was preoccupied helping my son set up his new Lightning McQueen racetrack and intermittently chasing my daughter away from my iPad so the impact initially failed to register. My first reaction was focused entirely on college football. I thought about the SEC landing Texas A&M and Oklahoma and Texas being wooed by the Pac-10 and wondered why the ACC would even bother with Pitt and Syracuse. Does Syracuse even play football anymore? I haven't seen them on national TV since Donovan McNabb declared for the draft. I figured they went to intramural only.

Then it hit me: the Big East is dead. The Big East has arguably been the country's preeminent college basketball conference for decades. The Big East tournament is always an epic affair with buzzer beaters, upsets and overtimes that whet the appetite for March Madness. Star coaches like John Thompson, Jim Calhoun and Jim Boeheim have become household names due in part to ESPN's Big Monday and the endless list of talented players they recruited over the years. Much of the conferences' notoriety comes from the fact that Madison Square Garden has played a major role in its history.

When the ACC added Syracuse and Pitt it essentially killed Big East basketball. There is speculation that UConn and Rutgers will soon join the ACC as well, forming the East Coast version of a super-conference. Sure, there will still be 12 teams left in the Big East. They will certainly continue to play basketball but none of them have the cachet of the big boys. Notre Dame and Marquette are usually pretty good and West Virginia can make things interesting but losing Syracuse, Pitt and Connecticut would be the equivalent of the ACC losing North Carolina, Duke and Maryland. One thing I know for sure is that Villanova's schedule just got a lot easier.

While the Pac-10 and SEC are engaged in a college football arms race the ACC is concentrating on basketball. None of the four schools mentioned to be joining the conference are going to leave Florida State or Virginia Tech trembling on the gridiron. Syracuse, Pitt and UConn are all Top 25 basketball programs. Rutgers is presumably along for the ride due to its proximity to New York City. With the ACC adding the New York television market and three top programs to the basketball schedule it's only a matter of time before conference games start popping up in The Garden; just imagine a Duke-Syracuse and Maryland-UConn in conference doubleheader. Where do I get my tickets?

As a college basketball fan the news is bittersweet. I don't like to see the demise of a basketball institution like the Big East. The games, coaches and players have been legendary. However, I'd rather see them defect to the ACC together in order to make that the strongest basketball conference than to be broken up entirely. Too bad Villanova won't be coming along as well but the football program just isn't up to the level of the other ACC schools, making the suggestion moot. The ACC changes also mean that Maryland's schedule just got tougher. Mark Turgeon seems to have the Terps’ recruiting efforts on the right track but he just went from having the third best program in the conference to fifth or sixth.