Clayton Kershaw Is the MLB's Best Bang For Your Buck

But he's got some competition. 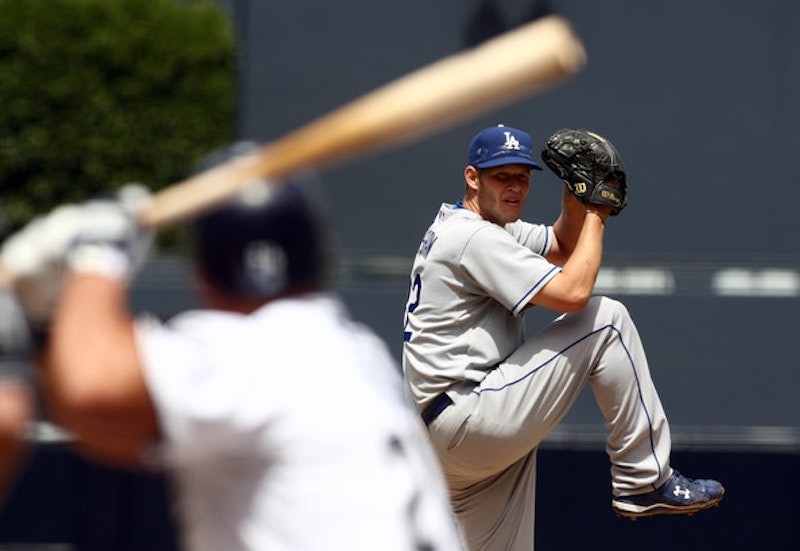 The debate over the American League and National League MVPs will reach a fever pitch this week. Baseball writers struggle to define "valuable" because it encompasses more than just WAR or OPS or the now defunct Game Winning RBI. Rather than attempt to decipher baseball's MVPs I've taken a look at baseball's best values. There is a difference.

MLB's best value is Dodgers' Ace Clayton Kershaw, the National League's frontrunner for the Cy Young award. At just 23 Kershaw is wrapping up his fourth, and by far his best, Major League season. Despite pitching much of the season in the shadow of Philly's four aces Kershaw leads the NL in wins, ERA and strikeouts. He's also allowed just 170 hits in 226 innings leading to an absurd WHIP of 0.987. Kershaw has put up these impressive numbers for a dysfunctional Dodger franchise at the bargain basement cost of $500,000. He currently ranks fourth in all of baseball in WAR with a score of 7.4. Boston's Jacoby Ellsbury is the only other player in the WAR Top Ten who will earn less than $6.9 million for the 2011 season. Kershaw figures to be a great value for years as he is not eligible for free agency until after the 2015 season.

Detroit Tigers Catcher Alex Avila is among the best values in the American League. Justin Verlander and Miguel Cabrera will receive well-earned MVP votes but Avila's emergence has been crucial to Detroit's run to the top of the AL Central. Detroit spent over $50 million last offseason to sign Catcher/DH Victor Martinez. Given Avila's lackluster performance in 2010, when he posted just a .656 OPS in 333 plate appearances, the conventional wisdom was that Martinez would be the Tigers' everyday catcher. Avila's performance at the plate and behind it has relegated Martinez to the DH role. Through 9/22 Avila has accumulated a .905 OPS, supplanted Joe Mauer as the AL's best hitting catcher and posted a 5.5 WAR all for just $425,000. The Motor City backstop is arguably baseball's most improved player.

After battling injuries and expectations for years the Royals' Alex Gordon has finally posted a season to match his potential. In 2008 Alex Gordon was a 24-year-old hot shot   in his second big league season. While Gordon's .783 OPS wasn't making anyone forget George Brett he appeared to be on the right track. The wheels came off the cart in 2009 when injuries and ineffectiveness landed Gordon a trip back to Omaha. He returned to the Royals in late 2010 as a weak-hitting outfielder. Gordon put everything together in 2011. He currently ranks tenth in the AL with a WAR of 6.0 to go along with 23 homers, 87 RBI and an .879 OPS. Still just 27, Gordon looks like a cornerstone for the perpetually rebuilding Royals. He made $1.4 million in 2011.

Giants' Third Baseman Pablo Sandoval had an impressive rookie season in 2009. He clubbed 25 HRs, drove in 90 and posted a .943 OPS. The man affectionately known as "Kung Fu Panda" hit more like Jack Black in 2010 as his OPS dropped to .732 and he led the NL in grounded into double plays. Sandoval came back from San Francisco's 2011 victory lap noticeably slimmer and clearly more dedicated. With a week left in the season Sandoval has 23 bombs, an OPS of .913 and a 6.1 WAR. At the price of $500,000 Sandoval is second to only Kershaw in terms of bang for your buck.