Astros Brace For 115 Losses This Season

Just sticking to what they do best. 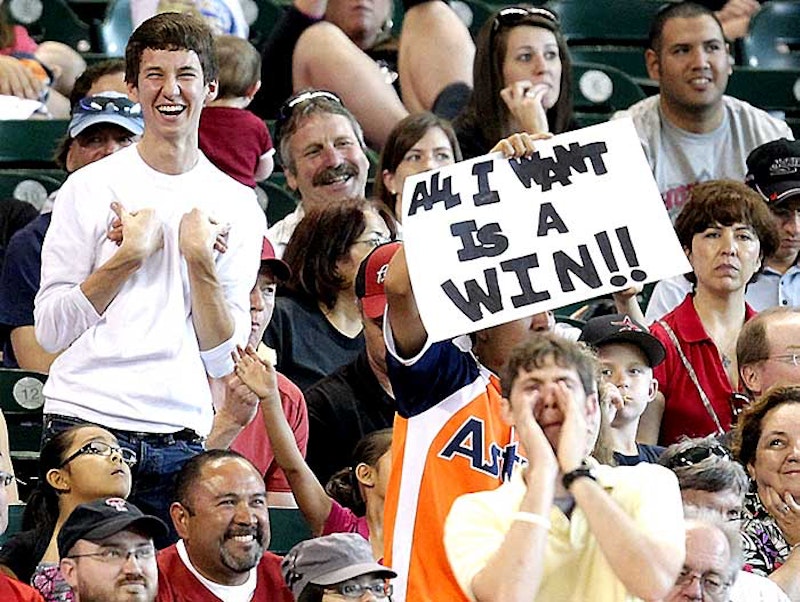 The Astros are bad. I don’t even mean in comparison with the other 29 major league clubs. In fact, if they could face the last place 2011 version of the club, they would lose. By a lot. If you think justifying 106 losses to a fan base is hard, try 115, or 120, or even a record breaking 125. Houston has nothing going for them, except maybe a potential rebound season from Carlos Lee, who will likely be traded mid-season anyway. That’s it.

The forthcoming move to the AL won’t help. GM Jeff Luhnow is looking at three first overall draft picks in a row, so at least there’s a silver lining. The veteran executive played a huge part in the Cardinals’ farm system from 2003-2011. He is well-trained in the art of drafting. As of right now, though, he’s got basically nothing to work with. Jonathan Singleton, Jarrod Cosart, and George Springer are far away from the big leagues, but early promotions would be moot. At this point, it’s hard to believe that the ‘Stros would put up a fight against mediocre AAA teams.

Jordan Lyles and Bud Norris show promise, but neither is going to post stellar, or even above average, statistics in 2012. If Wandy Rodriguez is able to buck his trend of starting the season dreadfully slowly, then Luhnow will waste no time in dealing the lefty. Brett Myers has been given the closer role for the sole purpose of eventually trading him. As a starting pitcher, the veteran has proved he is no longer effective. As a reliever, though, with a lighter workload and less opportunities to screw up, Myers could string together enough impressive innings to attract a few buyers. The only problem is that they aren’t going to get much for their used-up vets; Lee, Rodriguez, and Myers are all overpriced, aging, and, as of now, relatively useless.

But how could they be worse than last year? Well, imagine that without Clint Barmes, Jason Bourgeois, and half seasons from Hunter Pence and Michael Bourn. Take into account the players that are likely to be traded this year, and you have a team that couldn’t beat the 2003 Tigers.

For the next two years, though, the front office will likely be hoping for a large loss total. The fewer amount of wins in 2012 and 2013 lead to higher draft picks. As the Nationals have proven, having the first overall choice in consecutive years is very helpful. Stephen Strasburg and Bryce Harper are going to lead Washington into contention. Imagine what Luhnow could do with three of those, not to mention all the other picks the team will receive.

For now, it’s still terrible to be an Astros fan. It will be for quite awhile. Once 2015 rolls around, however, they might be on top of the AL West.