Oakland's A's Try to Catch the Texas Rangers in the A.L. West 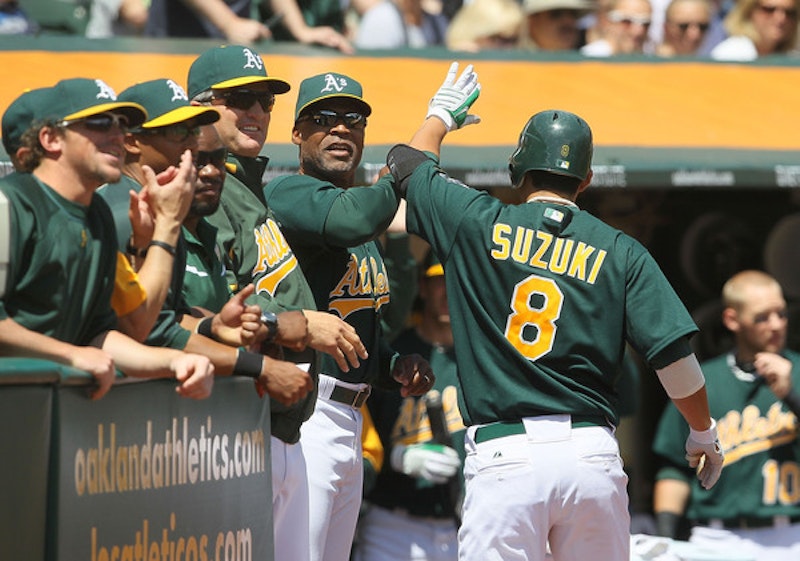 The Boston Red Sox obviously had the most successful offseason, but the Oakland Athletics—always strapped for cash—also impressively fortified their roster. General manager Billy Beane made deals like a madman and not even the best sportswriters can predict what he’ll do next. The $19.1 million posting fee Oakland offered for the negotiating rights with Hisashi Iwakuma was unprecedented and out of character. The even stranger part is that they didn’t sign him. Iwakuma’s outrageous salary demands were the likely downfall in the contract talks, but you’d think the two sides would’ve had preliminary discussions before Oakland decided to bid or not.

Two A’s acquisitions completed this offseason could potentially impact the 2011 season. Or they could have no impact at all and be quickly forgotten about. David Dejesus and Josh Willingham were nabbed by Beane to man the two corners in the outfield. A Willingham, Coco Crisp, Dejesus outfield is well above average—in the National League. In the A.L. it’s still fairly decent. Dejesus is coming off of a career year that he may not be able to replicate. Crisp is a constant injury risk, but when healthy he can be a sparkplug in the lineup. Willingham is also injury prone, and to make matters worse he’s never seen action in the better league. If this team wasn’t the A’s, with its pitching friendly stadium, I wouldn’t be as skeptical. Kevin Kouzmanoff made the same switch as Willingham last year, except he was already acclimated to a drastic pitcher’s park because he played in San Diego. The 2010 season did not go well for Kouz, as he went from a solid third-basemen to a non-tender candidate.

While the A’s are doing everything they can to improve, it appears the Rangers don’t even want to win anymore. After losing out on Cliff Lee they quickly turned to plan B: Brandon Webb. Since they lost out on one Cy Young winner, they simply turned around and signed another. Seems logical, right? But when you factor in that Webb hasn’t pitched in the Majors for two years and that his current fastball is at 82 MPH, he looks like a lame consolation prize. Of course, Rangers GM Jon Daniels did get him on the cheap ($3 million in guaranteed money) and even with all the injuries considered, he’s not a bad risk. That said, Texas will either have to fill a rotation spot with a decent starter or sign a strong bat to make up for the runs allowed.

There are two solutions: One, sign Adrian Beltre to play third, effectively moving Michael Young over to first base. Beltre’s bat will flourish in Texas’ pinball machine of a stadium (the exact opposite of Oakland’s) and his defense is a huge plus for Texas’ groundball pitchers. The other option is to move Rookie of the Year closer Neftali Feliz to the rotation. Because of his great success in the bullpen many analysts are against the move, but considering that Feliz pitched most of his minor league games as a starter and that C.J. Wilson made the transition very easily last season, it’s not such a risky move. Worst-case scenario is that Feliz’s mechanics will be messed up for awhile if they end up moving him back to the bullpen.

Pitching wins in the playoffs, but during the regular season, offense conquers. It’s easier to build a contending ballclub in a hitter’s park rather than a pitcher friendly one. The Red Sox, Yankees, Phillies, Reds, and Rangers scored the most runs in 2010 but also had respectable team ERA’s. The Athletics, meanwhile, led MLB in most major pitching categories but scored only 663 runs.