How the sports network is fumbling in its determination to be #1 in everything. 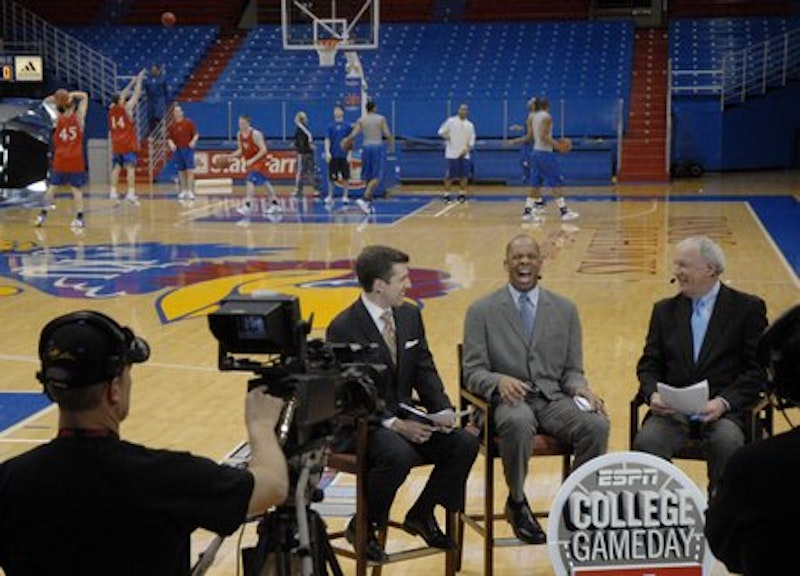 Welcome to 2011, when you can still call a female colleague “sweetcakes” but not always get away with it.

At least, not if you’re 68-year-old Ron Franklin, the longtime ESPN announcer who did just that to sideline reporter Jeannine Edwards on Jan. 1. According to sportsbybrooks.com, Franklin and Edwards were part of a pre-game discussion before last Friday’s Chick-fil-A Bowl, along with ESPN announcers Ed Cunningham and Rod Gilmore.

During the meeting, the subject of Gilmore’s wife Marie being elected Alameda (CA) mayor came up. As Gilmore, Cunningham and Franklin discussed the subject, Edwards tried to join the conversation. When she did, Franklin said to her, “Why don’t you leave this to the boys, sweetcakes.” Edwards responded to Franklin by saying, “don’t call me sweetcakes, I don’t like being talked to like that.” Franklin then said, “okay then, a–hole.” After the meeting Edwards reported Franklin’s comments to ESPN management.
ESPN wasn’t able to find anyone to replace Franklin for the Chick-Fil-A Bowl—after all, there were only three other announcers on hand—but it did yank Franklin from calling Saturday’s Fiesta Bowl broadcast. Whether or not he’s been suspended remains unclear; he’s apparently still scheduled to call a couple of college basketball games this week, though he did release a statement that read, “I said some things I shouldn't have and am sorry. I deserved to be taken off the Fiesta Bowl.”

That male sportscasters covering games being played by male athletes—and who are 68 years old—can make blithely sexist remarks isn’t exactly news. (Especially, it seems, when it comes to Franklin, who called another female sideline reporter “sweetheart” back in 2005.) And we can all probably attest to the general vapidity on display by most sideline reporters, male or female, who despite the inherent difficulties of their jobs rarely ask anything more penetrating than, “What’s the strategy from this point, coach?”

Still, you’ve got to marvel at Franklin’s tone-deafness. How many sports articles have you seen that note how, in today’s Twitter/Facebook/camera-phone universe, athletes (and, by extension, all of us) need to be more vigilant about what we say and do? Even Franklin’s surely aware of this point having been made over the past couple of years.

Sweetcakes-gate comes just a few days after ESPNews anchor Will Selva was caught plagiarizing, word for word, an Orange County Register column about the Lakers. Selva, suspended indefinitely, issued an apology in which he said he’d cut and pasted the Register story into his script but “forgot” to rewrite it before going on-air.

This kind of activity comes less than a year after ESPN officially embarked upon the Wal-Mart-ization of sports news, culling writers from existing local papers to create “local” sports feeds like ESPN Chicago, ESPN New York, and so on. It’s restricted so far to big markets, but one doesn’t need to strain to envision a time when it will be working to supplant small-town papers as well, in its never-ending quest to expand and control as many outlets for sports news as possible.

It’s called “branding,” and in many cases—like this one—it sucks. In attempting to monopolize the landscape, ESPN has been moving too fast, without providing enough ground troops or enough deadline time to do the job right. I don’t think Selva was being malicious when he lifted the Register story; he was feeling pressed for time and working way too fast.

Franklin has been with ESPN since 1987, but the network’s inability to find someone to replace him at Chick-fil-A—or simply relying on Cunningham, Gilmore and Edwards to muddle through somehow—is again indicative of an operation that’s moving too quickly on the ground to allow the presumably cooler heads above to react appropriately.

The sports world will never suffer from a lack of blowhards; there’ll always be a fair number of Neanderthals on hand as well (see Favre, Brett). But if ESPN really wants to be all things to all viewers and listeners, it had better start paying better attention to how it goes about its business.