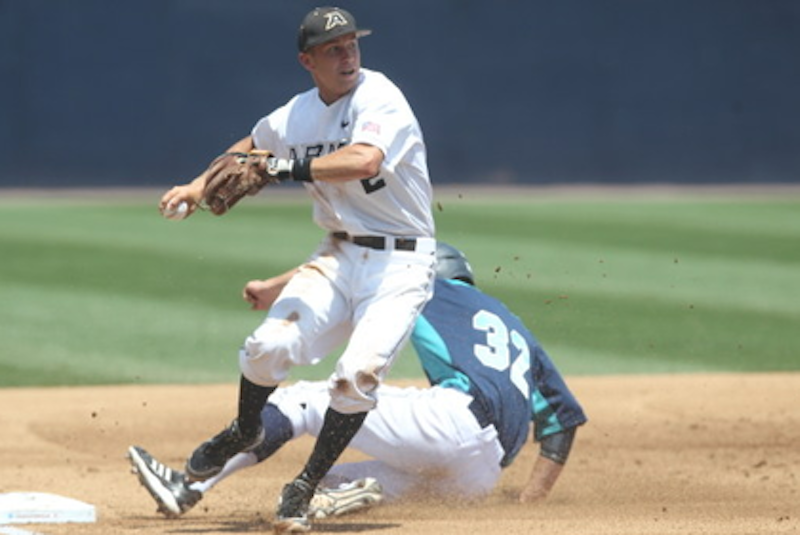 Sometimes a more dramatic setting is required for baseball, especially when your MLB team is mired in the sickly waiting-room light of Milwaukee’s Miller Park for a lost weekend. So if there’s a kid with a classic West Point name like Brock Davidson pitching for the U.S. Military Academy’s Army Black Knights, it’s time to saddle up and go see the sophomore cadet from Houston toe the slab.

Brock and his fresh-faced, go-getter teammates resemble the cast from Starship Troopers, and the deadly bugs they were fighting this past weekend were an opposing dugout full of Bucknell University Bison. This was a battle for first place in the Patriot League, with the Lehigh Mountain Hawks waiting in the wings for their chance at the top spot, sitting pretty with an easier remaining schedule than the games ahead for the Black Knights or Bucknell. Just before the trip to West Point, I saw this quote about sports from General Douglas MacArthur: “Upon fields of friendly strife are sown the seeds that upon other fields, on other days, will bear the fruits of victory.”

In the case of the pair of weekend doubleheaders played between Army and Bucknell, the “other fields” were called Splitsville. Each team won two and lost two. The stalemate left Bucknell (9-3) with a slim edge over Army (7-4) and Lehigh (7-4) in the Patriot League standings. The Sunday games were played with the sounds of the 31st Annual West Point Military Tattoo floating through the wind coming from the Trophy Point outdoor amphitheater. Two guys in kilts taking a break were trying to toss a football across the narrow road leading to Johnson Stadium at Doubleday Field. A weak-armed Scotsman almost plunked the roof of my VW with a wobbler as I drove by.

By the time I settled into the concrete bunker stands, Bucknell was clearly in charge of the nightcap. Army drubbed them 10-4 in the first game, and in the early innings of game two Bison lefthander Xavier Hammond was staked to a five-run lead. He was throwing more nasty strikes than his mound opponent Davidson, whose ineffective grunts could be heard in the third row of the compact ballfield nestled between The Plain, Cullum Hall beyond left, Bartlett Hall in center and the new Jefferson Hall library in right. The graphics on the stadium walls are that cool black and gold stencil font; there was a superfan grandma type decked out in Army baseball gear, one breastfeeding matron and at least two people with dogs.

Yes, Doubleday Field is named after Abner Doubleday, who made some noise as a West Pointer when he wasn’t riffing on the English game of Rounders around 1840 or so. Despite the historic and somewhat formal setting of the campus, baseball’s informalities prevailed as the press box played walk-up music for Army batters. So fans do in fact hear Billy Ray Cyrus cranked out of the PA and bouncing off the windows of the nearby West Point Club as the Black Knights shortstop strides to the plate with a Japanese-made aluminum bat in hand. Cadet Daniel Cortes has some weighty salsa music playing for his appearance, which ended in a gnarly check-swing strikeout, one of six Ks for Hammond on the afternoon. Cortes had three RBIs in the first game and is part of a hard-working corps that makes Army a fun team to watch. When they draw a base on balls, they break into a dead sprint to the first base bag—a sprint that makes a youthful Pete Rose seem slow on the take.

As Sunday’s twinbill looked to mirror the Saturday split, most of the 45 or so in attendance were simply sunbathing and enjoying the bagpipers. But just as the late afternoon comfort level was about to reach maximum capacity, the sound of a bugle broke through the Doubleday Field bliss. It was the Retreat Ceremony. Everyone on the West Point campus is required to stop what they are doing and face the main flagpole off The Plain. Hats are removed from heads. The flag is lowered briskly and with great care, and then a giant cannon is fired in the direction of the Hudson River. Players on both teams came to a halt, even as Army reliever Patrick Gardiner was in mid-pitch in the bullpen.

The break for the Retreat seemed to rattle the concentration of Army hurler Julian Larimer who plunked Bucknell catcher Jon Mayer with his very next pitch. The collection of Sunday fans out near the right field bullpen was a motley bunch of transient visitors, a stray cadet wearing a cheap Casio wristwatch and a couple of divorcees smoking Capri cigarettes. They were discussing the Big Papi spoof performed on Saturday Night Live the night before. The right field bullpen fence is a good angle to watch the action. It was the area that received a massive bleacher extension when the Yankees visited West Point in March of last year for to revive an old tradition of playing a spring exhibition against Army.

This seedy little corner of the ballpark carried little magic, however, as the Army relievers immediately threw gas on the Bucknell fire minutes after taking the hill.

The dramatic landscape was definitely delivered with Bear Mountain and Storm King Mountain and all the bluffs and cliffs surrounding West Point providing a breathtaking backdrop. The architecture does inspire awe from many angles, the empty football stadium is a beautiful maximization of space and the loopy roads yield many surprising sights for civilians. My recon was weak, and my mapless search for Doubleday Field taught me firsthand that there is a U.S. Mint entrance for Department of Defense Employees Only, a Taco Bell, a bowling alley with a restaurant called Skeeter’s BBQ and that new relic structure known as a U.S. Post Office all within the West Point confines.

There was a moment during the ballgame where the Cadet Honor Code prevailed. Army leftfielder Mark McCants unleashed his own cannon of a throw to catcher Ben Smith for a close play at the plate. The Bucknell runner looked out to me, but there was no argument—not a peep—from the Black Knights players or coaches. The call was accepted, the game moved on. While MLB’s instant replay fiascos implode in stadiums across the map, West Point maintained its own quiet calm as the dust settled over home plate at Doubleday Field. With the shadows lengthening and the twilight near, they soldier on, even down nine runs in the second game of a doubleheader.