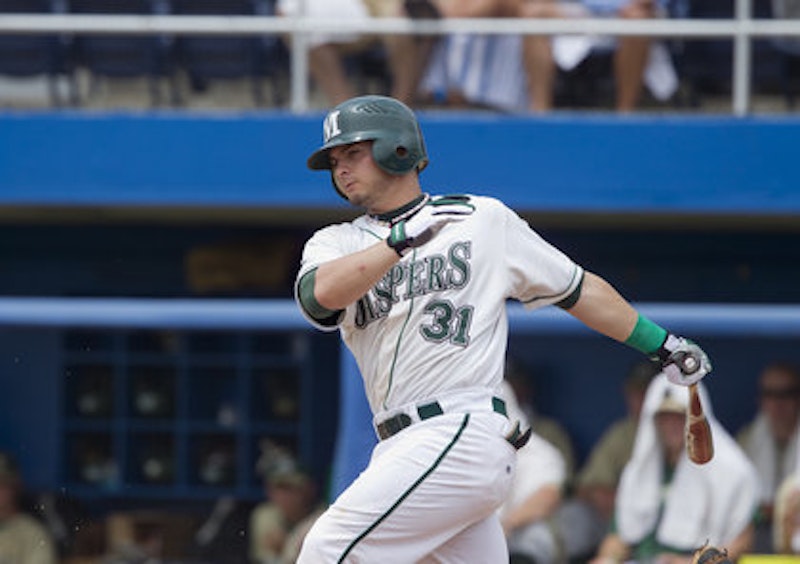 The way I figure it, since the McCann Baseball Field at Marist College in Poughkeepsie sits nestled along NY state route 9—which begins as Broadway in Manhattan—its city address would be Broadway and 1235th Street. Way uptown.

The Manhattan College Jaspers headed north this past weekend for MAAC baseball action against the Marist Red Foxes. Both squads are mired in the lower half of the conference standings, and even though the top six of the 11 teams in the MAAC qualify for the playoffs, these two teams have reason to be nervous about any postseason play.

The pre-Easter three game set did not go well for the Jaspers, who toil within Van Cortlandt Park in the Bronx for their home games. They brought their “last stop on the 1 train” angst up to Dutchess County, where locals pooh-pooh invading city dwellers who tend to be weekenders from Wall Street with multiple addresses or slumming hipsters following the Oprah-like commands of Lena Dunham. Nothing is more entertaining than a Sunday New York Times feature about the “trend” of city hipsters moving upstate. The landed gentry and redneck intelligentsia of villages like Red Hook, Pine Plains and Rhinebeck set their own blood boiling each fortnight when the paper runs its usual travelogue of obscure connoisseurship leading the bearded hordes of rooftop kale growers and tall banana bike riders northward. The threat of fun-employed hordes of curatorial trust funders heading upstate transforms local tractor dealers turn into Vincent Price in Witchfinder General and soon enough barricades are manned near the Culinary Institute of America in Hyde Park and a chain is stretched across the Hudson River near Staatsburgh.

But the Jaspers did not bring bespoke, twee and artisanal butter churns with them on their trip north. They simply brought a bevy of bungling lefty hurlers and an undersized shortstop. Marist prevailed 6-0 over Manhattan on Thursday, sat around idle on Good Friday, and swept the Saturday twinbill 11-6 and 8-7 with lots of errors to go around in the sunshine of McCann Field. That’s where Manhattan pitcher Nick Girardi, whose father Joseph was in the stands (he is “Dr. Skull” in the Jersey-based Chiller Theater horror/sci-fi expo outfit), undid himself with two hit batsmen and three walks in the third inning of game one of Saturday’s doubleheader. Girardi squandered the 2-0 Jasper lead and the nightmare inning saw Marist put up an eight-spot as the hits came in droves after Girardi loaded the bases. “I’ve never seen him this wild,” his dad said, under his NRA trucker cap.

The school, known more for its basketball program, has the usual ethnic names on the roster with the typical parochial powerhouse high schools that are a collection of Saints. St. Anthony’s, St. Joseph’s, St. Dominic’s, St. Brendan, St. Rose with a Florida Christian and Belen Jesuit Prep thrown in for good measure. Manhattan College has a definite I-95 Miami connection going on with six student-athletes hailing from the city that will be underwater in 40 years. The Miami guys have nicknames like “Cheeky” (five-foot-six shortstop Jose Carrera) and “YoYo” (senior third baseman Yoandry Galan). The Jaspers history also stakes claim to inventing the seventh inning stretch, attributed to an Irishman named Brother Jasper who ran the show at Manhattan College back in the 1860s, thus the name of the team.

Marist, meanwhile, lost many quality players to graduation last spring. The program is still on solid ground, though, managed by 2005 Marist grad Chris Tracz, who has base coaches that actually stay within the chalked confines of the coaches boxes, a rarity indeed. On the cover of the Xeroxed game program this season is Marist senior captain Zach Passerelle, the matinee idol catcher from Sparta, N.J. When he throws down to second base after the pitcher’s warm-up tosses, the mere force of his throwing gesture flings his catcher’s mask to the ground. Passerelle took an incredible shot from Galan who was trying to score from second base on a Chris Kalousdian frozen rope single to center. Marist centerfielder Graham McIntire scooped up the ball and fired a perfect throw to Passerelle who had Golan bearing down on him. The plate was blocked and Galan plowed into the Marist catcher. Forearm flesh struck cheekbone—an unmistakable sound as the pair fell backward together toward the plate. There stood umpire Charlie Curcio, mask off and surveying the bodies before him, Golan’s Kelly green jersey all over Passerelle’s red and white catcher’s gear.

Passerelle produced the ball—still in his Wilson mitt—and Galan was rung up by Curcio, bringing down the curtain on the inning. The pause before the call contains the beauty of the game for a heaving inhale or two. This breathtaking play-at-the-plate is now extinct at the MLB level but thankfully lives on in the collegiate game.

Though the Jaspers would chip away the Marist lead in game one, Red Fox submariner Ryan Thomas relieved Scott Boches and used his Kent Tekulve imitation to nail down his fifth save of the season. With the sweep of Manhattan College, Marist moved out of the MAAC cellar, leaving the Jaspers and the Gaels of Iona College beneath them.

A glorious and sun-drenched trip to Poughkeepsie meant another chance to stop into Hyde Park’s forgotten bar, the Amber Lantern. Hugo the owner was sitting at the corner turn with only one stool available among the lively geezers. Geriatric wisdom was flowing, except for the 30ish guy talking about traffic on I-684 who knows his baseball. He knew Duke Snider used an “i” and not a “y” in his last name and derailed a shaggy dog story from the gent on his right. The Busch draft (the lone tap beer available) spilled forth in mugs and the younger guy remembers my last visit was for Ike Davis’s walk-off pinch-hit grand slam. “He’s yours now,” the kid says, as Ike had been traded to the Pirates the previous evening. I thanked him and he offered a few credits on the Red & Ted’s Road Show pinball game over by the phone booth. This machine might be the only non-ironic pinball game in the tri-state area. I happily accept his offer and enjoy the multi-ball epilogue to a fine afternoon.

It appears the Amber Lantern is a warm-up joint for the local VFW Post. Hugo, who’s had the place on the market for at least three years, gets up to leave and everyone bids him a proper adieu. He tells the Tyne Daly bartender to “buy everyone here a drink, you know, on Easter.”
Hard not to raise a glass to Easter. Maybe Ike Davis will resurrect his career in Pittsburgh, and maybe the Marist Red Foxes have rolled away the stone of their MAAC tomb with their sweep of the invaders from Manhattan? Only Jesus (Alou) knows.