There’s nostalgia in this reminder of my long-past youth. 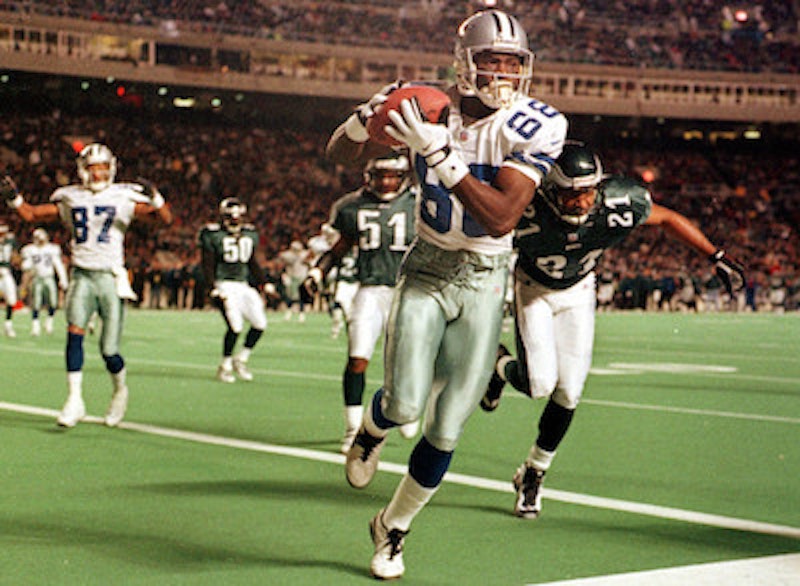 Memory’s tricky: I don’t remember a single specific NFL game my father, grandfather or uncles watched when I was a child. But I do remember that they watched American football. I remember games played on TV in the background of family dinners and other gatherings, back in the late-1970s and on through the 80s. Decades later, American football is, still, for me a sign of the fall.

This is strange because I barely follow the NFL and don’t follow college games at all. I pay attention to the Canadian Football League from time to time, especially in years when the Montreal Alouettes are finding success, but that’s what makes the connection of football and autumn stranger; the CFL starts playing in June and ends with the Grey Cup game in late-November, so is not particularly connected to the fall.

And yet as the days begin to grow short, as afternoon heat becomes a product less of bright sunlight and more of humid air, as shadows lengthen in lengthening twilight and the leaves of the first few tree branches begin to change color, NFL pre-season games announce the fall just as much as every other sign of the season. American teams start to pop up on TV in the evening, and it turns out to my surprise that I’m ready for some football: I’ll sometimes put a game on just to have it on in the background, the crowd noise and the excited-yet-comfortable chatter. From a distance it’s like listening to breaking news that people can be happy about.

There’s nostalgia in this, a reminder of my long-past youth. But I’m not sure that’s the main part. Every year the broadcasts are a little different. New techniques and new camera angles change the visual package. The first-down line. Drone cameras. Games on new days of the week. Say this for the NFL and its broadcasting partners: they don’t rest on their laurels.

The presentation changes, but at the core football’s an outdoor sport and linked to the seasons. Canadians can play football at the height of summer because there’s nowhere in this country that gets as sweltering as the southern US. And we have to end a month before Christmas because of the nature of winter in the north. The times of year that define the American game are different.

Some of that’s linked to the opening of the school year. College football starts with a new semester, and so turns up on TV and impinges on my consciousness. Climate, history and capitalism work together to make up many of the things around us, I suppose, and so football in autumn, when it’s unexpected and new, when there’s excitement and possibility.

This may be the key: possibility. Specifically because I don’t follow the NFL, I feel as though anything can happen and any team can beat any other team. A football season starts with nothing settled, nothing determined, and everybody undefeated. You can hear that in the excitement of the commentators, usually; that’s part of their professional duties, to communicate enthusiasm, to get across to viewers the importance of the game on their screen from which they must not turn away.

But more generally the potential of a new NFL year echoes what’s going on outside the game. As the seasons of the year turn there’s a sensation of a change in the world. Each autumn is new, not only compared to the previous autumn but to the summer just ended. The new season has, in its best moments, the same infinite potential as a sports league starting its own season.

When I was young, without my noticing it at the time, the start of fall was subliminally marked by the start of American football. I can remember a kind of composite moment cobbled together from evenings in those years: a point when a cool darkness settles in outside the windows, and inside a living room is lit by old-style incandescent bulbs. Adults are chatting, and somebody might be smoking. The brown-and-orange-and-yellow color scheme of the 1970s is around, not so much in the rugs and furnishings but the toys and games and knickknacks here and there. There’s nothing digital in this scene, except maybe for a small clock with green or red LEDs. No screens, except for the heavy CRT TV set built into a wooden cabinet, perhaps with a new VCR perched on top of it; a screen that might be as much as 24 inches from corner to corner. And it’s playing a football game from some American city, with American accents explaining the plays and speculating about the season to come.

I remember scenes like this, and I think of football and the fall. At least for right now, the NFL brings an odd mix of excitement and longing. It’s bound up with change, with the mystery of longer nights and less baking-hot days. Soon the novelty will wear off, and, not a fan of football for its own sake, I’ll stop paying attention. But right now it draws me in to an awareness of the time of year: if nothing else it promises that soon, very soon, there will be a new hockey season. And what could be better than that?