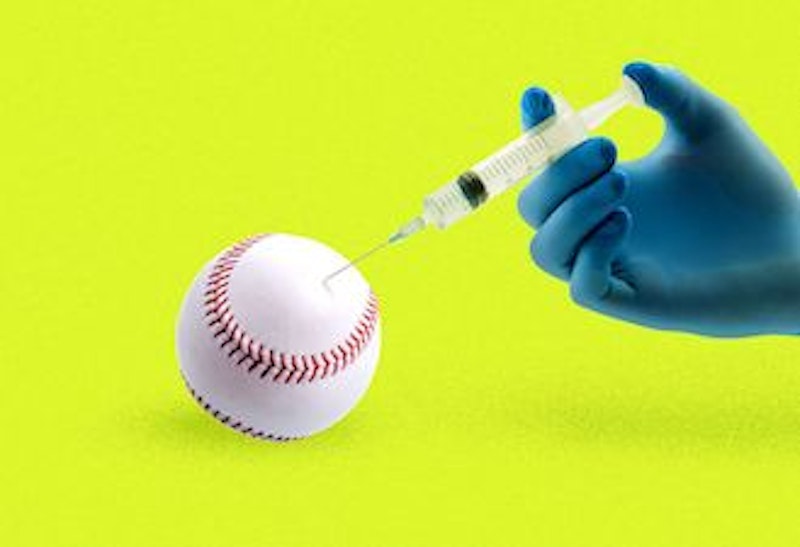 The consensus is that Major League Baseball is amid a "juiced ball" era with altered baseballs to boost the league's offensive production. While there might not be a 60-home run hitter in the league this season, it’s evident by team home totals. For example, last Saturday the Minnesota Twins clobbered the all-time single season home run total for an individual team. The New York Yankees set the record in 2018 (267), but the Twins were on pace for 318 and four teams in total were on pace to top the Yankees' record: the Twins, Yankees, Los Angeles Dodgers and Houston Astros.

Some aren’t happy with this new era of baseball where offense dominates—and might deem it illegitimate. However, the game is constantly changing and this record power surge counts towards the stat book the same way as previous eras of baseball, eras which, looking back, have their shares of controversy.

Looking throughout the history of Major League Baseball, there’s not one place one could honestly look at and say it wasn't plagued by something.The start of the league has its own ugly history where minority players were discriminated against for decades. Jackie Robinson broke the "color barrier" in 1947, becoming the first African-American MLB player since Moses Fleetwood Walker in 1884. One could argue that during this time, the league didn’t have the top competition possible and therefore the stats are tainted. It’s estimated pitchers topped out in the low-80s in Babe Ruth’s time—that’s why he was able to use a 42-ounce bat. Not to mention, the league did not capitalize on Latin American or Japanese baseball talent; that's something that could still use improvement with the number of talented players in the Nippon Professional Baseball League, Korean Baseball Organization and even the Cuban Baseball Federation (thanks, United States federal government).

The "steroid era"—sometimes labeled as 1994 to 2004—is perhaps the most prominent example of when baseball's stats are called into question. Never mind that players worked hard in the weight room and still had to have some talent to begin with, but some of the greatest players of all-time are kept out of the Hall of Fame because they used substances banned by Major League Baseball. It doesn't change the fact that Barry Bonds crushed 73 home runs in a season and is the league's all-time home run champ. Mark McGwire still hit 70 home runs in 1998. And though Sammy Sosa's skin tone has changed over the years since retiring, he is still the guy who hit at least 60 home runs in three separate seasons. It's not as if performance enhancing drugs have gone away from baseball; there are plenty of current PED users.

Steroids weren't MLB's first performance enhancing drugs. Before steroids, a stimulant nicknamed "greenies" were in common use, including some players who are enshrined in Cooperstown; they weren’t banned until 2006.An amphetamine, “greenies” were used by as many as 85 percent of players in some cases, according to the New York Post. As The Post explained, “The drugs help players deal with the grind of a 162-game season. They mask fatigue, increase arousal, increase alertness, increase aggressiveness and reaction time. Some players also claim to see the ball better, which may be because of the increased alertness.”The drug was used by soldiers in World War II and since many MLB players served during the war, they started trying them in baseball—and it worked out well for them.

Given the aversion to performance-enhancing drugs when Bonds and McGwire used them, it would only be fair to asterisk the careers of Willie Stargell, Willie Mays and many other all-time greats who used such a substance.

Prior to 1969, pitching dominated because the rules were different. The mound was 15 inches high as opposed to 10 inches and the strike zone was larger. It used to be from the shoulders to the knees, then it became from the armpits to the top of the knees. As a result, there wasn’t another Bob Gibson posting a 1.12 ERA as a starting pitcher in a single season, and the average runs per game total spiked from 6.84 to 8.14, as Cut4 MLB points out. Perhaps the top sign of how hitters struggled would be Carl Yastrzemski winning the 1968 batting title with a .301 batting average. Meanwhile, as of August 30 this season, there were qualified 14 players with a batting average of .301 or better.

One could argue players are bigger and stronger now than 50 years ago, but there’s also a case to be made that expansion teams in the recent decades have diluted the talent pool of the big leagues. Establishing four new MLB teams in the 1990s created an additional 100 spots in the league that had to be filled by players who otherwise wouldn’t have had full-time MLB jobs. One could also argue when the league expands to 26-man rosters next season that the talent pool isn’t what it once was because a handful of on-the-bubble relievers will have MLB jobs.

Major League Baseball changes decade to decade. Different factors impact the league’s quality of play and whether the offenses or pitching staffs are dominant. The scorebooks are all legitimate. Assuming the baseballs are juiced today, it doesn’t change that reality. One can quarrel over who is truly the best power-hitting team in MLB history, but it’s not as if there is one time in MLB history one could point to as everyone being on an equal playing field.