Some parents say yes, others say no and the rest are conflicted. 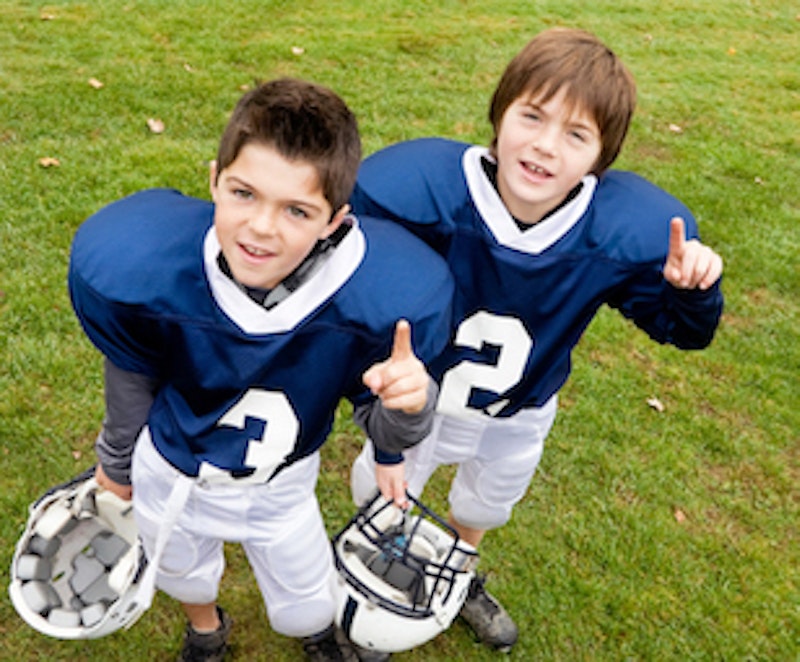 The debate about whether or not children should be allowed to play tackle football continues, and it's no longer just parents who want to make the decision. In some places—like my home state of Massachusetts—it's the nanny state that wants to make the decision. Earlier in the year, a proposal came up in the State House to ban tackle football until eighth grade. Although there are concerns surrounding the sport, I’d absolutely let my hypothetical son (or daughter under the right circumstances) play the sport.

The fear of permanent brain damage is overblown. Your kid is not going to play in the NFL, so the impact on his brain isn’t comparable to Hall of Fame linebacker Junior Seau or any other retired NFL player who suffered from CTE. One often cited study from Boston University that looked at the brains of 111 former NFL players and found 110 of them had CTE leads to this panic. Not only is the level of impact different than that of the pillow fight that’s youth football, but also the NFL has had tens of thousands of players and these were selected because they were thought to have had the problem.

Rather, it’d be more accurate to see how playing high school football has impacted the average man's cognitive function over the years. One study followed thousands of high school football players from the Class of 1957 of high schools all throughout Wisconsin and tracked them for several decades. According to Reuters, they concluded that, "at age 65, cognition and depression scores were no worse among the former football players than among the men who never played the sport during high school."

One could correctly argue that was a different era. It was a time where athletes were not in as good of shape, concussions weren't taken seriously, guys drank water out of a hose and practices were presumably more physical. My own experience playing football from 2010 to 2014 was positive. Of anything I tried growing up, it was the one activity that stuck and the one I grew from the most. The first day of practice for eighth grade football in 2010, I ate a box of Mike & Ikes beforehand, forgot my helmet and had to go back home to get it and wheezed my way through the warm-up lap.

I couldn't do a proper lineman stance, nor had I touched a weight in my life (my parents bought into the "weightlifting stunts your growth" lie). Fast forward to December 2014 and I was a part of a 45-6 MIAA Div. 2 State Championship win over Longmeadow High, got to play football at Gillette Stadium and had a couple of colleges who wanted me to play for them. Sandwiched in between there was lifting weights three days per week with the team, suffering a concussion in 2011 (and playing through it), an 0-11 season for the varsity team in 2012 and not getting to play in the final two JV games of the 2013 season (and having never played in a varsity game) as a junior which had me ready to just give up since I wasn't big enough to play the line or fast enough to play anywhere else.

Instead of giving up, I tried the one position I’d never attempted—long snapping—and learned how to do it by watching YouTube videos, practiced it for an hour most days from the time the 2013 season ended to the time the 2014 season started and finally got the varsity job five weeks into the regular season; although it only got me out there on punts and extra point kicks it was the first "role" I had on a football team. And while correlation is not causation, Marshfield High never lost a varsity game I played in (10-0).

There are a lot of positive lessons football teaches kids. They teach kids to work together and interact with a large and diverse body of people. They have to learn to accept discipline, listen closely to their coaches and deal with unreasonable people. In order to stay on the team in high school, one must keep their grades up and refrain from substance abuse, which in turn increases their odds of graduating high school. They must learn time management. And kids have to stay in shape.

Could actions be taken to make the sport safer? Absolutely—and parents should push for them. At the youth level, many leagues have weight limits based on age groups to ensure safety (which makes it safer than high school football from my experience). Limiting contact drills at practice is a proven way to limit concussions—which mostly occur in practice. The WIAA in Wisconsin cut the amount of concussions in high school football in half by limiting the amount of contact allowed at practice. And in college football, the Ivy League slashed their concussion rate by 68 percent by pushing kickoffs up five years and giving teams an additional five yards for a touchback.

Granted, high school kickers can’t kick nearly as far as college ones; modifying kickoffs wouldn’t hurt. Or, your kid could just kick, punt or long-snap and not worry about head injuries—unless they’re trying to impress their female (or other gender) counterparts. For that, those aren't the positions to play, long-snappers especially. It doesn't sound very cool when you have to explain to people what you do in the games. But if that's the only reason a kid wants to play football, I take everything back and say they probably skip it.