Donald Trump and the Death of “Stick to Sports”

Sports is popular culture, not a “distraction.” 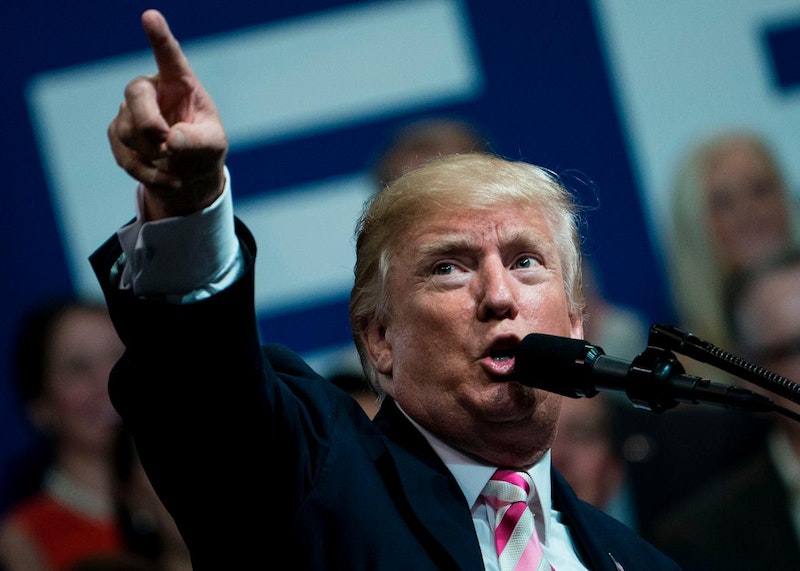 No one expected last weekend to be dominated by a fight between Donald Trump and America’s black athletes, but that's what we got. In the space of about 12 hours, Trump trashed football players who kneel during the national anthem ("Get that son of a bitch off the field!") and uninvited the NBA champion Golden State Warriors from the White House due to star Steph Curry's reluctance to attend. All through Saturday and Sunday, prominent athletes (LeBron James, Martellus Bennett) responded to Trump through social media and symbolic actions, kneeling or linking arms during the national anthem just as the targets of Trump’s ire have done.

The debate that’s followed Trump’s comments has featured some highly effective righteous anger, as well as insightful commentary on the nature of white supremacy, protest, and sports itself. At the same time, given the number of pressing concerns facing the country and the world right now, many commentators have complained that sports-based controversies are a distraction. "Trump joining NBA Twitter is fun," chided Vox's Matt Yglesias on Twitter, "but Trumpcare isn't officially dead yet and it's most dangerous when people aren't paying attention." Some have gone far enough to suggest that Trump is deliberately focusing on the trivial in order to create a diversion, allowing him to advance substantive evils like healthcare or tax reform or the newly revised travel ban.

The central premise of these criticisms is that policy is important and rhetoric is not: policy affects people’s lives, whereas rhetoric is just empty verbiage. Yglesias’ description of the fracas as “fun” is a tell—to him, it’s an entertaining distraction, but one we can’t afford to indulge in right now.

But it’s a terrible mistake to think that rhetorical issues are basically meaningless and only policy has any impact. Now more than ever it's clear that one of the major powers available to a president is setting the tone of the public narrative, for better or worse. The Trump administration has caused plenty of damage in the policy arena—more through strategic negligence than legislation—but not as much as many feared: as yet there’s been no wall, no tax cuts, no Trumpcare. (A Saturday dominated by the athletes story didn't save Graham-Cassidy from edging closer to death Sunday morning.) But Trump has arguably caused more damage with his rhetoric—he's approved of white supremacists, promoted racist attacks on Latinos and Muslims, demonized his political opponents and the media, and even brought us to the brink of nuclear war. Think about the situation we have now, in which Nazis are marching proudly and white supremacists commit assault and murder without even trying to disguise their motives. Did that come from some piece of legislation? Or did it come from Trump (and other prominent Republicans) signaling through rhetoric that white supremacist discourse is acceptable?

Some might argue that attacking Colin Kaepernick or Stephen Curry is different than attacking, say, Judge Curiel or Khizr Khan. But that’s based on the false premise that sports are detached from public discourse. Sports are culture, and culture is where the culture wars are fought. What we saw last weekend, in fact, is the death of "stick to sports"—the idea that sports are divorced from politics, and athletes and sports commentators should refrain from commenting on the latter. This has always been a misguided idea—athletes from Jesse Owens and Jackie Robinson to Muhammad Ali and Billie Jean King have been willing or unwilling political figures—but it’s now been exposed as absurd: when the president’s platform of white grievance includes not just politically active athletes but even personal fouls in football, it’s clear that sports are bound up in political discourse. There’s no direct connection between “Personal foul calls are ruining football” and “Mexico is sending their rapists to the United States,” but they go together seamlessly: both dispense with compassion in an attempt to recover a mythical, simpler past.

In that context, it’s perfectly appropriate for the Warriors to decline an invitation to visit Trump’s White House. I’ve no idea if a championship team's visit to the White House will ever again be a nonpartisan issue, as it was as recently as George W. Bush’s presidency. Some would say it never should have been; after all, the presidency is obviously the ultimate partisan political office. I regret the loss of a nonpartisan celebration of the triumphant heroes, and I wish the United States had a head of state who wasn't the head of government, like parliamentary systems do, to conduct such a celebration. But right now we have a president—and a party—that’s committed to undermining the civil society on which sports, like everything else, rests. Athletes should not remain neutral about that effort.

As long as there are celebrity athletes, there will be people who ridicule those athletes’ attempts at political expression, but Trump has done us the favor of exposing that ridicule as hollow. The question isn’t whether sports are part of political discourse, but whether the athletes themselves will avail themselves of that discourse. Increasingly, it seems, they are, and those who oppose Trump and what he represents should encourage them—not dismiss them as a distraction.