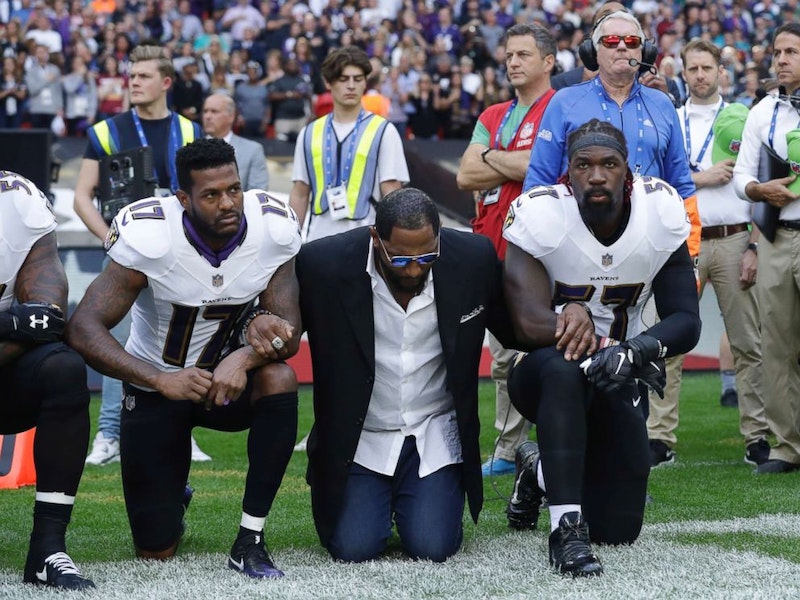 Steve Mnuchin, Treasury secretary and flap-faced rich guy, says football players “have the right to have the First Amendment off the field.” His view can be defended, I suppose. People on the job don’t get to say things they might say off it. Contract clauses or team rules might bind players from being controversial when the cameras are on. But the contracts and rules don’t seem to do that. What the players have to deal with is booing, both in the stands and on the part of Mnuchin’s boss. This boss is the walking ball of disgruntlement known as Donald Trump. He’s been on a tear about players who take a knee during the anthem and how they ought to be punished.

Maybe Trump wants to give his devotées something to get pumped about as Obamacare repeal dribbles toward its death. Maybe, as a viewer, he can’t stand the sight of black players showing what they think of police brutality. Probably both these motives hold. Walt Disney knew people would like footage of baby seals because he liked footage of baby seals. I bet Trump’s the same way about what grinds his gums as he plays with the clicker. The surprise is that, so far, the divide over player protests has cut against Trump.

Until now only a handful of players took part in the protests. But this Sunday Trump’s remarks caused players, coaches, and even team owners to pull his nose. “NFL players across the league knelt, locked arms, raised their fists and even refused to come out of the locker room during the national anthem Sunday,” writes ESPN. “They were joined by coaches and even owners.” The Washington Post tells us “virtually all NFL players on the sidelines prior to kickoff of Sunday’s slate of 14 games locked arms with each other” during the anthem, though a non-viewer can only guess how they did it while some of them were kneeling.

Some conservatives have sniped that nobody’s on the protesters’ side except sports media. Apparently no, and we’ve found out thanks to Trump. Back when Richard Nixon was defending virgins and the flag against hippies, an aide promised that this strategy would split the country in two and give Republicans the bigger half. All Trump has shown is that the NFL is one big lump, and that this mass favors the right of athletes to make with uncomfortable opinions. How the fans weigh in may change matters. But America just had a great day.

Self-awareness, Newt edition.  Now that the boss has pointed a finger, Fox News has been paying special attention to the menace of black athletes with something to say. Newt Gingrich went on air to unload the following sagesse. “If you're a multimillionaire who feels oppressed, you need a therapist, not a publicity stunt,” he said. A multimillionaire who feels oppressed. Does Newt have any idea who he’s flacking for?