One more example of the media’s post-truth era. 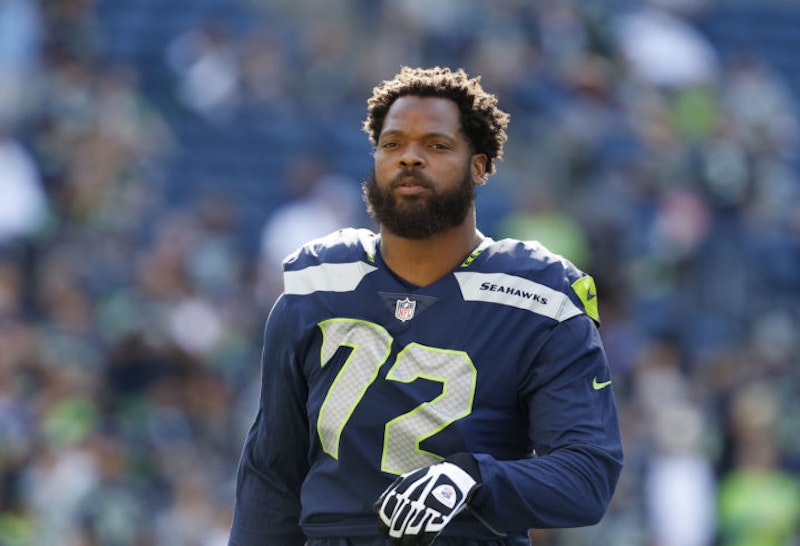 ESPN announcer Stephen A. Smith puts on a face to convey gravitas. He used that visage when he said, “I'm incredibly grateful that Michael Bennett is alive,” referring to NFL player Michael Bennett’s allegation on Wednesday that he was racially profiled and physically abused by Las Vegas police officers after the Floyd Mayweather-Conor McGregor fight that took place on August 26. The announcer added, “He could have been taken out of here considering the kind of climate we're living in now.”

The police were responding to a call saying there was an active shooter in a Las Vegas club that the Seattle Seahawk was hanging out in after the boxing match. As it happened, no shots were fired. It was just a loud noise caused by velvet rope stanchions falling on a tile floor. Nevertheless, there was panic. A video released by the police confirms that many of those people were black, yet Bennett claims that the police singled him out because he was a black man. Smith won't address this key point. He deals with facts that fit outside the narrative by ignoring them.

Smith and much of the sports media (including FS1, CBS, and NBC) reported the event exactly the way Bennett has said it went down in the statement he released. Social media led the way, as it always does when the oppressor/victim dynamic is in play. Conclusions are drawn instantly on Twitter, they spread, and the rage pours forth in a collective spasm. There's a distinct lack of will to get both sides of the story before wailing and pointing fingers. The mob makes up its mind instantly.

Smith didn't say much about the other side of this story, except “The police are going to cover themselves.” In other words, anything they have to say in their defense should be doubted. He knows his audience is eager to have their biases confirmed and wants to marginalize any counter-narratives that may interfere with this. This is another way facts get suppressed in the current post-truth era.

In addition to saying that the two Latino police officers who detained him put a knee to his back, Bennett also stated, “They singled me out and pointed their guns at me for doing nothing more than simply being a black man in the wrong place at the wrong time." But why did the police single out the football star for being black when there were so many black people to choose from? Deadspin posted a photo that it claimed showed a police officer pointing a gun towards Bennett, but the image isn't clear enough to rule out it being just a Taser. It looks more like a Taser than a gun. Bennett said police officer with the gun to his head said, “[I'll] blow your fucking head off” if the Seahawks star moved, but there's no video corroboration of this. TMZ released a video of the detention that showed no police misconduct.

Bennett claimed the police finally released him after realizing he was a famous football player. His attorney, John Burris, released a statement that said, “Only after the Officers confirmed that Mr. Bennett was in fact a Super Bowl Champion and star National Football League player did they finally release him from custody,” as if being on a winning Super Bowl team and a star player automatically makes one immune from future arrests. Such embellishment only makes Bennett's side of the story seem less credible. The police let him go because they realized they'd detained the wrong person.

Las Vegas Metropolitan Police Department Undersheriff Kevin McMahill said that when police charged the club, they saw Bennett crouching behind a slot machine. When they turned to him, he bolted from the casino, jumped over a four-foot wall, and then jumped into traffic. The police, thinking he might have been the active shooter they'd incorrectly been told existed, then detained him as a precautionary measure. They must now review 120 videos to determine what actually happened.

The crux of Bennett's story is that the police racially profiled him. The media reporting this are taking his word, but there's no evidence to support the claim. This isn't ethical, professional journalism. The two cops involved are also minorities, but this is getting played down for obvious reasons. Lacking the racial component, which doesn't appear to exist, the case becomes one of simple police misconduct. The officers must be disciplined accordingly if the 120 videos show that Michael Bennett was telling the truth. Perhaps Bennett, who was one of the players kneeling for the national anthem last season, sensed an opportunity to score some political points with a tall tale. I don't know if that’s true, but it's possible and worthy of media investigation. Even his own attorney admitted that race wasn't a factor in Bennett’s detention, but certain people in the media and on Twitter will keep on saying it was.