Scramble for the American League Wild-Card 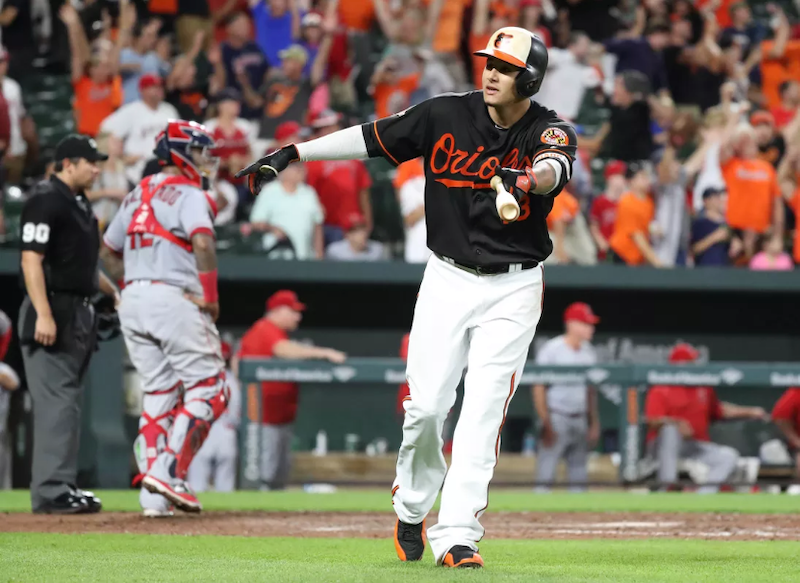 There’s no denying that the 2017 MLB season has been a bizarre one. Whether it’s the historic league-wide home-run binge, the reports of juiced baseballs, or the myriad of injuries to the game’s best pitchers, the season has been a topsy-turvy ride. Add in the fact that the San Francisco Giants have sunk so thoroughly from the top tier of the NL while their rival, the 92-44 Dodgers, are on pace to win 110 games. Whether it’s Aaron Judge’s miraculous first half of the season, Giancarlo Stanton’s insane second, or Phillies rookie Rhys Hoskins hitting 11 homers in a 14-game August stretch, it’s clear that the game is tilting toward the home run. For everyone but the Red Sox, that is. Other than Kansas City, Boston is the lone American League team playing National League-style baseball, relying on aggressive base-running, defense, and a dominant bullpen. Though the story has been told all season, the hole left by David Ortiz is glaring.

Rather than skimming over each of these storylines, let’s dive into one that impacts the postseason: the murky American League Wild-Card Race. As of Sunday night, September 3rd, the Astros sit atop the AL West with a 13.5-game cushion over Texas, and a 3-game lead on Cleveland for the top record and home-field advantage. After a successful and cathartic return to Houston on Saturday, the Astros hope October serves as a unifying distraction for all of Hurricane Harvey’s victims.

In the Central, red-hot Cleveland is on an 11-game winning streak, bumping their lead over the Twins up to 9 games. Meanwhile in the East, the Red Sox lead has been trimmed down to 3.5 games, after the Yankees took 3 of 4 over the weekend. Some Sox fans will be paranoid that the lead is slipping away like it did in 2011. With 25 games remaining and a 3-game cushion in the loss column, the lead doesn’t feel safe. But when you consider the Red Sox are 40-25 at Fenway, and have nine straight home games (Toronto, Tampa, and Oakland) while the Yankees hit the road for nine in a row (Baltimore, Texas, and Tampa), the threat of losing more of that lead in the next 10 days loses some of its potency. A win on Sunday, behind Cy Young-candidate Chris Sale, would’ve given Boston ample breathing room. Instead, the standings watch will get obsessive. After those nine dates, New York faces Baltimore again and then Minnesota, who currently leads the 2nd wild-card spot by 1.5 games over the Angels and Orioles.

In 1994, then Commissioner Bud Selig added the wild-card to the postseason format, while realigning each league, moving from two seven-team divisions in each league, to three five-team divisions in each league by 1998. That was the year the 29th and 30th MLB teams arrived, via expansion. The Tampa Bay Devil Rays (now the Rays) and the Arizona Diamondbacks (now the Goldschmidts) joined MLB. Arizona has regained its swagger this year, and will very likely host the NL Wild-Card game. From ’94 through 2012, the wild-card was given to one team in each league, which kept the postseason entries at four per league, with the best-of-five divisional series as the start of October baseball. Baseball purists, as they often are when any big change is made, were temporarily irate. Gradually, the added postseason round was accepted and the ensuing September and October drama was celebrated. Selig made perhaps a more controversial change in 2012, when he pushed for a second wild-card entry in each league. The wild-card game, was immediately mocked. Dubbed a “coin-flip” game due to the arbitrary nature of a one-game playoff, the race for the two wild-card spots expanded the rooting interested of several more team’s fans each year, as September baseball took on added relevance for six-eight more teams, on those occasions that the races were close. On the other hand, a one-game playoff isn’t exactly the same as a five-game series.

This year’s AL wild-card race looks promising, regardless of the .500 records involved. Today, no less than eight of the AL’s 15 teams are within spitting distance of the second wild-card spot. The Yankees have fallen back to the pack. The surging Orioles have slugged 55 homers in the month of August, four away from the single month MLB record. What’s shocking is that they are one of 11 teams to have 55 in August. With the power surge, Baltimore has vaulted themselves over .500 winning seven straight. Meanwhile, the Twins have climbed into the second wild-card slot with a four-gamer themselves.  Keep in mind Minnesota lost 103 games last year, and it’s easy to root for the young club, which happened to trade for the oldest active player in the majors, 44 year-old Bartolo Colon, in July. Colon, like the old guy with the post-moves on the YMCA basketball court, survives despite the doubters. He managed to resurrect his season after the Twins took a “Why not?” flier, landing him in the Twin Cities. Colon’s 8.14 ERA in 13 starts with Atlanta seemed to spell the end of an illustrious career, but he’s been decent (4.04 ERA in eight starts with Minnesota). 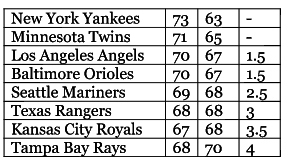 According to TeamRankings, the Yankees, Twins, and Royals have the easiest remaining schedules among AL wild-card hopefuls, followed by the Rangers. Fans of the Orioles, Angels, Rays, and Mariners may not want to know that their climb to the postseason is a steeper one. The lowly White Sox and A's are the two teams every AL team wants to face at the moment. Kansas City gets six more chances to beat the pale hose, while Texas meets Oakland in seven of their final 10 contests.

A variety of teams find themselves involved in this race to the one-game playoff. The Angels front office just pushed their chips into the middle of the table, acquiring Justin Upton and the four years and $88 million remaining on his contract, to provide some support for Mike Trout in the lineup. The Angels rotation, on the other hand, inspires something other than confidence. A team like the Twins are just happy to be in the thick of it, even without slugger Miguel Sano for the last two weeks. Without great pitching—scratch that—without decent pitching, the Twins, Orioles, and Angels are lucky to be in the October conversation. But that idea suggests that October teams should have quality pitching staffs, and two factors may make that idea irrelevant to the major leagues of 2017. While dominant pitching is still a very necessary element to winning once October baseball starts, getting there, especially in the two-wild-card format, may be a different story. The prevalence of pitching injuries and the juiced ball are two key factors in the changing landscape of major league baseball. If even well-executed pitches leave the field as homers, and each off-speed pitch wears down a pitcher’s elbow that much more, the odds of keeping an above-average starting rotation intact for a full season are dismal. Those odds are even worse in the American League, which doesn’t give those on the mound the added boost of facing each other in the batter’s box.

Who will reach that October wild-card game? All we can reliably know is that relievers will be used heavily.