The author takes in game three alone on his computer, after previously watching game one in a bar. 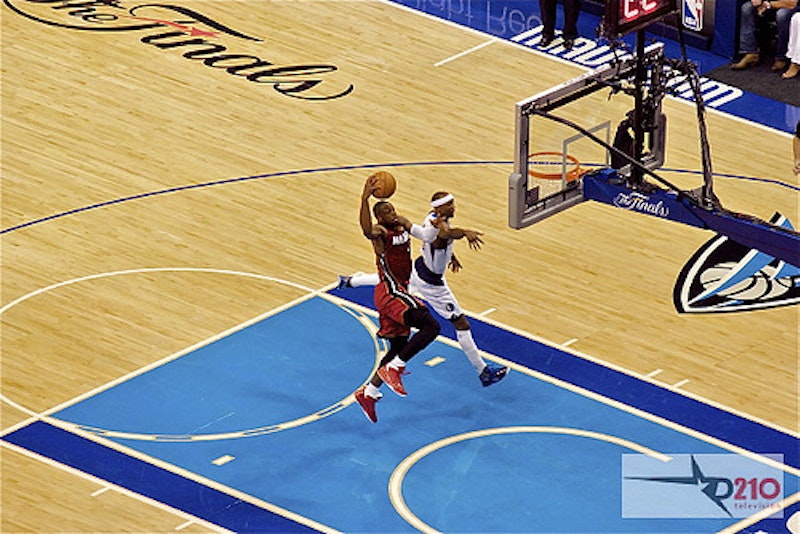 Sports will not let you be alone. This is good but sometimes unsettling. The announcers are talking to you and you’re watching people from far away, but in no way is it voyeuristic: you’re seeing athletes perform, ostensibly for your enjoyment (and okay, maybe a hefty sum of money as well). You’re viewing the same event as millions of other people at that same moment.

Let me be clear: watching sports alone is not weird or bad, though I’ve found that watching with other people is almost invariably better. As a glutton for at least mild discomfort, I tuned into the third game of the NBA Finals alone, seated at my desk, forearm-deep in a box of Cheez-Its, with the game streaming choppily from an undisclosed and probably illegal website.

I’ve taken in a large percentage of this year’s playoffs on my computer. There are a number of reasons for this, but most of them have to do with me not owning a television and being too broke or lazy to watch the games in a bar. Add to that the early West Coast start times and it’s easier to eat dinner and watch at home.

When I open the game, a pop-up window immediately tells me I’ve won something. As this is an illegal stream and you’re watching for free, the people running it have zero qualms about raking in as much ad money as possible. Every few minutes a box will appear directly over the video player imploring you to try a new diet pill or book a flight somewhere. Most of these can be clicked off, but the more insidious ones will spring up in parts of the browsing window that you can’t see or scroll to, and so all of a sudden a ringtone-quality version of “Paranoid” by Black Sabbath will burst in, mixing with the tinny sounds of the game and the announcing crew, forcing you to endure Stan van Gundy’s insatiable grumpiness backed by Tommy Iommi.

The ads are annoying, but the larger problem is the constant freezing and relatively low video quality. This particular website usually has six serviceable links that one can toggle between if the one you’re watching starts to fail. I don’t know what causes the links to freeze, just that it happens often. Many times this results in that weird effect you often see during Skype or video chats, when the whole screen freezes on your friend’s face, lips stuck mid-word and the face in a typically extremely unflattering contortion, and then the feed will slowly get back up to speed, resulting in pixilated blocks of the face moving while others remain static. With sporting events, it’s less horrifying than extremely aggravating: Jason Kidd will bring the ball up the court and then the feed freezes, there is a stuttering audio crackle, and then, still with Kidd’s face caught mid-blink, you hear Mike Breen suddenly say “Spectacular dunk!” By the time the feed resumes, it’s a TV timeout and you have no idea what just happened.

These streams are usually choppy, causing the players on the screen to appear to move in stop-motion. Or the streams might have extremely low video quality, to the point that jersey numbers, much less the players’ faces, are entirely indistinguishable, transforming Dwayne Wade visually into the streak he is often compared to. At their worst, really low quality streams reduce the game to some sort of quasi-cubist athletic nightmare. You ask yourself: how many people are on the court right now? Why is the court suddenly fluorescent green? Is that the Grimace?

Needless to say, the minutiae of the third Mavs/Heat game is pretty much lost on me. Helping make up for that, however, is multi-tasking, and I flip back and forth over a few different websites that are live-blogging. This, though, proves to be almost entirely exhausting, as my stream is often a little bit behind. By the second quarter I find myself listlessly refreshing my g-mail account before realizing that I was watching a basketball game.

About halfway through the third quarter the stream I’m using suddenly stops carrying any television advertisements, instead using various shots of the Dallas arena, with no sound accompaniment. The effect is surreal. Stadia without noise seem grim and spooky, as though they are massive tribunals or funereal gatherings. The Dance Cam comes on (it appears I’m watching the in-arena feed) and shatters my poetic reverie, as a middle-aged woman insouciantly rattles her chest directly above the head of a slack-jawed youth wearing a blue plastic Afro.

These long stretches of silent arena shots also slow my perception of the game. Television ads at least give you something to avoid or detest or lampoon (like KFC and Taco Bell’s laughable attempts at selling “quality” food). Without ads, you get a sense for how slow the game can move, and consequently the fourth quarter of a very exciting game is somehow tepid and mild to me. It’s clear that Miami can’t close out games, but Dallas seems equally incapable of taking a lead and keeping it. Dwayne Wade has pretty much claimed the Finals MVP trophy if the Heat win, but LeBron is not as absent as the Internet. Also clear is Dirk’s almost criminal lack of help. No one is shooting well: not Terry, not Barrea, and certainly not the Grimace.

The game ends on a Dirk miss—well defended by Haslem—a shot I am convinced will go in until it doesn’t. As soon as the game is over, I’m filled with the need to blather about it with someone, and in person. I fidget at my computer. I realize I’ve eaten two-thirds of a box of Cheez-Its. I check Facebook for (embarrassingly) probably the 30th time in less than three hours. I brush some of the nuclear orange crumbs out of my chest hair (did I mention I was watching in my underwear?) locate a shirt and some pants and step out into the long twilight of a Seattle evening.

It’s difficult to discern why watching sports alone seems slightly odd. Certainly there’s the missing camaraderie of it. Basketball, with its preponderance of spectacle and short breaks, is tailor-made for the superficial and laudatory conversations that don’t really mean anything but are nevertheless fulfilling. Maybe this can be simulated online, via Twitter or live blogging, but it doesn’t seem the same. A lot of basketball is about spectacle, and a lot of spectacle is about being present, about the feeling of “I was there” and by extension “I was there with…”

That’s something the Internet can’t replicate just yet.