Oh How I Hate Ohio State

Michigan fans have no sympathy for the recently deposed Jim Tressel and his cheating ways. 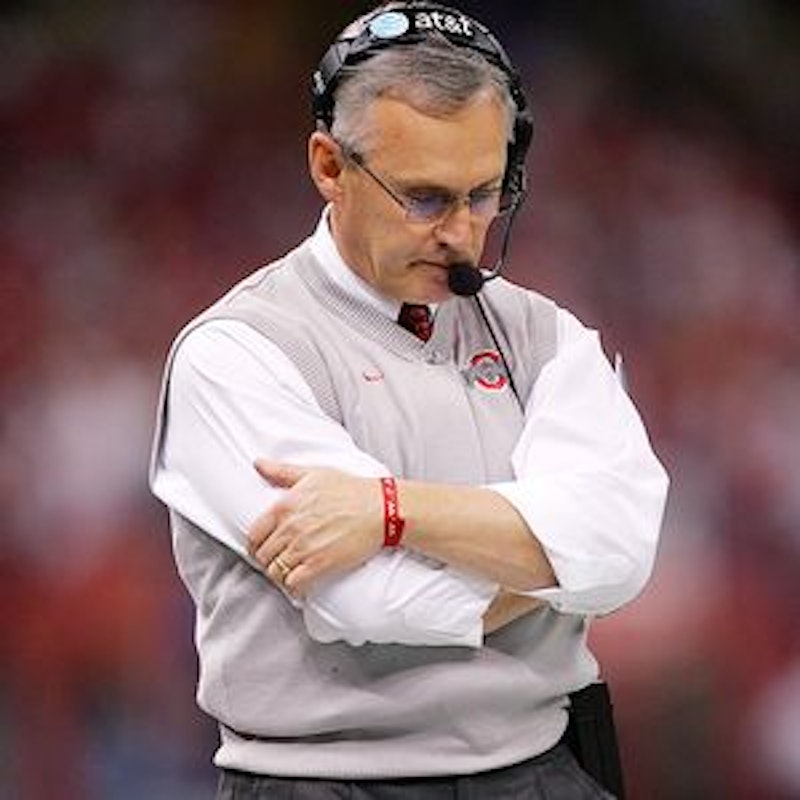 As a graduate of the University of Michigan, it should come as no surprise that I strongly resent Ohio State, if not outright loathe the Buckeyes. The “fact” we never beat them during my four years doesn’t help, as does Rich Rodriguez’s cratering of the winningest college football team of all-time (that would be Michigan) shortly after my graduation and Lloyd Carr’s retirement (and no, no one has ever pointed out how similar our names are). I’ve heard plenty about Michigan’s struggles and OSU’s dominance from those jerks in Columbus, but the last laugh belongs to the maize and blue. Now its your program’s turn to take a nose-dive, and I have zero sympathy.

Jim Tressel stepped down as head coach on Memorial Day, kicking off what many Michigan fan’s are already dubbing “the greatest June ever.” The Sports Illustrated article that hastened his resignation wasn’t quite the bombshell Michigan fans were hoping for, but the additional allegations uncovered going back to Tressel’s days at Youngstown State are nonetheless pretty serious, and likely to result in the dreaded lack of institutional control ruling from the NCAA.

Michigan blog Genuinely Sarcastic provides a timeline of OSU’s violations, and here’s what they say it all means:

“Nothing Ohio State has accomplished in the last 10 years is valid anymore. From Clarett, to Smith, to Pryor, and all the others in between, with the cars and the cash and the discounts and the cutting of corners, Ohio State is essentially an SEC school operating in the Midwest. Tressel is a proven, documented cheater, and if the NCAA has any balls at all, they will slap him with a show-cause order, blackballing him from ever coaching again. He has successfully manipulated his public perception so he comes across as a righteous, homely, ethically pure gentleman, when the reality is he's basically a gangster, willing to do whatever it takes to win, and turning a blind eye toward the corruption that he himself endorses. He distanced himself from Ray Isaac at Youngstown when the NCAA came calling. He distanced himself from Maurice Clarett while simultaneously shredding Clarett's credibility when he tried to destroy Ohio State. If some injustice is committed and he somehow survives this latest storm, he will distance himself from Terrelle Pryor and his friends, too.”

OSU Fans have already begun to crow that nothing can minimize their on-field accomplishments—that tat’s and cars have nothing to do with what happens between the lines. I’m sorry, but no, those wins will most likely be vacated, every single victory was due to contributions from inelegible players, none more so than Terrelle Pryor.

Now under a separate investigation by the NCAA, Pryor’s career at OSU is almost definitely over, but the damage he’s done will linger. From the eight cars in three years, to the constant equipment/memorabilia dealing and the amazingly idiotic statements like, "Not everybody's the perfect person in the world. I mean everyone kills people, murders people, steals from you, steals from me, whatever. I think that people need a second chance, and I've always looked up to Mike Vick, and I always will."

No kidding Terrelle? Everybody steals? As ridiculous as that sounds, it seems to be a popular defense for many fans that claim this sort of thing happens everywhere. Not according to a walk-on from Texas, who wrote a must-read article about compliance at another major program that hasn’t had to resort to cheating to stay dominant.

“The idea of selling equipment would never occur to anyone in the Texas locker room. We used to joke that new socks and jock straps came out of Chip’s personal salary. If you ‘lost’ a helmet or set of shoulder pads, odds are that you would have to practice without them for a week, pay for them, and Mad Dog [coach Mack Brown] would have one of his ‘reminder’ sessions with you. That’s a guess though, because nobody was stupid enough to try to sell gear.”

Now, I have no direct knowledge that Michigan is totally clean, but the NCAA recently investigated Michigan thoroughly, and found them guilty of nothing but about an extra hour a week of stretching that they weren’t counting towards the practice limit. Not exactly the Fab Five scandal that the basketball program is still recovering from, a disgrace the athletic department seems determined to never let happen again. Wolverine football players may get treated like gods, but they don’t get free cars, let alone cheap maintenance, as this story from Mgoblog user CRex demonstrates:

“As someone who once helped a football player fix his car, Michigan compliance was so far up my ass there was a blue lot in my lower colon and I almost got my own blue bus stop. The player bought the tie rods and I did the labor since I knew how and had the tools. He paid me for my time in beer and pizza. Compliance jumped all over this and figured out the hourly rate for a mechanic was greater than the cost of the beer and pizza, thus he still owed me money. I attempted to lowball my time estimate for doing the job, they talked to a real mechanic and got the official time estimate for tie rod replacement. They were also unimpressed by the fact I helped all my friends fix their cars in exchange for beer and pizza. So they basically stood over him while he wrote me a check for what they demanded the difference was. They also made him pay my uncle who let us use the lift in his garage. I tossed the check aside and figured, ‘I might cash this if he gets drafted, maybe.’ Someone though noticed the money never came out of his account and started calling me about cashing the damn check.“

The NCAA is going to come down hard on Ohio State. How hard depends on what else surfaces in the next few months, but anything short of a multi-year bowl ban and a reduction in scholarships would be an outrage. This isn’t a renegade player like Reggie Bush taking money from an agent, or something Terrelle Pryor, Troy Smith, and about 30 other players are solely responsible for. This is a coach playing by his own rules and finally getting caught with his pants down. The only thing left to do is beat the Buckeyes on a level playing field, restoring college football’s greatest rivalry to where it was before Tressel’s shameful tenure.