Cubs' Prospects Head to the Desert 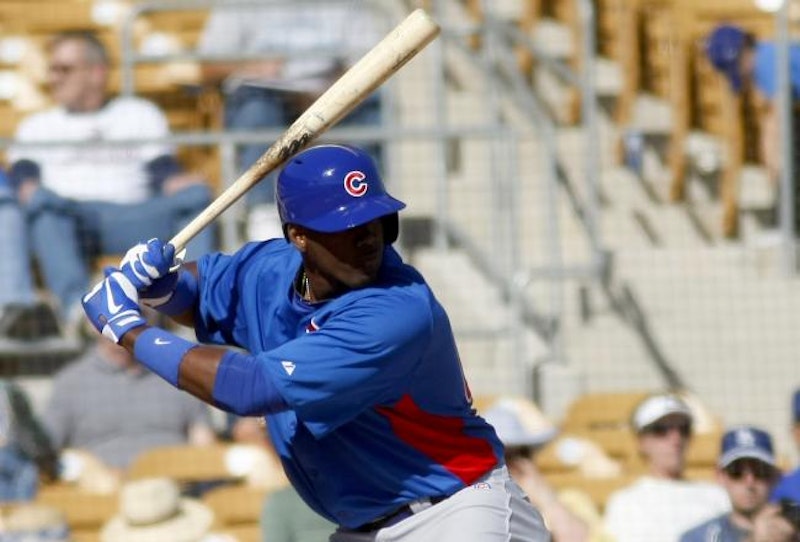 The Joe Girardi sweepstakes figures to command the attention of the Cubs’ front office and Chicago headlines for the next few weeks. Girardi’s potential hiring could bode well for the Cubs’ future but the performance of several key prospects in the Arizona Fall League may be even more important.

The Cubs jettisoned manager Dale Sveum immediately upon the completion of the 2013 season reportedly due to Sveum’s relationship, or lack thereof, with the team’s young stars. Theo Epstein and company made the decision that Sveum wasn’t the right man to oversee the continued development of Starlin Castro and Anthony Rizzo, let alone the team’s quartet of impact prospects (Javier Baez, Kris Bryant, Albert Almora, and Jorge Soler.)

Three of those youngsters (Bryant, Soler, and Almora) will begin play this week in the Arizona Fall League. Baez was originally scheduled to join them as a member of the Mesa Solar Sox but will now reportedly sit out the fall season. Baez is coming off a monster season in which he hit a combined 37 home runs with 111 RBI and a .920 OPS between Double-A and Triple-A. The shortstop did strikeout 147 times in 2013 but he’s generally considered one of the top 10 prospects in baseball and a legitimate big league shortstop. Baez’s prospects status is high and if the Cubs intend to deal him in the offseason for a top of the rotation start (David Price?) there’s no benefit to sending him to Arizona. With Starlin Castro signed to a long-term deal the Cubs could be looking at the prospect of shifting Baez to third base where he could eventually compete with Kris Bryant for playing time.

Chicago selected Bryant with the second overall selection in June’s amateur draft. The slugging third baseman from the University of San Diego signed early enough to play 36 games and log 146 at bats in the Cubs’ minor league system. Bryant made quick work of minor league pitching as finished the season with Daytona of the Florida State League. Bryant finished the season with nine home runs, 32 RBIs, and 1.078 OPS in three minor league stops. If Bryant excels in Arizona he could earn a spot on the Double-A Tennessee Smokies roster to start the 2014 season and be just a phone call away from Wrigley Field.

Almora and Soler represent the future of the Cubs’ outfield. Almora was selected in the first round of the 2012 MLB draft. He was impressive in limited action following his signing and shot up prospects rankings due to his excellent defense and advanced approach at the plate. Almora’s 2013 season got off to late start due to a broken hamate bone suffered in Spring Training. He performed well for the Single-A Kane County Cougars before a groin injury derailed his season in early August. In between injuries Almora managed to hit .329 with just 30 strikeouts in 249 at bats. He’ll look to make up for lost time in Arizona and show that’s he’s ready for the jump to Daytona or possibly Tennessee. Almora is widely regarded as the Cubs’ center fielder of the future and the ballclub figures to be patient with the 19-year-old.

Soler arrived in Chicago with much fanfare and even more expectations; a nine-year $30 million contract for a Cuban defector who hadn’t played an inning of professional baseball will do that. He played sparingly in the summer of 2012 but looked poised for a breakout after an impressive Spring Training stint with the Cubs last March. Soler began the 2013 season with Single-A Daytona and quickly made headlines for the wrong reasons including getting benched for loafing and threatening an opposing player with a bat. Soler performed well on the field posting an OPS of .810 with 13 doubles and eight home runs in 55 games before an injury to his left shin, original caused by a Spring Training foul ball, sidelined him for the remainder of the season. As fellow Cubans Yasiel Puig and Yeonis Cespedes propel their clubs to October success Soler will be looking to make up for some lost at bats and show the Chicago brass that he’s healthy and ready for 2014.