Orioles Will Compete Next Season

That is, if the front office is aggressive. 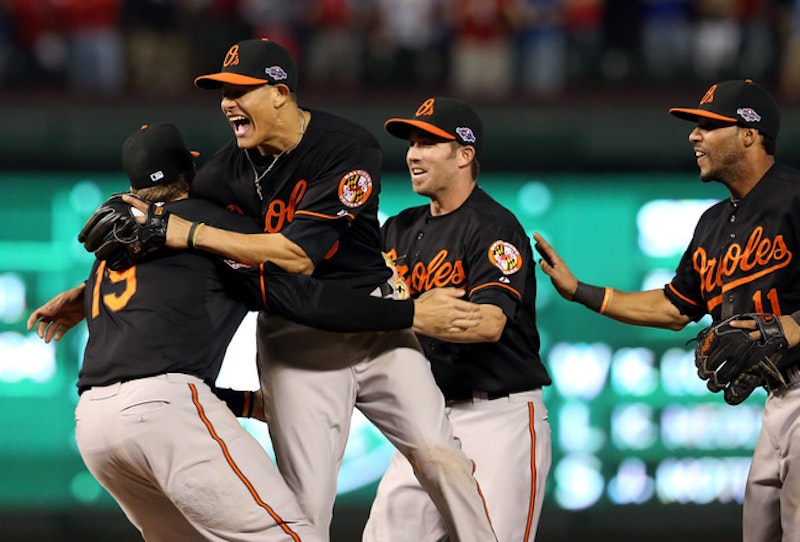 Last week I went on a bit of a rant about the Baltimore Orioles’ continued failings with runners in scoring position and their collapse in Tampa during the season’s penultimate weekend. I suggested that the time for a more measured look back on the season lurked somewhere in the future. Today, following the Pittsburgh Pirates’ triumphant return to Postseason baseball, I’m ready to look on the bright side when it comes to the O’s.

Missing out on the playoffs stinks but it doesn’t come close to rising to the malodourous level of finishing under .500 for 14 seasons. The Orioles put together an amazing run in 2012 that will stick with me forever. Attending Game One of last season’s ALDS in Camden Yards gave my family memories that no amount of blown saves or runners left on base can erase. Watching the crowd in Pittsburgh on Tuesday night made me grateful for the Orioles’ successes of the past two seasons and hopeful for the future. I’d even consider rooting for the Pirates this month if I weren’t so sure that most of those fans who packed PNC Park have Terrible Towels in their trunks.

The 2013 season was one of growth for three of the Orioles key contributors; Chris Tillman, Manny Machado and Chris Davis. While Davis and Machado garnered much of the national attention, Tillman finally took the step forward that so many had predicted since he arrived in a trade with Seattle over five years ago. He made the All Star squad in 2013 and posted 16 wins. His win total could’ve been even higher if not for the bullpen’s propensity for blowing leads in his starts. The next step for Tillman will be to pitch deeper into games so that he’s not as reliant on the bullpen. After struggling in first three stints with the O’s, Tillman has gone 25-10 over the past two seasons. He’s not an ace but he’s the best starter the Orioles have had since Mike Mussina left town over a decade ago.

There isn’t much to say about Chris Davis’ season beyond “Wow!” It was clear he had tremendous power after he bashed 33 homers for the O’s in 2012, but the strides Davis made in his plate discipline were impossible to predict. Davis nearly doubled his walk total from 37 in 2012 to 72 in 2013 and while he slowed down considerably in the second half, he still led the American League in home runs and RBIs. The good news for the Orioles is that Davis is under team control through the 2015 season and Dan Duquette has already expressed interest in inking the slugger to a long-term extension.

Manny Machado is a joy to watch and I’m glad he’ll be wearing orange and black for at least the next five seasons. Machado slumped badly in the second half, and Buck Showalter has drawn some criticism for running him into the ground, but his defense never flagged. The horrible knee injury that prematurely ended Machado’s season isn’t nearly as serious as it appeared at first glance.

While Duquette deserves to be criticized for failing to address the holes at second base and DH last winter and throughout the season, he should be commended for piecing together the best starting rotation Baltimore has witnessed since the late 1990s. Tillman is dependable; Wei-Yin Chen and Miguel Gonzalez posted solid seasons in 2013 and erased fears that they were one-year wonders. Bud Norris struggled after coming over from Houston but the Orioles could do, and have done, worse at the fifth starter spot. The 2013 rotation will likely be rounded out by Kevin Gausman. The 2012 first rounder out of LSU was rushed to the big leagues this season and his appearances generally ranged from “Oh wow!” to “Oh God!” but he is considered one of the top prospects in baseball and is Baltimore best hope for developing a future ace. Dylan Bundy’s Tommy John surgery, and the feet dragging that came along with it, were a huge setback but the young righty could be ready to contribute late in the 2014 season.

Duquette has already said that the ballclub will retain closer Jim Johnson for next season. Johnson will be a free agent following the 2014 season and the team has to hope that he’ll be primed for a bounce back year following the disappointments of 2013. Duquette has also stated that Baltimore hopes to sign catcher Matt Wieters to a long-term deal. I wouldn’t hold my breath. While Wieters has emerged as a defensive standout his offensive progression has stalled. Wieters is unlikely to sign an extension coming off his woeful 2013 campaign. It may be time for the Orioles to look into dealing the catcher while he’s still two years from free agency. Nick Markakis may have been an even bigger disappointment than Wieters. Markakis was a shell of his former self in the second half and posted a career low .685 OPS. He’ll make $15 million in 2014 in the last year of his contract. The O’s will need to hope for a contract year resurgence from their right fielder and at a minimum may need to acquire a right-handed bat so Showalter can sit Markakis against lefties.

In retrospect the 2013 Orioles were good but not good enough. There’s no shame in that, but there is shame in not trying to get better. Dan Duquette and Buck Showalter have some major holes to address this offseason and I’m hopeful that their efforts yield more nights of playoff baseball in Camden Yards like those glorious times of a season ago.