The Risk in MLB Imports

Is Jose Dariel Abreu worth a big commitment? 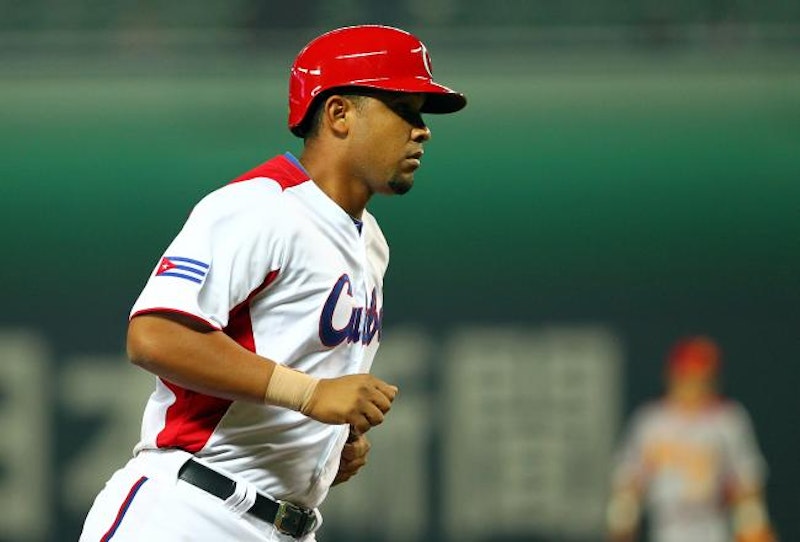 As I’ve written before, I’m a Red Sox fan who’s jazzed that his team is still playing in October. The Sox are far from perfect—they’re a fairly ragtag group of guys (albeit by design)—but somehow everything worked out perfectly, and this weird combination of athletes came together to form the best team in baseball. Yes, I’m excited, but this is unusual for me. Generally, the offseason is what I live for. The winter months mean stress and reward for me. The regular season simply functions as a way of observing how well the machine works. The offseason, however, is packed with a steady stream of action—free agent signings, trades, and organizational restructuring excite me more than a weekend series with the Yankees. I go into every winter with a wish list of players that I want my team to acquire. This offseason is no different. Who tops my list this year? Like many other fans, it’s Cuban defector Jose Dariel Abreu.

There’s a huge amount of risk attached to the slugging first baseman. Naturally. He is an import after all. Imports of all kinds (though we most commonly see them from Cuba and Japan) are a roll of the dice. Look at the failures: Daisuke Matsuzaka, Jose Contreras, Kei Igawa, Hideki Irabu, Tsuyoshi Nishioka, Adeiny Hechevarria. There are also success stories, the ones everyone is quick to point out. From Japan: Ichiro, Hideki Matsui, Hiroki Kuroda, Koji Uehera, Yu Darvish. From Cuba: Aroldis Chapman, Yoenis Cespedes, Yasiel Puig. Notice that the Cubans I listed are all very young and have just started their MLB careers. It seems like there’s a rash of youthful Cuban players defecting lately. Jorge Soler, who signed with the Cubs for $30 million last summer is another name to watch out for. He’s only 21, but, per many scouting reports, has more upside than both Puig and Cespedes.

The riskiest (and also most exciting) part about imports, especially Cubans, is the mystery that surrounds them. In general, the statistics they put up in their home countries don’t carry much weight in the U.S. Who knows how Japanese competition stacks up to the MLB? There’s no use in comparing the two leagues. For imports, statistics are only helpful to see how heavily they dominate their peers. Matsuzaka and Darvish are two good examples. When “Dice-K” was being posted, everyone raved about his numbers (and his Gyro ball). And they were good. In 2006, his last year in the NPB, he recorded a 2.13 ERA (FIP and SIERA are not available for NPB stats, so ERA will have to do). In the three years prior to that, he posted sub-3.00 ERA’s with strong strikeout numbers. Good, but not the tank that some writers pegged him as. Darvish, on the other hand, for all the hype, may have been underrated. Reporters still had a bad taste after Matsuzaka’s failed transition. By 2012, when he was posted, Darvish hadn’t recorded an ERA above 2.00 in five years. 2011, his last season in Japan, was a hallmark year for the pitcher. He averaged over eight innings per start and struck out batters by the dozen. His ERA was 1.44.

Is Jose Dariel Abreu utterly dominant? Maybe not like Darvish, but signs point to yes. In 2011-2012, Abreu hit .383/.535/.735 and has performed similarly in past seasons and worldwide tournaments. No matter how impressive they are, though, in regards to imports, numbers are secondary to scouting reports. As a stat head, this does not please me. But that’s just an issue of personal bias. I readily admit that scouting reports are essential to the assessment of players, especially young ones. I’m not a scout, but do know that Abreu’s reports have come back mostly positive, with a few scouts noting a lack of range at first base and heavy build that could eventually tone down his athleticism. Translated: he’s kind of fat.

The answer’s simple: signing Abreu is risky. Do I still want the Sox to do it? Absolutely. As a fan, there’s nothing I’d like to see more.