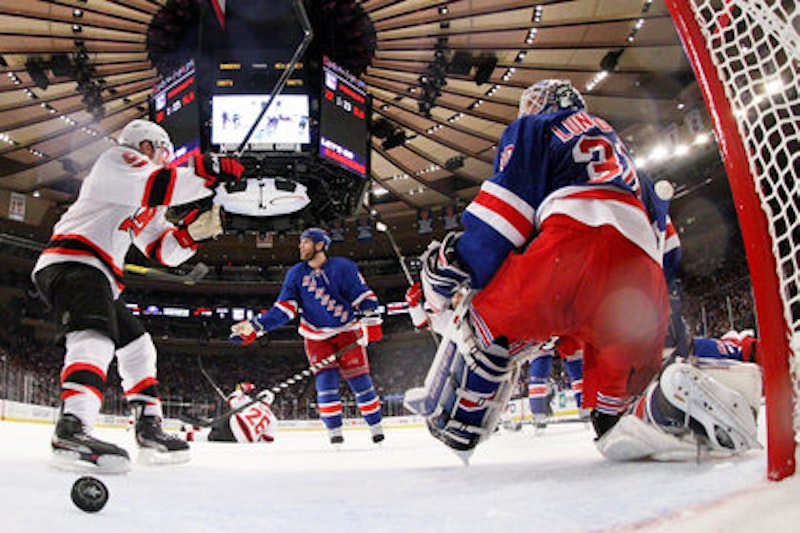 Even with Whitey Bulger behind bars, Boston still hogs the victory chalice. Like last Sunday when the Patriots and Red Sox both staged late dramatic comebacks and nauseated the half of the nation that does not root for the Boston squads. Sometimes these fans need somewhere to hide, and the NHL can be a perfect deep umbrella to open as the screaming of “Sweet Caroline” commences ad nauseum.

But it’s hard to take the usual October refuge with hockey because the New York Rangers have been sent on a torturous road trip walkabout to open their season. (Even the U.S. national soccer team, another potential off-season distraction, has been ruled out since they’ve already won the CONCACAF Hexagonal and have punched their ticket for the World Cup tournament in Brazil next summer.) It’s a toss-up as to which is more depressing, the “renovation” of the fifth version of Madison Square Garden, forcing the Rangers to play their first nine games on the road, or the fact that Super Bowl XLVIII is going to be played at MetLife Stadium off Patterson Plank Rd. in East Rutherford, N.J. this coming February. Very few actually care about the former, and the latter has yet to sink in with a lot of media types, especially those accustomed to the tropical junket the NFL annually ruins with a championship football game and quasi-concert “halftime show.”

Both are classic New York City sports fumbles. The Meadowlands was a bad idea from day one, kind of like the Belt Parkway, the BQE, Cory Lidle’s flight plan and bidding for the 2012 Olympics with the Murphy Scam that was the West Side Jets Stadium. As for the outer boroughs, the steakhouse pretense of the new Yankee Stadium positions it as a rebranded Short Hills Mall moved to the Bronx. The Mets are also guilty of bad venue possession as Citi Field’s main entertainment has been the view of the Willets Point chop shops. Though the sightlines and seating are much better than Shea, going to the TARP-sponsored Madoff outpost to watch National League baseball is essentially a trip to La Guardia Airport with a happier ending. Having a Shake Shack beyond the center field wall does not automatically make your ballpark likeable or able to match the picturesque coal trains rolling beyond the right field fence at, say, Watt Powell Park in Charleston, W.Va.

When it comes to sports venues, the last man standing for Gotham was the 1970s plum and gold interior of the Garden during Rangers hockey and Knicks basketball. At least it was easy to get to. The color scheme has of course been “updated” and the never-ending upgrade of the facility—the personal stomping ground of Cablevision poobah James Dolan—is emblematic of his position as the reverse-Midas of several codependent industries. Having suffered through the NHL lockout and the first “phase” of the Garden renovation last year, this year’s delay confirms the silk purse/sow’s ear type of deal. It’s enough to send WNBA fans downstairs to the TGIFridays near the Amtrak counters. It’s enough to make the geezers among us long for Boyle’s 30 Acres out in Jersey City, or that bowl in Long Island City where 10 million boxing fans used to assemble wearing derby hats.

As for the NFL’s woeful Super Bowl location decision this season, they might as well hire Joe Piscopo to start with the Jersey jokes sometime around Christmas Eve. The corporate parties will certainly present transportation challenges from the stadium that looks like an air filter plopped down in the swamps as corporate swells will have to contend with rides through the cluttered Lincoln and Holland tunnels. Jay-Z will probably use a helicopter and is no doubt disappointed that the Jets and Giants shall not meet in an “Empire State of Mind” Super Bowl. Will Fox send a sideline reporter out to do a remote feature broadcast from the Vince Lombardi Rest Area on the New Jersey Turnpike? Will puritan New York Post scribe Phil Mushnick co-host a smoker at 40/40 with Ray Lewis and Plaxico Burress? Will the Hoffa family be interviewed regarding the urban myth rumors of Jimmy’s remains being part of the Super Bowl endzone? Will sleet or acid rain from Secaucus curtail the Bruno Mars halftime performance?

Sandwiching the Super Bowl disaster will be two outdoor NHL hockey games to be played at the House that Carl Pavano built. The Rangers will again abandon the upgraded Garden to play games in the Bronx al fresco against the New Jersey

Devils and the Brooklyn-bound Islanders. Maybe the solution to the city’s sports franchise housing troubles is to have every team play at the Barclays Center, perhaps simultaneously? When you throw in Nassau Coliseum in Uniondale and the Prudential Center in Newark, the picture gets even more muddled. And more depressing.