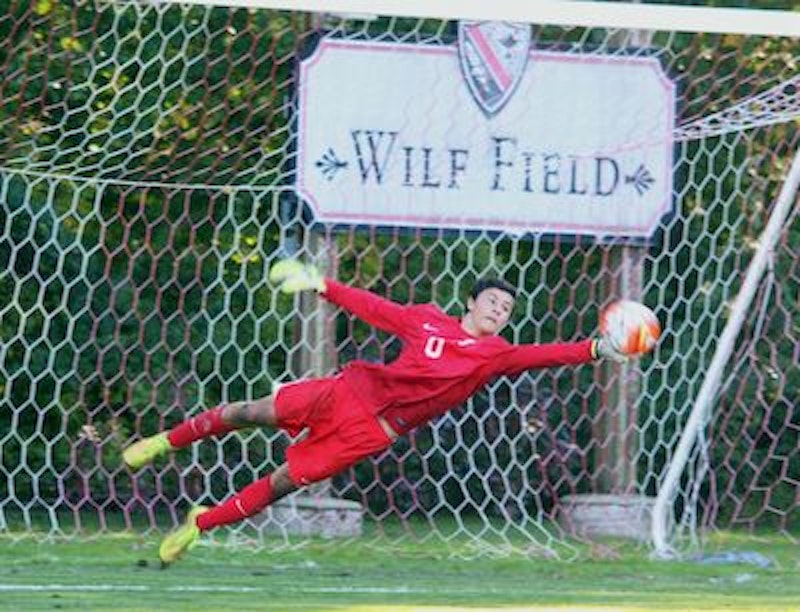 You’re Logan Leppo from Lawrenceville, one of 10 economics majors on the Bard College men’s soccer team. You’re very tan and you’re a junior at Bard and you wear number 99, which kind of gives you a Wayne Gretzky type of deal. You might as well be Gretzky because if you’re one of the 29 people who watch Bard division 3 NCAA soccer you know Leppo is the focal point of the game. Bard goalkeepers have always been the busiest in the Liberty League, and Leppo’s no exception. He’ll wear out three pairs of goalie’s gloves by the end of the 2019 campaign. He came into the Saturday afternoon game at Vassar with 38 saves in the books and added nine more in a cardio-stressed 3-0 loss to the Vassar Brewers at Gordon Field in Poughkeepsie, NY. It was Bard’s 21stconsecutive soccer loss to Vassar since the schools first clashed back in 1994. The loss dropped the Bard Raptors to 1-6, while Vassar improved to 4-3-1.

Gordon Field’s a nice, cozy football ground in the Prentiss athletic complex south of Vassar’s main campus which looks like a Hollywood set of an east coast liberal arts college. (Unlike Bard’s sprawling campus which resembles a retreat center/rehab facility with oddball paths through various forested ravines). Prentiss has a series of maroon scoreboards erected through its acreage which accommodates baseball, field hockey and lacrosse. The delicate grass turf of the soccer pitch took a beating as both squads opened their conference play for this season. Last year, Bard, playing on a new NextTurf surface in Annandale, finished in the Liberty League cellar at 0-9 on a 3-13-1 season. Vassar finished in the middle at 5-4. Bard has a new coach this season, TJ Kostecky, who comes to the D3 program from the D1 Long Island University Blackbirds, who sold their Fort Greene soccer ground in Brooklyn to a developer and forced a soccer merger with its D2 C.W. Post sister school on Long Island. Vassar, meanwhile, has Andy Jennings at the helm for his 29thseason with a sizably larger roster than Bard and more than 250 wins under his belt.

Bard and Vassar are separated by 25 miles along U.S. Route 9, which is also Broadway in Manhattan. Along the Hudson River, which skirts nicely along Bard’s picturesque grounds, the two colleges are separated by 37.7 nautical miles as Gordon Field is roughly two miles from the banks of America’s first river. Along that 25 miles are grand estates like Montgomery Place, Wilderstein country manor, Mills Mansion, the Vanderbilt mansion, the FDR estate and presidential library and Eleanor Roosevelt’s historic Val-Kill cottage. On a grimmer note, the home and makeshift mortuary of serial killer Kendall Francois who preyed on Poughkeepsie prostitutes is three blocks away from the Vassar athletic fields.

The Brewers were in charge of this game, marking a good 75 percent of the possession. Vassar’s keeper, Will Marment, a senior who has attracted attention from the Fleetwood United academy in England, barely faced a single shot on goal. Meanwhile, Mr. Leppo, who wears the captain’s armband for Bard as a junior, was in trouble 14 minutes into the match. That’s when Vassar sophomore Eamon Geraghty of Oneonta, NY, crossed a beauty of a ball onto the head of the poetically named midfielder Hawkins Barratt Heitmann, a junior out of Cutchogue, NY. Heitmann nodded it into Leppo’s net for a 1-0 Vassar lead. Splendid fall weather had a good turnout for a Saturday crowd that woke up to an 8-0 Manchester City drubbing of Watford on NBC Sports. The warm sunshine had onlookers occupying the shady berms around Gordon Field. Stand in close, perhaps behind the goal like I did, and you hear the student athletes uttering urgent communiques. “Don’t let him put it down!” or “It’s not on!” carry mysterious value as the game marches on and the NCAA timekeeper counts the clock down, instead of up like in the professional game.

Leppo, who attended the Hun School in Princeton, NJ, for his high school years, was averaging a save or shot on his goal every three minutes or so. After a save off an in-close free kick just outside his box, the rebound trickled to Owen Fauth in his wedding cake white Vassar kit. The freshman from Keane, N.H., ably tapped it home, sailing past Leppo’s shoulder as he lurched quickly to his right. I was shooting cell phone video of the free kick and felt it was necessary to post Leppo’s agony on my Facebook page right there in the blaring sunshine of Poughkeepsie. I noticed upon replay that Leppo was courteous in his yelling. “C’MON! MARK THEM PLEASE! C’MON MARK YOUR MAN!”

As I spent more time behind his busy goal, I noticed he thanked his defenders for able clearances and clutch plays. His other habits include jumping up to tap his crossbar superstitiously. Leppo also does a qigong energy ball move in which he moves his arms in a circular fashion and joins his hands together while the rest of the Bard XI tries to maintain its shape against much larger foes such as Vassar.

When Vassar went up 3-0 on an own goal off the leg of freshman defender Min Purvis of Woodstrock, VT, Leppo basically lost it. He pleaded for his team to collectively raise its game. He used the Lord’s name in vain several times. It wasn’t his fault that his parry of a shot didn’t carry far enough out of the box and the ball fell to the feet of Vassar freshman Ryan Lane from Santa Monica. It was a stroll on the pier for the lad and Vassar seemed to back off after this backbreaking goal.

I noticed after several of Leppo’s saves that he employed a Pinteresque pause after grabbing the ball. He’d freeze in place, his face down in the grass, his arms around the leather orb. He’d mentally tick off his own personal 20 seconds or so, despite the score. Sometimes he let his discomfort speak volumes in a nonverbal exercise. Many times, it seems he was meditating or considering the wisdom of his athletic choices. Why have I become a Bard College goalkeeper? he was asking. Maybe he was thinking of the Wilfred Brimley manager character in the baseball film “The Natural?” Pop Fisher would posit, “I should have been a farmer.” But Leppo is too young for that and he’s from Jersey. Right now he’s all jacked up and knows a full Liberty League schedule is ahead and that means Union College and Skidmore and St. Lawrence for crying out loud. His energy and quick hands and first step reminds me of U.S. keeper Tim Howard’s 2014 World Cup effort against Belgium in which non-soccer fans heaped praised on a keeper way too taxed, an athlete who should have never faced so many shots from so many professionals and be expected to come out on top in any way.

Still, even down 3-0 late in the game, Leppo was rolling out balls in effort to create deep opportunities for Bard on his goal kicks. Admirable hope in the face of desperation and defeat.
With so many economics majors striding the soccer pitch for Bard, I wonder if John Maynard Keynes has more influence than, say, Frank Lampard or Landon Donovan or even Wayne Rooney.

With nine minutes left, Angelo Chammah, a senior from Paris, France, wearing the Bard jersey cleared a ball from the center area above the box. Leppo thanked him profusely and would later take his sweet time during a goal kick with under five minutes remaining. After the final buzzer, which proceeds in college soccer with an Orwellian 10-second countdown announced from the pressbox, Leppo quietly gathered his green Gatorade water bottle and made the long walk back to the bench with yet another defeat in the books for Bard College. You can only build so much character with so much losing. During the Bard game I was getting texts from a colleague who was following nearby Marist College in an upset bid against 18thranked University of New Hampshire. D1 action stealing the show. Marist lost in two OTs, I was told. I’ll probably see them take on Hofstra next week, as is my wont.

As I walked to my car, I wondered how many times can I keep telling this story of perpetual Bard defeat? Then I thought of the Biblical motto on the Bard College crest from the book of Revelation (which is very metal and I tend to agree with) which reads: “I shall give thee the crown of life.” Wear it.