The 7-time All-Star is retiring. Oh God, where have the years gone? 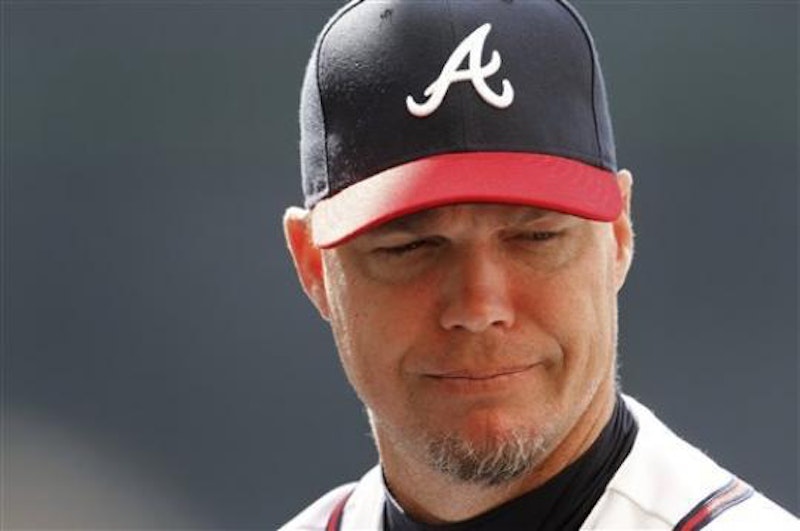 Last week Atlanta Braves third baseman Chipper Jones announced that this season would be his last. Jones has been one of baseball’s best players for much of the past two decades. His upcoming retirement will bring an end to a Hall of Fame career and officially place me in a cage match with middle age.

Jones was drafted with the first overall pick in the 1990 amateur draft. The Braves selected Jones over the much-ballyhooed Todd Van Poppel. The Oakland A’s selected Van Poppel 13 picks later, and rushed him to the Majors at 19 while the Braves took their time with Chipper. Jones played parts of four minor league seasons before arriving in Atlanta to stay in 1995. He has gone on to establish himself as one of the top switch hitters and third basemen in the history of baseball.

I was 14 when Chipper was drafted, a Baseball America subscriber and amateur prospect maven.  I’ve known of Chipper Jones since he was 17 years old. I scratched my head when Atlanta selected him over Van Poppel. I cringed when Jones tore his ACL in the spring of 1994 and had to sit out his would be rookie year. I watched as he moved from shortstop, to third base, to left field, and back to third. I’ve drafted Chipper at least seven times in various fantasy leagues over the years. As Jones went from skinny teen to big league All-Star I went from skinny teen to mid-30s dad. Jones has been an annual part of my springs for 20 years, right alongside blooming flowers, hay fever, and Easter egg hunts.

Jones has been almost ageless to me. He’s just sort of always been around so I’ve never really thought of him in terms of an aging ballplayer. I’ve seen plenty of greats retire over the years but Jones is the first one that I can remember as a prospect. Chipper will be 40 on April 24. That means I’m almost 40. I hadn’t put much thought into the encroachment of middle age until Chipper’s announcement.

My reaction to Jones’ retirement has surprised me. I’ve always respected Jones, and loved how he’s torched the Mets, but I’m not a Braves fan so I’ve never had a personal attachment to him. He should be a no doubt first ballot Hall of Famer, but we know how that goes. Jones is right there with Mickey Mantle, Pete Rose, and Eddie Murray as one of the best switch hitters ever. You could make a compelling argument that Chipper is the greatest third baseman of all time.  He played on teams that won 11 consecutive National League East championships. Jones’ on field accomplishments are numerous and impressive but the name “Chipper” will always remind me of a couple of skinny teenagers from the early 1990s.