Don't Be a Human Bowling Pin 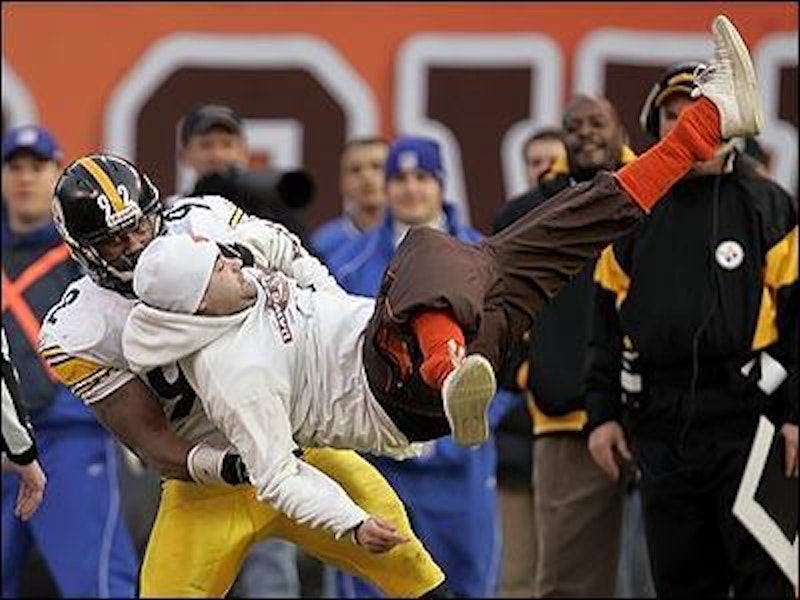 I’ve noticed that people like to talk about other people’s traffic mishaps in disparaging, had-that-been-me terms, to ascribe to themselves a sort of innate hyperawareness whereby hydroplaning skids or three-car-pile-ups or collisions with wayward wildlife might be sidestepped were preternatural ease. This is unsubstantiated bragging, of course, and utter bullshit, because neither you nor I have any idea how we would react in an extraordinary automotive circumstance, unless it actually happened. The phrase “the rules of the road” can be interpreted in any number of ways, but it goes without saying that competent driving involves tuning out distractions and concentrating on traffic signals, weather conditions, and other motorists. The danger of injury or fatality is very, very real, and your rate of survival is predicated on how much aware you are of your surroundings.

If you’re loitering on the sidelines of a National Football League game, your likelihood of being involved in a collision with a running back and a defender on Sunday is probably higher than the chance of me crashing into a highway divider en route to work tomorrow. There’s a sickening feeling that comes from watching two or three mighty gridiron gladiators collide in slow-motion, helmets meeting at Mach 4, bodies falling broken to the Astroturf, but that feeling is leavened by the fact that everybody who suits up and takes to the field has undergone intensive conditioning, was mentally prepared ahead of time, knew the risks, even if foreknowledge isn’t enough to curtail the agonizing pain that often accompanies athletic injury. Football coaches and principals know what’s up, and it’s rare that sidelined offensive and defensive players wind up hurt when the action strays from the field; usually they’ve the presence of mind to help the fallen to their Nikes and offer a bit of encouragement.

But what of the common NFL class, if you will: the anonymously bundled team representatives, the NFL officials, the cheerleaders, the network talent and cameramen and sound people, the agents, and random bystanders who seem to be down there every game for no apparent reason, pacing or lounging or just taking up space? Are these people, like, aware that at any given second a runaway play could go nitro and beyond the boundaries? I would argue that they are resolutely unaware and indifferent, because inevitably, when the networks replay a sideline bystander being trampled in a padded stampede, that person isn’t even watching the field, as though peering into the crowd or exchanging small talk or yelling into a cellular phone or fiddling with equipment is somehow more important than one’s personal safety in the face of unpredictably, culturally sanctioned acts of violence that could crack one’s skull open at any given moment. Wise the fuck up, common NFL class!